Ubisoft today dropped a healthy amount of news for its upcoming multiplayer hack-and-slash game For Honor, including dates for a closed alpha, a PC version and the contents of the collector’s edition.

For Honor was initially announced for PlayStation 4 and Xbox One only, but Ubisoft has now enlisted developer Blue Byte to port the game to PC. It will only be available on Windows, not macOS or Linux, and Ubisoft says Blue Byte will “create a tailored and fully optimized experience on PC platforms that supports mouse and keyboard controls, giving PC players the option to choose how they play For Honor.”

Excited players can choose to order the Collector’s Case, only sold through Ubisoft’s Uplay service and pictured below, which includes the following:

For Honor Gold Edition: the base game, the Digital Deluxe Pack from the Deluxe Edition, and the full Season Pass

However, any player who preorders will get the Legacy Battle Pack with three hero outfits for the Warden, Raider and Kensei characters.

The game, which releases on February 14, 2016, will give some players an early test run through a closed alpha, which runs from September 15 through 18. You can sign up for a chance to be in the alpha on the game’s official site.

For more about For Honor, check out our latest preview. 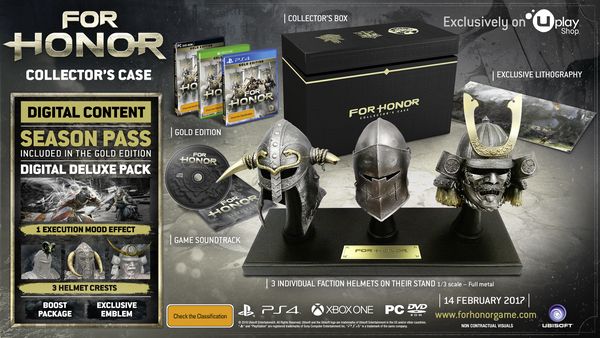