What a time to be alive. With indie developers rapidly establishing themselves and breakout hits popping up more frequently than the newest Call of Duty or Assassin’s Creed entry, keeping your thumb on the pulse of games on crowdfunding platforms or Greenlight can net you a first glimpse of some of the most interesting and innovative games ever made. OBEY is one of these: not only the best bunny murder simulator since Skyrim but a singularly complex game where the balance of power is constantly in upheaval and coercion is king. I was lucky enough to play a couple of rounds with the game’s developer, Daniel Dez, and cannot recommend the experience highly enough.

In OBEY, every player is a fluffy white rabbit initially spawned haphazardly across a map. The terrain is hilly and features water formations, grassy cover and an enormous robotic simian along one of the borders. Dormant at the beginning, the robotic chimp is armed to the teeth with rockets, a gatling gun, defensive turrets and a flamethrower. Players vie for control of the mechanical monstrosity in order to exert absolute power over their rivals as well as gain a healthy boost to their income. 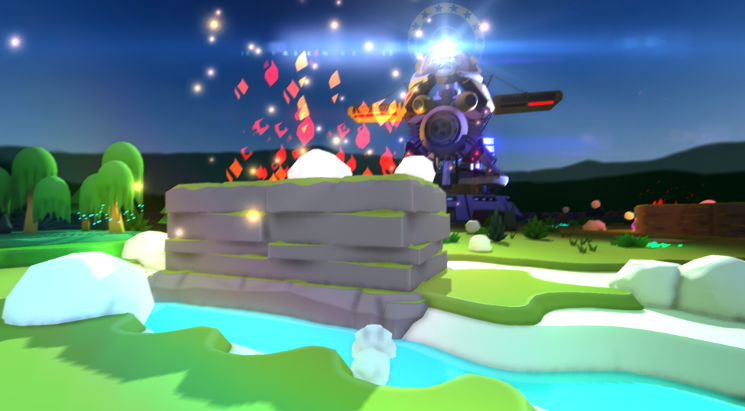 The objective of OBEY is to amass a certain amount of funds. Players passively generate income by existing, and there are two main methods of increasing your cash flow: first, gaining control of the monkey mecha gives you a gigantic boost to your income generation that only increases as you exert control over the bot for extended periods of time and, second, bunnies can receive money directly from the player controlling the mech by listening to his or her demands and providing them with goods.

Players in control of the robot can call in an expensive dropship which serves two purposes. First, it allows for the delivery of supplies that the robot-controlling player can use to further exert control over the hapless rabbits before him. Second, when a rabbit is executed, they are sent to the dropship instead of spawned randomly on the map and their income generation is neutered for that time. The dropship fundamentally alters the playing field. Before its appearance, bunnies have no incentive to listen to the robot-controlling player and can constantly rush the front door in an attempt to gain control of the massive bot. After, however, incentives to submit in the form of additional cash bonuses from the robot as well as throttled cash flow from execution are healthy reminders that subversion and anarchy might not be the best route.

A number of complex interactions can unfold following the addition of the dropship. Executed rabbits can expend large amounts of their personal funds for heavy items that can disrupt and potentially crash the dropship, but failed attempts leave large amounts of the valuable items on the field for the robot player to force players to collect for his own gain. Missiles, flamethrower fuel, charges for the turrets, laser walls, mines and more can be shipped to the field but only places by rabbits outside of the robot under the watchful eye of their simian overlord, who in turn tips them for their own self-effacing service. 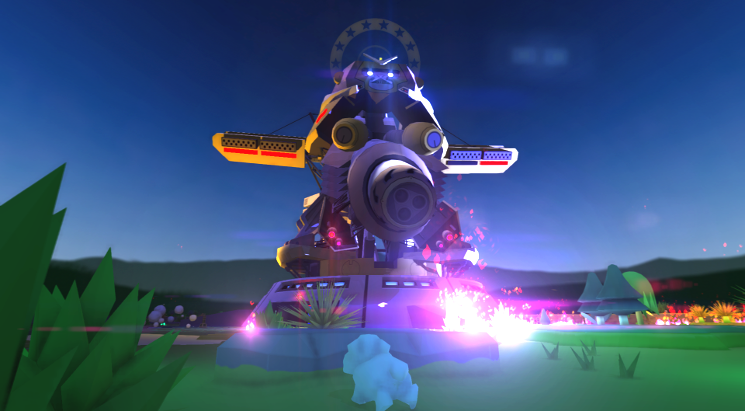 What results from all this is a tense, fast-paced King of the Hill-type encounter where the balance of power is constantly shifting and is not always in the hands of the only person with actual weaponry. Playing into the overlord’s hand can be more lucrative than attempting to constantly subvert, creating a bizarre and uncomfortably totalitarian-feeling experience, whereas once the dropship is eliminated complete anarchy can erupt with players casting off their tracking collars and bum-rushing the robot for control.

Daniel Dez, founder of the Lo-Fi Apocalypse, has worked on titles including F.E.A.R 3, Madden and Leisure Suit Larry is the mind behind OBEY and clearly has set out to create something never before experienced. If coercion/anarchy-heavy multiplayer games exist, I’ve never run into one that generates such a tangibly tense and convincing atmosphere of oppression and conflict. Fund the Kickstarter today. Seriously. 15$ nets you a copy of the game and higher tiers include multi-packs, beta access and more.