Get ready to light up the skies of Los Santos with your all-new Independence Day Special fireworks, stars-and-stripes tees, and monster truck mayhem in a special 4-day Rockstar Social Club Event this weekend, Thursday July 3rd through Sunday July 6th. San Andreas will be celebrating the birthplace of freedom with big RP & GTA$ bonuses, patriotic discounts at Ammu-Nation, giveaways and lots more – all as part of the Grand Theft Auto Online Independence Day Event Weekend.  Details of the event are as follows:

The “Independence Day Special Event” Playlist is a special selection of some of the brand new Rockstar-created Jobs published this week including specific Races for the new vehicles that were announced earlier this week in the Sovereign motorcycle and Liberator monster truck. This weekend only (starting this Thursday), this Playlist will score you Double GTA$ and Double RP. To access the Playlist, just go to Online > Playlists > Rockstar Created in the GTA Online Start Menu and select “Independence Day Event” from the options listed. Alternatively, hit the Event button in the GTAV loading screens to launch straight into the Playlist.

Merryweather Security is also getting in on the celebrations with a 75% discount on Airstrikes all weekend. To call in an Airstrike, call Merryweather from your in-game phone, select ‘Airstrike’ and then drop a flare at your target position and unleash hell upon your enemies.

25% OFF HEAVY AMMO (FOR RPGs, GRENADE LAUNCHERS AND MINIGUNS) – COURTESY OF AMMU-NATION

Ammu-Nation is “sponsoring” the event, and Ammu-Nation believes believe that all Americans should have access to military-grade weapons without a ‘defense budget’ price tag. As such, all weekend, you can head into an Ammu-Nation and get 25% off ammo for RPGs, Grenade Launchers and Miniguns.

Pegasus Lifestyle Management salutes your independence by giving you the freedom to call in any over-sized vehicle at absolutely no charge. Take advantage of the weekend-long offer to get to grips with the brand new Liberator monster truck, and spend 4th of July Weekend crushing cars into the ground.

However you’re commemorating the Fourth of July this weekend, Rockstar wants to see those Snapmatic pics showing your love for Old Glory. Whether you’re rolling over foreign compact cars in the Liberator monster truck or setting off some fireworks in the yard of your new Paleto Bay abode, share your most creative, amusing or beautiful patriotic snaps for a chance to win 1 million GTA$ and an AMERICA vanity license plate for your in-game vehicle.  To make your shots eligible for entry, simply log in to the Rockstar Social Club and tag them #INDEPENDENCEDAY between now and the end of Sunday.

Join Rockstar at 2pm ET this Thursday July 3rd for the revolutionary Rockstar Games Official Event Weekend Live Stream, showcasing a grudge match nearly 240 years in the making: it’s America VS Great Britain – The Rematch – all hosted and commentated by Lazlow and the rest of the Rockstar Broadcast studio team. Both teams will be battling through a Crew Head to Head playlist featuring all the new Jobs from The Independence Day Special. Rockstar will be streaming the show across the Social Club Events page, the Rockstar Games Twitch Channel and the Rockstar Games YouTube Channel page.

Finally, Rockstar will be giving away 5 exclusive prize packs of suitably patriotic and rare GTA gear in the Independence Day Gear Giveaway Sweepstakes. Each pack will include a GTA IV Aluminum Bat, Patriot Beer cup, GTA IV foam finger, Statue of Happiness figurine, plus a GTA V Los Santos Lifeguard tee and a Vice City beach ball. 10 runners-up will each get GTA V tee and stickers. You can enter to win right now through Sunday at http://socialclub.rockstargames.com/events. 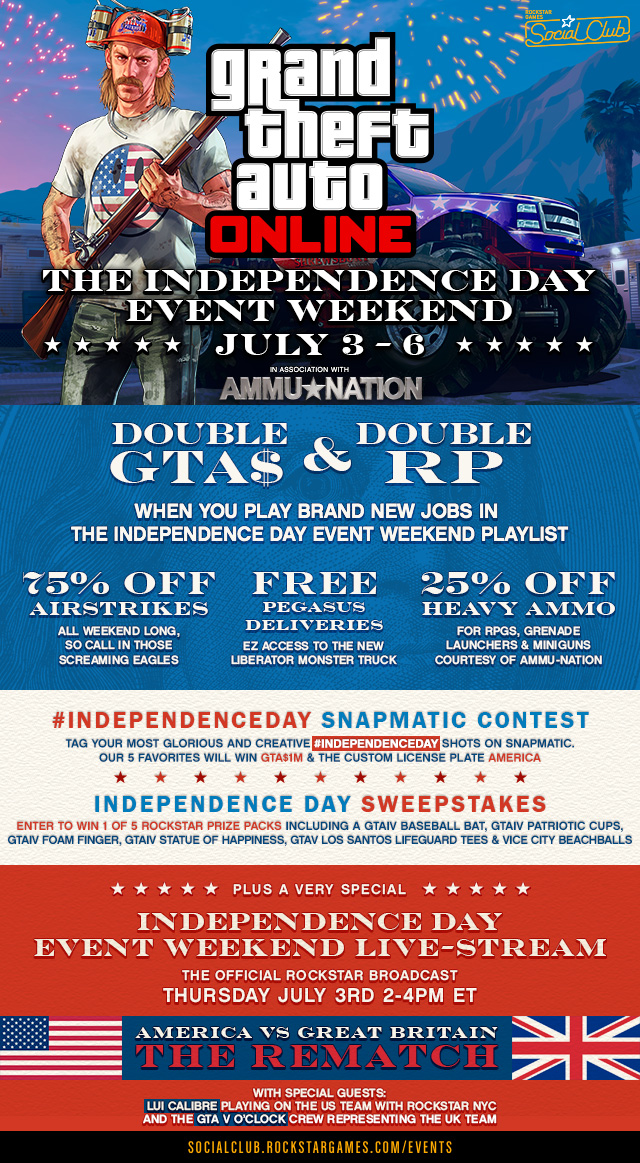