Check out a Variety of New Inclusions to Monster Hunter Rise: Sunbreak

They say you can never go home again but maybe it’s just because they haven’t tried it with a big enough gun.  Therion may not be a scientist but he’s going to put that theory to the test, heading into the formerly-lost fortress of Valfaris to find out what happened.  His home disappeared years ago and reappeared as a corrupted ruin, so with gun, sword, and energy shield Therion will tear his way to its heart.  Valfaris (game, not fortress) is a 2D run & gun in the classic style, featuring big guns, ugly baddies, and a killer soundtrack to score the constant action.  You can read more about it in a preview or find out for yourself with the PC demo, which should do nicely towards getting ready for the big-box Signature Edition Games release.

There will actually be two versions of Valfaris released, with the standard PS4 and Switch editions available through Merge at retail while the fancy Signature Edition is live for pre-order (Switch here, PS4 here) right now.  The picture below tells most of the story of the game’s contents, in that it includes the game, two pins, a soundtrack, a signature card, and an art card.  It leaves off the prices, though, which are $49.99 on Switch and $44.99 PS4, which is the Signature Edition series-standard of being $15 over retail.  It’s a nice little bundle of extras for the collector who wants something nice but not budget-destroying on the shelf. 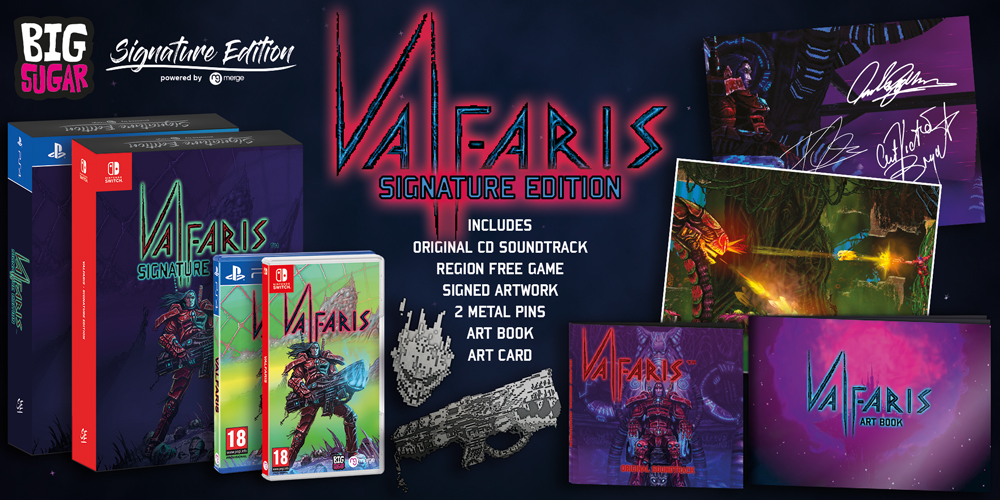