In this week’s Textual Stream, Microsoft’s creative director Adam Isgreen continued to tease the newest upcoming addition to the Killer Instinct roster without being nice enough to just give us a full reveal already. According to Isgreen, the character was focus tested in both Orlando and Chicago at some point last week with largely positive reactions from those that played with him.

So what exactly do we know about the mystery character so far? Well, we are given a brief summary of his fighting style, that he has been classified by the developers as a “trap grappler,” and that he is most certainly not a mummy (complete with their in no way suspicious #notamummy hashtag). According to the latest update:

“He’s a zoner… with a ranged grapple… and great (situational) mobility… and traps… oh, and curses too. Internally we call him a “trap grappler”, but I don’t even know if that’s the best way to describe him. When can you see for yourself? In his trailer and release in November.”

Beyond that, Isgreen is being very tight-lipped about any further information on Mr. Notamummy. He refuses to even mention a name, stating that sort of information will all be covered in an upcoming trailer. We do get a bitty peak at the guy’s leg and, while I am no expert on mummies, it certainly looks like a mummy leg to me. This might be the ultimate mummy cover-up we are witnessing right now. 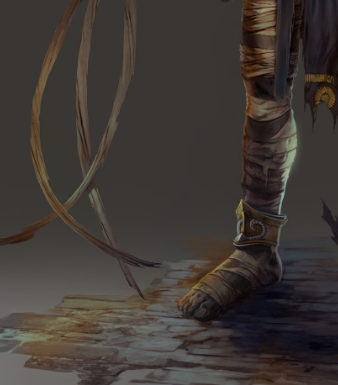