There is no problem that can’t be solved by the correct application of a giant mech.  Admitted, they’re far more useful for repelling an alien attack than, say, knitting a blanket, but that’s only because the bulk of its awesome colossal might would be wasted on the latter activity.  Fortunately Devader is all about heavy application of force to an unknowable alien threat, tearing through the bizarre masses with twin-stick firepower and a host of useful abilities.  The city of Matrix is under attack and slowly shrinking as the enemy waves take out one hexagonal tower after another, but maybe with enough firepower and the right upgrades the heart of the city can survive.

At the start Devader is pretty straightforward.  A large city made of hexagonal towers sits in the middle of the screen with spider-bots swarming it from every side, and the mech shoots everything.  Its bullets don’t have an effect on the city so it doesn’t need to be too careful so long as the Krin aliens are annihilated.  Power-ups drop generously from the skies, and by level’s end the mech’s single shot is a giant multi-bullet fan of destruction.  It’s nice while it lasts, but then the level is over and the proper power-up path begins.  A friendly saucer calls you home to rest and upgrade, with two skill points available to spend on two new abilities, and while it’s not obvious at the start this is where Devader starts coming into its own. 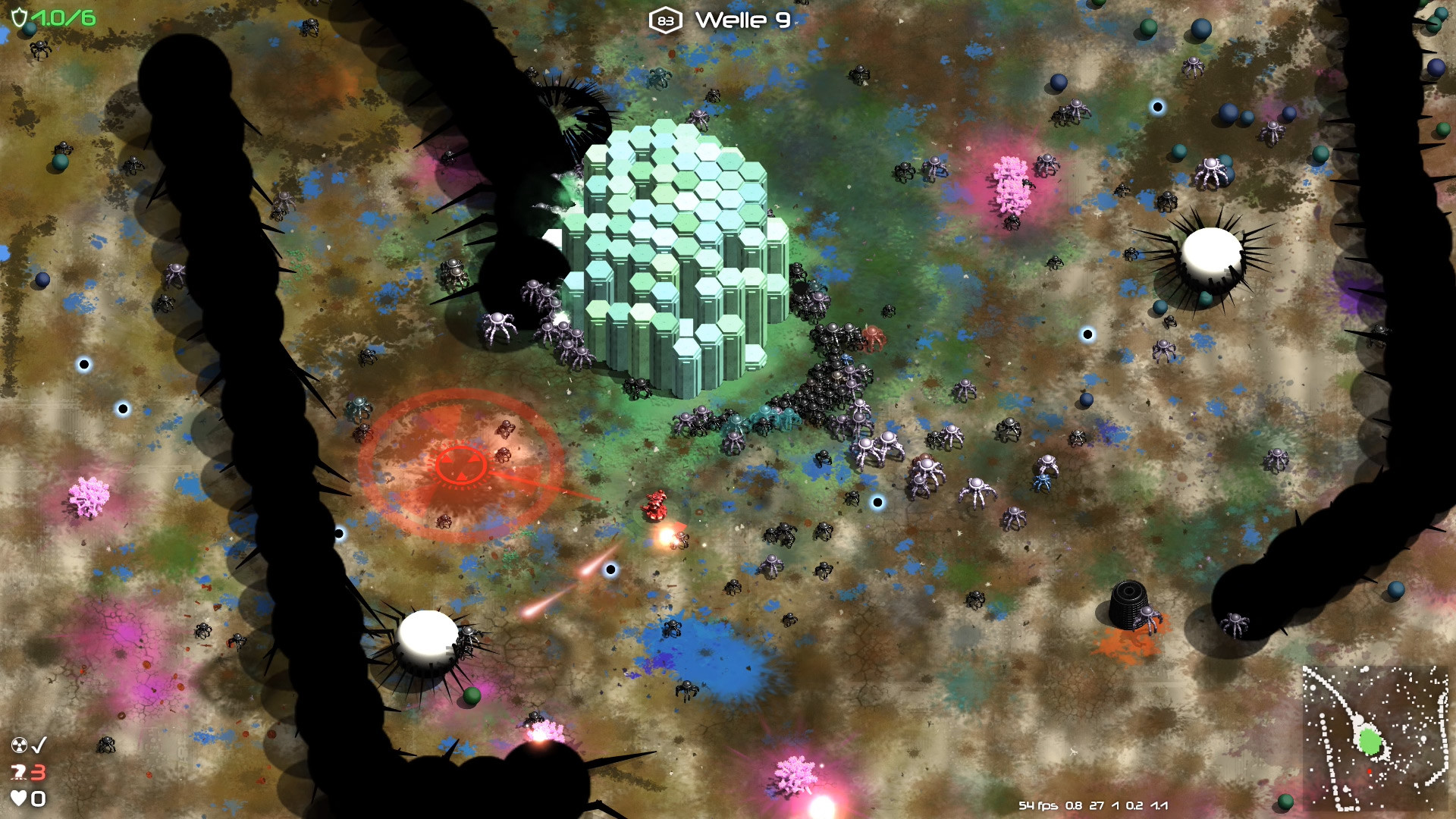 There are twelve different categories to choose from, enhancing stats such as armor, shield, weapon power, speed, turret strength, etc.  It’s fairly standard on the surface, but as it turns out the upgrades you choose determine the enemy layout of the coming levels.  A mech focused on speed and power will get different encounters than one that acts as support for powerful turrets.  This is most obvious with the major and mini- bosses, but the standard enemy waves get some nice variations as well.  There are enemies I’ve only seen once, although seeing as I personally tend to focus on speed and power that’s probably why, but the result is a game where the levels I see can be very different from what you might experience.

While the upgrade paths are left to player discretion, there are a number of standard abilities that get awarded as the levels go by.  You still have a choice, but it’s between two predetermined options.  Everyone gets a power attack whether it be an area-clearing blast centering on the mech or a more powerful nuke that takes a second to drop onto a target at the end of the aiming line.  There are also two types of turrets, two kinds of power-shots that require you to stop firing for a second to charge up, and a phase-dash (just the one kind) to dodge the un-dodgeable.  It sounds like a lot but the abilities are introduced one at a time, plus Devader is designed with replay in mind.  You only get so many lives and continues, so maybe next run will go better. 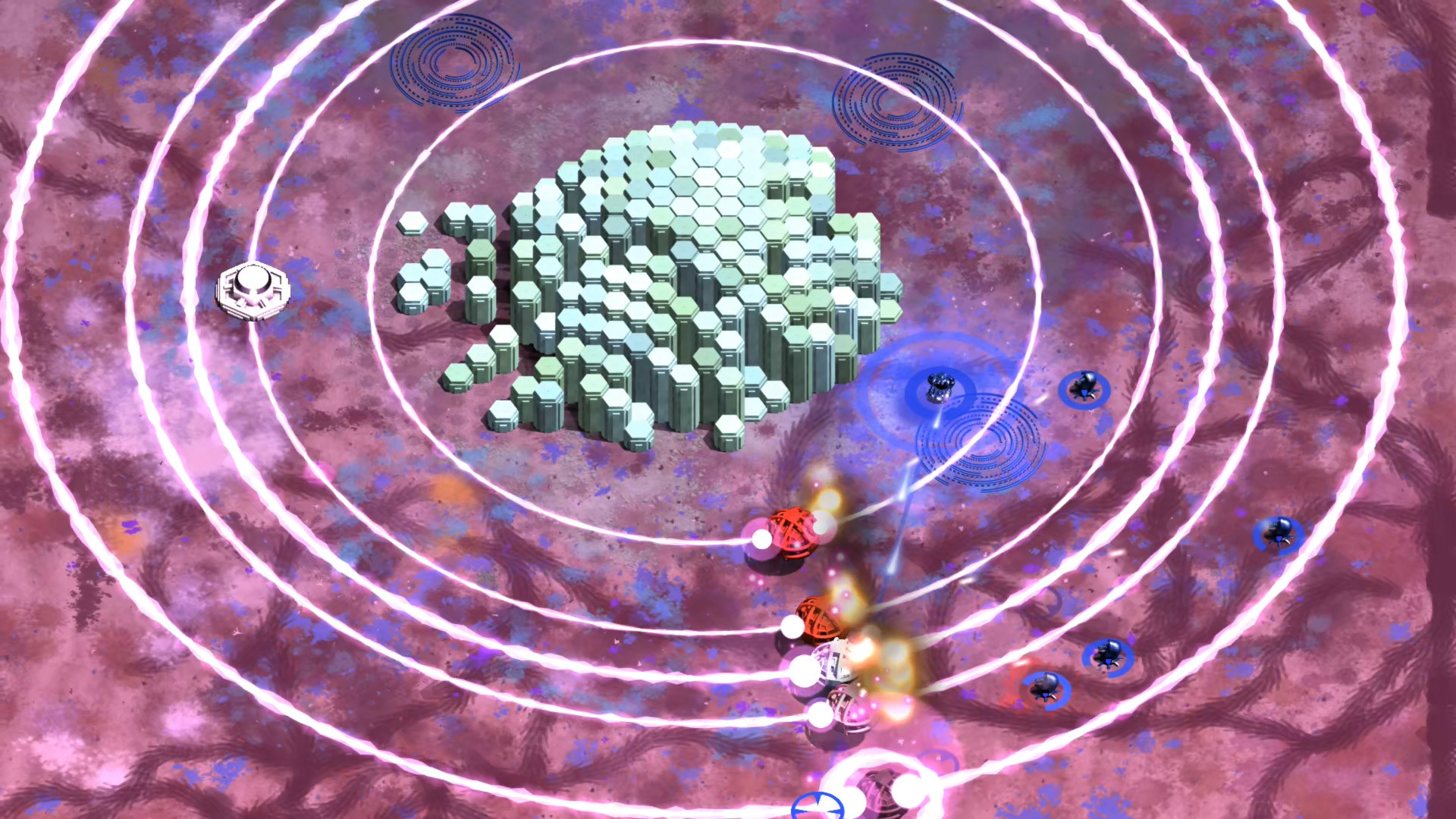 If this makes it sound like Devader’s mech is maybe a little overpowered, it’s really not.  The alien attack is ferocious, coming in large numbers and huge (and creepy) variety.  There’s a very clear art style to its designs, like a cross between a 1950s terrible sci-fi movie and weirdly leggy/spiny ocean creatures.  They’d be more unsettling if there was time to really take them in, but for the most part the creatures attack in such large numbers that they just have time to register as bizarre before you need to figure out how to avoid them.  The giant triangle made of pulsing sea urchins may be weird, but it’s also throwing off enough bullets that the weirdness will have to wait.

Devader is a fantastic and deceptively deep twin-stick shooter arena shooter, where each run can play out differently than the last depending on player choice.  There’s very little in the way of randomization but rather tons of options to select that determine the path through the Krin armada.  The enemy patterns are nicely creative, switching between popcorn encounters that are fun to blast through to bigger set pieces then back again, and it ramps up fairly quickly in difficulty and spectacle.  There’s a fairly hefty demo available on the game’s Steam page, although it was made before the phase shift ability was added, but even so it’s well worth checking out.