Gather Your Friends for The Jackbox Party Pack 8

After being in Coming Soon status for a few weeks, LEGO Star Wars Battles is now available for Apple Arcade across all compatible devices. Long known for delivering fast-paced action-platforming, this LEGO Star Wars adventure focuses on RTS-style action across many famous locations throughout the Star Wars universe. Naboo, Hoth, and Endor are just a few of the playable locations and the game lets the user play as both good and evil with the end goal being to take out enemy bases and/or wind up with the most towers left standing. This is one of the few games I can think of that keeps the portrait mode structure of a mobile device intact on TVs with a large pillarboxed border. 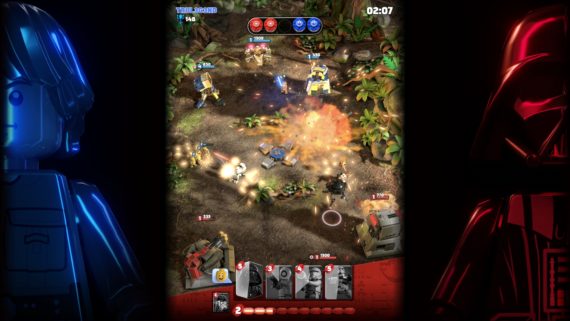 This enables the game to be playable on more devices than normal, as there are some Apple Arcade games that lose widescreen device functionality due to this not being – like Layton’s Mystery Journey. The core gameplay integrates the Star Wars universe into tower defense/RTS gameplay fairly seamlessly and while it isn’t likely to be a must-buy for die-hard RTS fans, those looking for a gateway game to get them into the genre may have found just the right game to do it. The tutorial eases players into the genre quite nicely and makes what can be a daunting genre more accessible. Apple Arcade users can check out LEGO Star Wars Battles now for Apple TV, Macbook, iMac, iPad, and iPhone now.