The PC version of the forthcoming Life Is Strange Limited Edition has approximately 1000 copies left in stock, publisher Square Enix has revealed.

According to a post on the Life Is Strange subreddit, Square Enix sent out an email warning fans of the episodic adventure title that its stock at the Square Enix Store is depleting at a reasonably fast pace.

Reddit user Timewinders posted a screenshot of the email received from the publisher (see below), with the message reading as follows: “We’re down to our very last quantities, so order yours before they’re gone for good!”

“I just got an email from Square Enix saying that there are only 1000 copies of the PC version left,” Timewinders wrote on a thread. “It’s cut off in the image, but the subject of the email states it’s just the PC version that’s at less than 1000 copies, not the other versions. Just thought you might want to know since not everyone’s subscribed to Square’s emails.” 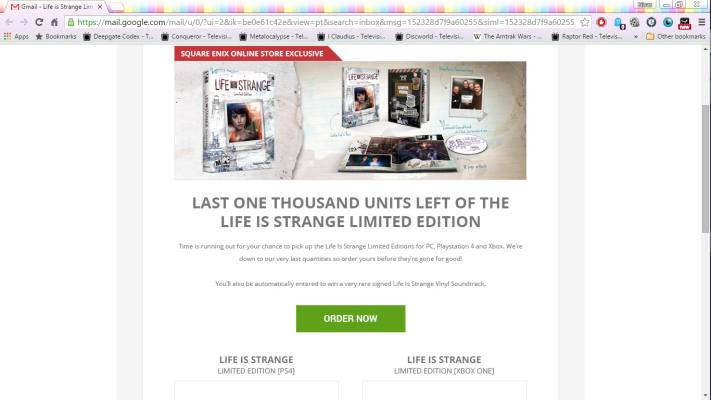 Square Enix announced last year that Life Is Strange would be receiving a physical release in 2016, having had its fifth and final episode, Polarized, wrapping up the digital release of the title in October 2015.

Life Is Strange Limited Edition contains all five episodes on a single disc, a 32-page art book, director’s commentary and the official soundtrack.

Square Enix has the Life Is Strange Limited Edition slated for release in North America on January 19 and January 22 in Europe for PlayStation 4, Xbox One and PC.

Last week, the voice actor for Life Is Strange protagonist Max Caulfield, Hannah Telle, openly expressed her interest in reprising the role for a sequel — that is, if it actually happens and the heroine returns — claiming she would not turn down the opportunity should it arise.