M2 loves you.  How much do they love you?  So much that its working on porting Battle Garegga to PS4 as part of its new ShotTriggers line that also includes Dangun Feveron.  That’s an incredible lineup, and even moreso when taking M2’s well-earned reputation for perfect emulation into account.  Battle Garegga was a much-loved vertical shooter and its Saturn port regularly sells for $200 – $250 or more, so there’s definitely demand for this game.

Battle Garegga is an industrial-themed shooter set against a backdrop of heavy machinery with a military feel to its design.  The game had a few defining traits that tend to be fairly polarizing, in that the bullets aren’t a garishly-contrasting color to pop out from the background and the medal system can lead to wildly varying scores.  Like Raiden Fighters, medals drop from certain enemies and each one collected increases the points of the next.  Missing a 200 point medal isn’t a big deal but the value of the next one drops down to next to nothing, so missing a medal worth several thousand can have far more of a long-term effect on scoring than just a few lost points.  Combine that with the easily-overlooked bullets and Battle Garegga could be viewed as a relic from the 90s, but the shooting action is excellent.  It just takes a bit of getting used to for its gameplay systems to shine, and once they do the game stands out as a classic.  Soon enough it will be a classic you can play on a modern system and buy for a reasonable price, and that’s something to look forward to. 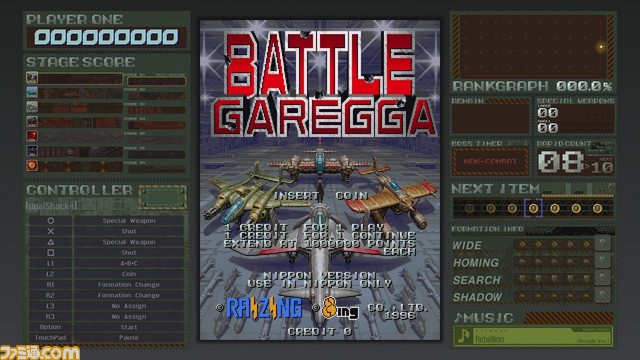