After it was announced earlier today that Europe would be receiving two special edition 3DS consoles themed after Luigi and Zelda, a whole other Monster Hunter 4 variant console was revealed. Launching on November 7 in Japan, the console is a light blue and features the game’s name as well as a silhouette of one of the monsters, all in white. The set includes both the console and the game itself and will run 19,800 yen (about $200).

With three revealed today alone, there’s beginning to be so many 3DS variants starting to not feel special anymore. But oh well, at least there’s a solid black one so we can’t complain anymore. 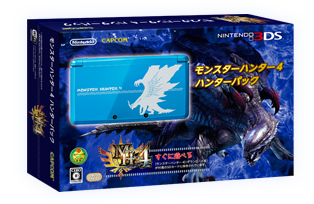