Hot Wheels Unleashed is on pace to be a top-shelf arcade-style racer and something that should be played by anyone who loves those – and that’s just based on a preview build from a couple of months back. Today, Milestone and Mattel announced a massive DLC plan that spans not only legendary Hot Wheels cars – but also major licenses like Street Fighter, Superman, Batman, other DC characters, and even the Teenage Mutant Ninja Turtles. Free and premium DLC will be released with new vehicles, track builder pieces, customization pieces and expansion sets.

There will also be three content passes alongside limited-time challenges to help ensure the game gets regular play from users. The first pass will be available at launch and will include 10 vehicles from brands like DC, Street Fighter and TMNT alongside Batman DLC. The full game launches on September 30 on the PS4, PS5, Xbox one, Xbox Series S and X, Nintendo Switch and PC via EGS and Steam. 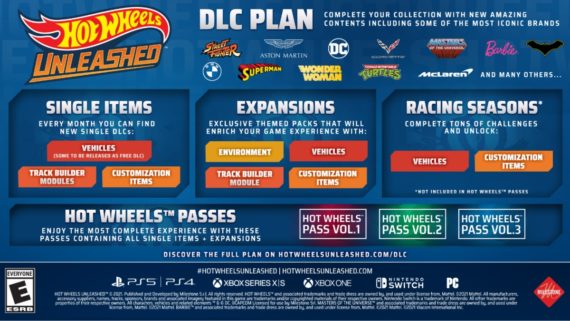