Nintendo is promising a lot of news during the month of December and one which we can look forward to is the announcement of a new Pokkén Tournament competitor. Speculations on the next character are running rampant until the big reveal on December 10.

There seems to only be one clue as to which Pokémon will enter the fray.  The Pokemon’s Japanese name contains the “ン” character which is the letter “n.” Now, there are plenty of Pokémon with that letter in their names, 180 possibilities to be exact. One of the most fan-favorite characters from Pokémon Black and White is N, a mysterious young man with strange ties to the Pokémon world. His signature partner is Zoroark which doesn’t have that Japanese letter in its name but it does look very close– ゾロアーク. Chances are low it would be N but Zoroark would be a fantastic addition to the game. 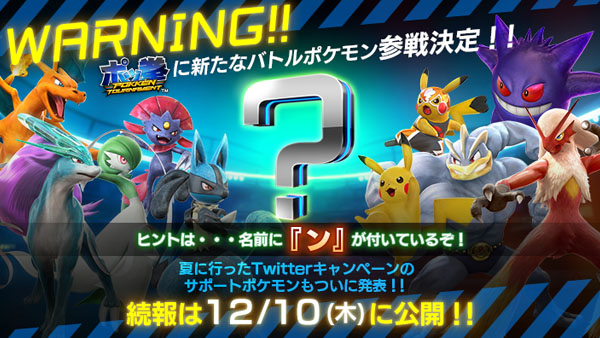 Along with a new fighter comes another support Pokémon. The official Pokkén Tournament Twitter account held a poll recently where fans could vote on the next supporter to be included. The support Pokémon have a variety of skills, some can even help heal you during fights, whichever Pokémon is revealed will surely need to be battle-ready.

Pokkén Tournament is playable now in Japan via arcade cabinets but will be available for the Japanese Wii U on March 18. The game is set to arrive in North America this spring, so there shouldn’t be too much more of a wait.