Today, a Pokémon livestream is taking place for Sword and Shield which lasts for 24 hours. Fans can tune in and try to see if anything new pops up! This is research conducted by Sonia, the professor’s assistant. Whether or not it will be part of the real game is yet to be revealed. So far, we were able to spot familiar Pokémon and an interesting new one that have never been seen before, sort of!

Glimwood Tangle is an area found in the Galar region. The ecosystem consists of mushrooms and plants with very low amounts of light. You could hear cries of Pokémon and some rustling of leaves, even a bit of camera interference. It took patience but we were able to see Pikachu scatter across the screen. A bunch of Morelull popped up while other Pokémon floated by. Impidimp made an appearance by sneaking around the area.

We’ve only gotten some peeks at new Pokémon. Nothing really concrete. However, there is evidence of a Galarian Ponyta which possibly means Rapidash as well. Serebii noted Ponyta’s cry could be heard at one point and a colorful mane appears. Then, this clip shows a galloping Pokémon which is very similar in appearance to the Kanto Fire-types, you can see the image below. If it turns out to be true this could be a Fire/Fairy-type combination. Further confirming our theory is the full image below complete with dark color horn also seen in this clip. It’s even showing off some flashy power in another short piece of footage. Two of them showed up to play around in front of the camera, one even glowed. Junichi Masuda has even retweeted fan art of the Pokémon being called Galarian Ponyta helping to confirm it being true. 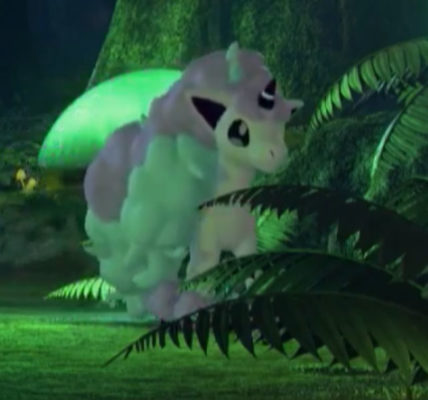 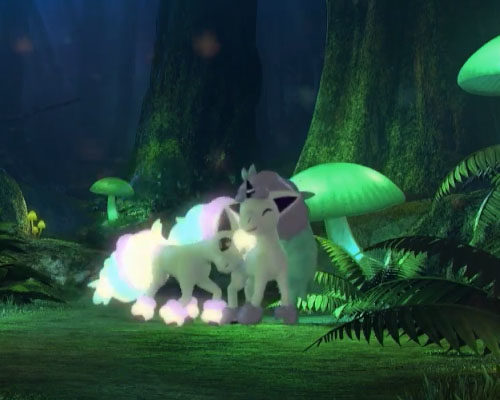 Also, just because these Pokémon appear in the livestream doesn’t mean they are guaranteed to show up in Glimwood Tangle or only in this location. It could just be for the promotional footage but it is also very likely to be true. Pokémon Sword and Shield will launch on the Nintendo Switch November 15. Perhaps there is still time before then to receive even more news, so stay tuned!