The future of VR is clear, in that it will be an all-in-one unit that’s easy to wear and offering crystal clear visuals.  This is all very well and good for the people in the future but for those of us stuck in the present we’re still seeing it happen bit by bit, stretched out over a long series of years that will seem like they went by far too quickly when looked at in retrospect.  The PS1 and Battle Arena Toshinden were about what, five minutes ago?  The point is that the future is coming but we need to get there first, and today Oculus announced the second step in its two days of VR revelations.  Yesterday’s all-in-one Oculus Quest is a good first effort towards where VR will eventually be going, but the hardware demands of today still mean that a dedicated PC or gaming console wired up to the headset is the way to go for the high-end experience.  That’s where the Oculus Rift S comes in.

Based on the stats it’s hard to call Oculus Rift S a true next-gen VR upgrade but rather it sounds more like the PS4 Pro/Xbox One X, in that it’s a very nice upgrade in very many ways.  The two biggest features are an increase in screen resolution, from 2160 x 1200 divided evenly between two screens to a single 2560 x 1440 screen.  This is enhanced by new lenses that almost eliminate the god ray effect on bright objects, and with any luck between these two features that will help make text properly readable in VR.  The other major enhancement is the addition of five cameras on the casing of the headset itself that completely replace the old external sensors, with two facing front, two on the sides angled down, and the last on top of the headset pointing straight up.  While I’m not at GDC for a hands-on test, word is that despite these cameras all being front-oriented the handsets still manage to track well enough when reaching behind.  (Pure speculation- if you’re not looking then maybe 1:1 precision handset tracking doesn’t matter so much and the internal sensors are enough to get the job done.)  As for the handsets, these new versions are roughly the same as the old except the ring is on top instead of below, making it easier for the headset cameras to see them.  The Start and Menu buttons still seem to be under where your thumb will go when using the buttons or stick, but hopefully will be far less easy to accidentally hit than on the original design. 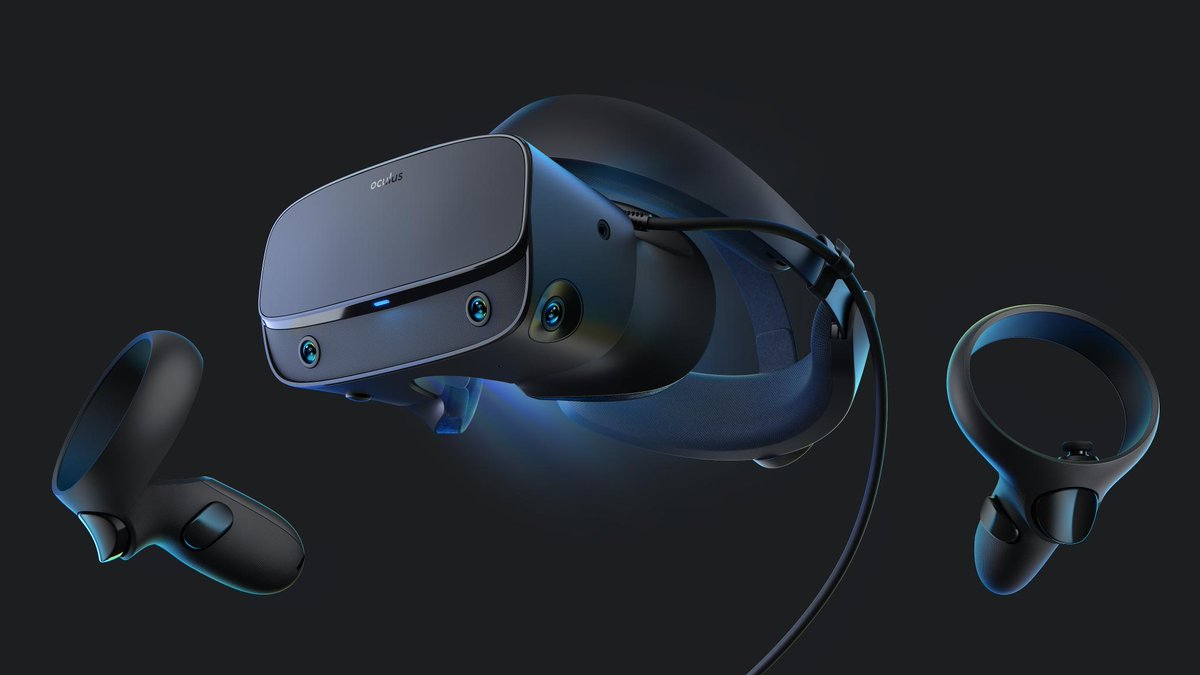 These upgrades come with a few trade-offs, though, the first of which is that the screen is no longer an OLED but rather a fast-switch LCD screen, which means there’s a backlight involved leading to less-pure blacks.  Additionally, while the LCD is “fast switching”, it’s not 90hz fast but rather 80hz, an 11% drop in framerate.  How noticeable this will be will require hands-on testing, but on the plus side what this means to current Rift users planning on a hardware upgrade is that there shouldn’t be too much need to worry about the graphic card requirements.  The recommended specs get a mild bump, with the low end changing from supported to not being guaranteed, but so long as you’ve got better than a GTX 960 you should be fine.  The final new hardware trade-off is a loss of the built-in headphones, which have gotten replaced with speakers instead.  There’s a 3.5mm jack so you can plug in your own headset, though.

All these trade-offs come in service to the price-point, which will be $400 on release.  That’s about $50 more than the old version of the Rift at current pricing, which isn’t too bad at all for new buyers but maybe something to cause second thoughts in people considering an upgrade.  Reading between the lines and going with pure conjecture, it doesn’t seem too unlikely that the original $600 price-point of the Rift (without the launch-price $200 controllers) taught Oculus a lesson in consumer acceptance that it doesn’t want to learn twice.  There’s going to be plenty of debate on “Why not this?”, “Why not that?”, but while something like the Vive Pro easily beats the Rift S on overall stats it’s also twice the price for the headset alone.  Even so, if the trade-offs in tech make you step back with a wait and see attitude that’s absolutely reasonable and I’m right there with you.  The hands-on reports coming from GDC seem generally positive, though, so I’m waiting with optimism.

The Oculus Rift S comes out sometime this spring, with no set release date beyond the three month window.  Take a peek at the reveal trailer below to see it in all its prerendered glory.