One Piece, the long-running and very popular manga and anime series about a boy who journeys with friends with the goal of becoming King of the Pirates has been churning out an amazing series of video games in recent years.  Already launched in Japan on the 3DS in November (and the PS3, Vita, and WiiU on the 12th of June, One Piece Unlimited World Red takes the Strawhat crew on an all-new story arc involving two brand new characters to the series, Red, and his follower Pato.

The game arrives today in Europe and Australasia, and with that, the kind folks at Namco Bandai have released a new trailer.

Alongside the new storyline there is also a “Battle Colosseum Mode” inspired by the recent Dressrosa story arc, where the characters can complete in a tournament to test their battle abilities in several battle types.

For super-fans of the series, there will be exclusive content coming, as the Straw Hat Edition offers 10 outfits (Luffy Strong World Adventure outfit and the Anniversary Pack with 9 outfits commemorating Japan’s 15th Anniversary of the One Piece anime.) and a unique quest where Ace & Luffy are re-united.  You can purchase this edition at Amazon and other leading retailers.

As an exclusive to the PS3, there will also be a Chopper Edition containing the items mentioned in the Straw Hat Edition, but also a key holder of Chopper, 10 stickers of the Straw Hat Crew members and game logo, a Wall Scroll of Chopper, lanyard of Chopper, an art book, and a “Takoyaki DLC Pack” containing 3 more costumes and 1 quest.  As of this writing this is only available at the UK retailer GAME, no word on whether or not this version will make it stateside. 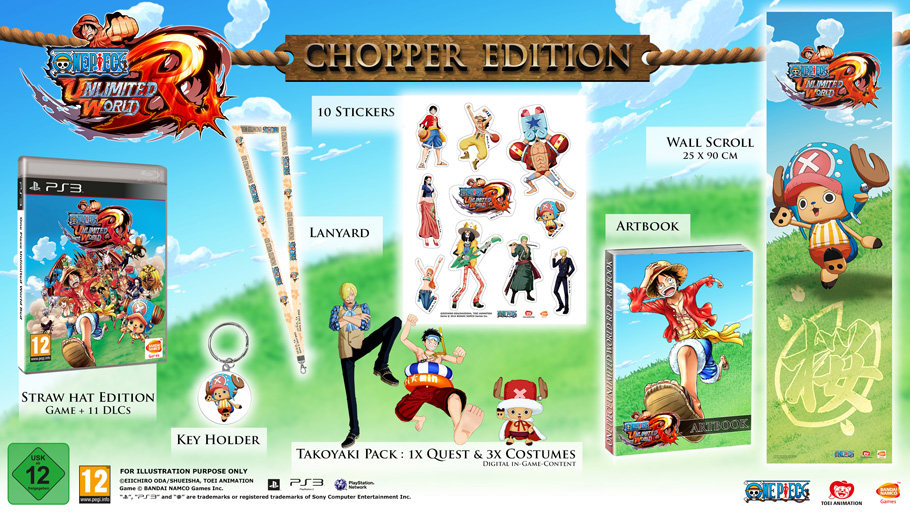 Those of us in the US will have to wait just a few more weeks, as the game is scheduled to arrive here on July 8th, on the PlayStation 3, PlayStation Vita, Nintendo 3DS, and Nintendo WiiU systems.