Playing is nice but sinking into a good book is wonderful too, and if that book goes into detail on the history of gaming then that’s even better.  There’s so much happening today, all of it moving so quickly, that it’s easy to neglect where it came from and the lessons that the past have for the future.  Raph Koster has been working in the field of online gaming for his entire career, starting in the days of MUDs and advancing to lead design on Ultima Online and creative director of Star Wars Galaxies.  Throughout his entire career he’s taken time to write essays and give speeches, all of which have been archived for later.  Later, as it turns out, is now, and that’s the book Postmortems Volume 1.

Postmortems is a collection of writing both old and new documenting the evolution of design in multiplayer gaming, from text adventure to cutting-edge tech.  The challenges didn’t just come from online gaming growing into a dominant force, but also from increased expectations and the shifting priorities of switching from dedicated fans to a more general audience.  The smaller tight-knit communities that developed around a text-based Multi User Dungeon are very different than the ones that grow up around a mass-market game like Star Wars Galaxies and the essays explore the challenges of working for each.  I’ve only just started reading, and despite being more an arcade-type gamer than MMORPG, have been enjoying its look into a major aspect of gaming history and the many personal stories that illustrate it.  This is the first of three volumes and the series is shaping up to be vital reading for anyone with an interest in knowing how games of any sort come about.

Postmortems V.1 is available now from Barnes & Noble in a Nook version (with Kindle on the way), while Amazon has a physical copy up for June 26 pre-order. 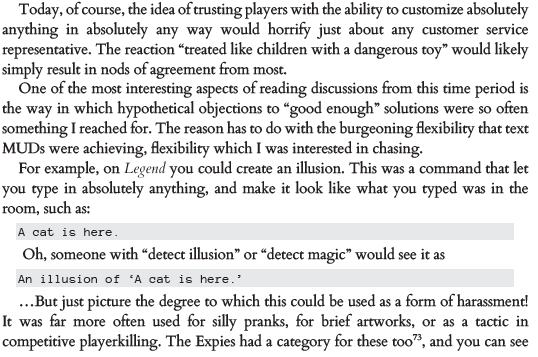