It’s a story as old as time, or at least as old as the SNES Harvest Moon.  Once there was a run-down place that had seen better times, but the past is gone and the present isn’t looking so great.  For Moonglow Bay it’s the entire town that’s just about at the end of its days, with the main industry of fishing completely shut down due to a fear of sea monsters.  The local government is just about bankrupt, with no money to pay for repair or even the upcoming centennial celebration, and what was once a cozy little town is littered with debris and boarded-up buildings.  That’s a lot to come back from, but a spirited young fisherperson is going to try to harvest the local seas again to show that there’s still hope and Moonglow Bay can live again.

And then everything goes terribly wrong, years pass by, and grief finally subsides enough that the now-middle-aged fisherperson can try again.  They’re going to revive the town with a combination of fishing and cooking, using the bounty of the surrounding ocean to set things right again, and this time it should go better.

Moonglow Bay is an absolutely lovely fishing-adventure set in a small mid-80s Canadian town.  Or at least mostly-Canadian, seeing as there are fantasy-fish swimming around out there and it seems highly likely the game wouldn’t promise sea monsters without actually delivering on them.  I’ve been playing Moonglow Bay over the weekend and loving my time with it, but so far the biggest thing I’ve seen is a whale.  I’ve been spending the time slowly getting to grips with how the town life and fishing management work together, running errands around Moonglow Bay and the various regions of its ocean, dragging in fish by rod and net and then cooking them up to sell. 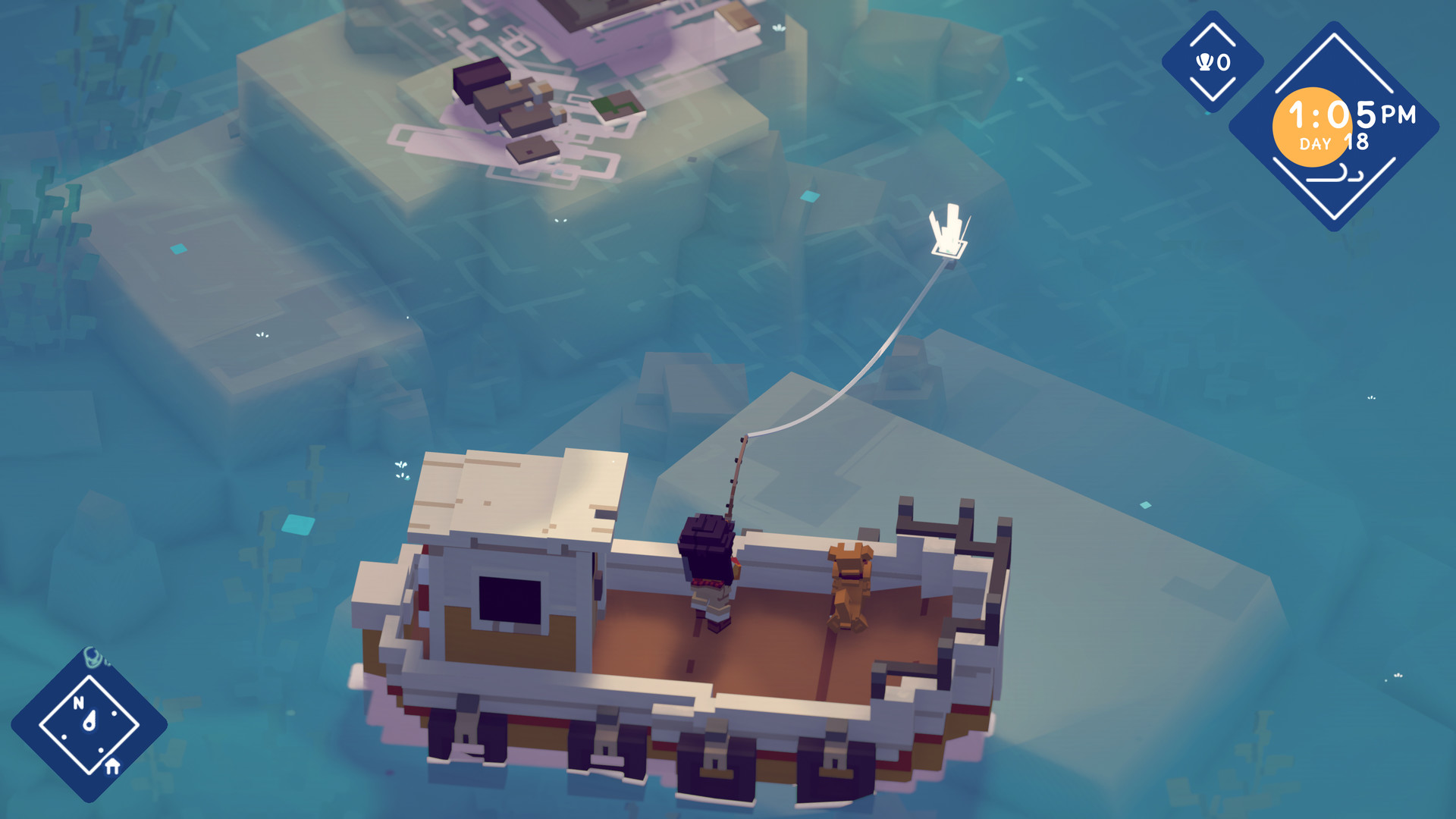 While initially fishing is only from on shore, the story quickly provides a beat-up old fishing boat to take to the waters.  Out on the ocean you can cast the rod anywhere, and the choice of lure, bait, and region help determine what kind of fish you pull up.  That’s great for the more specialized fish, but if you need a bunch to whip up a pile of food the net comes in handy for pulling in multiple common fish instead.  The net can only be used where the shadow of fish show on the ocean, but a good throw can pull in five or six at once, especially if the timing is right and you manage to snag a few from a shoal swimming by.  It’s honestly relaxing to be out on the ocean experimenting with lures to see what each region can offer, and while the clock ticks by at a minute per second your character can forgo sleep long enough that exhaustion isn’t an issue.

Back in town you’ve got a few choices with what to do with the haul.  A bulletin board in the town’s center has high-paying mini-quests, whether that be to bring someone a specific type of fish or a number of fish dinners, but you can always whip up batches of food and put them in the vending machine outside the house.  Initially you can cook between one and four of the same item at a time, with each step of the process (wash, chop, boil, bake, etc.) being its own little mini-game, but as the story progresses that number goes up.  It’s never a bad idea to hold on to a spare dish for the townspeople as well, because certain people have favorites and sharing food earns more of their stories.  Thankfully Moonglow Bay forgoes the guessing game and people tell you exactly what they like, so there’s no wastage in the process. 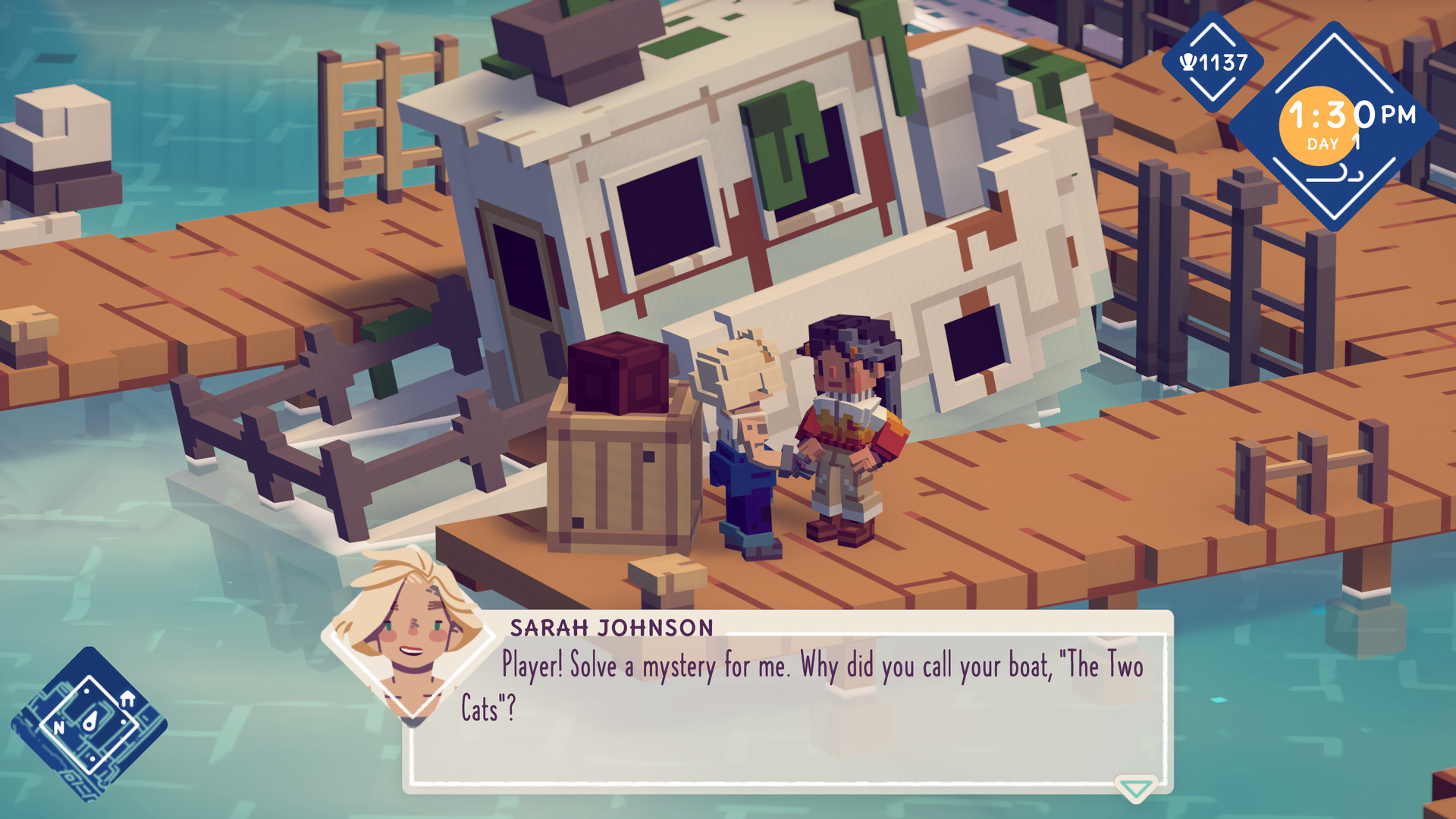 As much as I love Moonglow Bay (and to be clear, the game sunk its hooks into my heart almost instantly) I do wish it had released in an Early Access form for a couple of months.  There’s a lack of polish that makes it hard to fully recommend, whether that be getting caught on scenery, quest markers showing for inaccessible tasks, near-constant screen tearing, and a frequent lack of clarity on how to do things.  Saving the whale involved a mini-game that wasn’t hard at all once I realized what the icons were trying to tell me, but it took several failures before I figured out the quick-time event had a joystick direction indicator.  Similarly, the first time on the boat was a much longer trip than planned, and while it’s possible the map said where the home dock is I don’t recall seeing anything like a quest marker for it.  Knocking the boat into every dock, wharf, and beach until the anchor icon shows up isn’t the best way to find where it’s supposed to go.

There are two reasons this article is an extra-long news piece with extended commentary rather than review.  First up, I’m only on Chapter 2 of… a bunch?  No idea, and I’m enjoying the game too much to look ahead.  Second off, I’m hoping that playing it slow gives Moonglow Bay a chance to be patched into the game it should be rather than the janky mess it currently is.  What I can say for sure is that all the problems listed above aren’t putting me off playing the game at all, and instead I’m just working around them like any other gameplay element.  There’s fish to catch and a town to revive, and sinking into Moonglow Bay’s oceanic world feels incredibly comforting.  I’m hoping the game can get the polish it deserves but even if not, the story, town, and charactersy make it a wonderful place to visit and live for as long as it takes to see the town spring back to life.

Moonglow Bay released today with the standard launch trailer.  You can give it a watch below but, if you’re at all curious about the game and averse to gameplay spoilers, it’s worth jumping straight in discovering each new upgrade and gameplay element as its introduced while slowly sinking into its irresistable charm.