Late last month, we reported that an e-mail went out to select PlayStation MVPs inviting them to a secret event in New York City on Friday February 13 to be the first to witness a “new PlayStation initiative.” Taking place at Gotham Hall and attended by celebrities, this event seemed like a big deal and our minds were racing with possibilities for what Sony could announce.

Sony has revealed PlayStation HEROES which will allow players to tea up with their “heroes” to help raise money for charities by purchase digital items through the PlayStation HEROES App. The app can be downloaded from the PlayStation Store for free. Every month, a celebrity will be matched up with a gamer, beginning next month with Destiny and Shaun White. The digital items — dynamic themes — serve as entries to win a play-date with Shaun White, all benefiting the Make-A-Wish foundation. 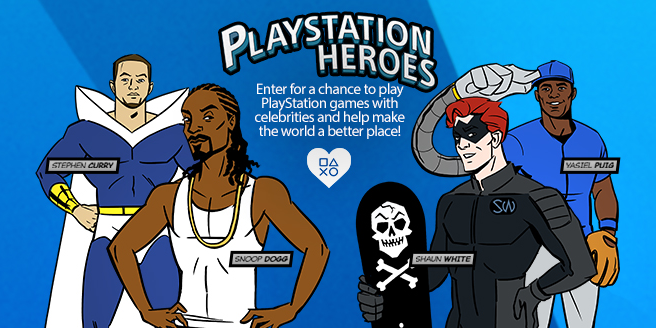 This explains why the event was talked up to be attended by celebrities — not because a groundbreaking announcement was set to take place, but because this new initiative revolves around celebrities like Stephen Curry, Snoop Dogg, Yasiel Puig and the aforementioned Shaun White.

Given that this all turned out to be was a charity event, however, it’s a bit odd that Sony was so cryptic about it. But then again, considering that the event itself was apparently never intended to leak out to the public, it seems that they were simply trying to promote a party more-so than get people hyped.