Lollipop Chainsaw May Be Coming Back From The Dead

New Sly Cooper and Infamous Games Rumored To Be In Development

We know you’re all enjoying your brand new Pokémon adventures, but stop, look and listen! There are three names that can be found in the Global Trade System that have not been known until now. Diancie, Hoopa and Volcanion have somehow been spotted on the GTS. With the worldwide release, no official guide and all leaks being shut down, we had no idea there were still new Pokémon to catch. It’s likely one or all three could be one of those cute, little legendary Pokémon like Mew and Jirachi. There’s been no evidence of one of those for this generation but there has to be one eventually.

According to some sources, the names have already been trademarked in Japan. And apparently the Japanese names have been known since before the game’s release. There were multiple sightings of these names by players in the GTS, but now it seems to have been fixed. Who knows how long we’ll have to wait to confirm them. Here is evidence of one player trying to trade away their Yveltal for Volcanion. 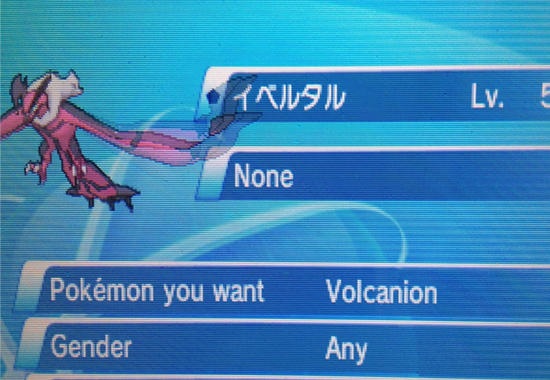