Sony announced on Tuesday that it has launched a new app called ‘PlayStation Messages,’ allowing PlayStation users to contact “friends in a quicker and easier way than ever before.” 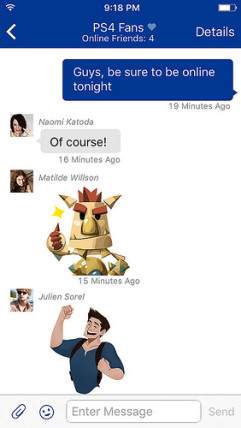 As its name suggests, the main feature of PlayStation Messages is straightforward: users can scroll through their PlayStation friends list to find those who are online and the ability to send photos, PlayStation-themed stickers, text and voice messages to an individual or those in a group chat.

Aside from making the messaging service a separate entity from the PlayStation App — similar to Facebook and its Messenger app — Sony’s other update lets PlayStation App users follow verified accounts and keep an eye on what their most recent activities have been.

PlayStation App, however, will continue to utilize its main purpose of managing different features on PlayStation 4 from a handheld device, which includes the ability to remote control your PS4, serving as a second screen for select titles and also overseeing downloads from the PlayStation Store.

PlayStation Messages is now available as a download for iOS and Android devices.

In other PlayStation-related news, Sony Computer Entertainment revealed last month that the PS4 had surpassed 30.2 million units sold worldwide, as well as an announcement that a new in-ear headset would be available in early December for the console.