Earlier today, we reported that Sunset Overdrive, Insomniac’s absolutely ridiculous third-person shooter, has officially gone gold. Reports have now surfaced that gamers no longer have to wait to download the colorful Xbox One exclusive, as it takes advantage of the Xbox One’s new preloading feature. Here’s what Sunset Overdrive‘s Pre-order Edition and Day One Deluxe Edition look like on the Xbox One storefront: 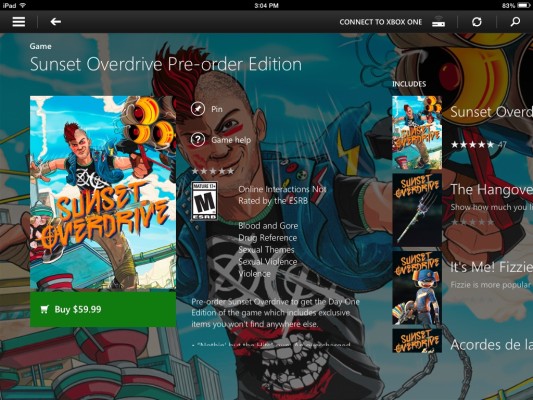 A number of exclusive items are available for players who choose to preorder Sunset Overdrive. Players will have access to a number of costumes, including a special Fizzie costume that has the making to be nothing short of epic. In addition to Fizzie, players will be able to wear the Bomber Ninja, Goth Lolita, Disco Champion, Never Get Cold, Road Queen, and Red Monkey Lightning outfits. An experience booster can be added onto players as an amp, as well as a Smite amplification that will strike enemies down in a cloud of smoke. A number of extra weapons and traps will also be available to those who preorder either of the prerelease versions of Sunset Overdrive.