It seems the LCS has finally realized that Best of 1s, or BO1s, aren’t the most competitive thing.

So in an effort to create better teams and a more competitive environment the LCS is instituting BO3s and BO2s in the NA LCS and EU LCS, respectively.

Why are they doing two different formats? Well apparently they don’t know which they like more so they’re trying them both out. EU will have BO2 because Europe is a country where sports ending in ties or draws is a normal occurrence and the LCS feels like it would be more there. NA has BO3 purely because of opposite, but once they see which works better that’l all change.

Now here’s where things get a little wonky. In a format that the LPL and LCK make look easy the LCS has gone and made things look a lot more complicated. EU teams will still play just Thursday and Friday, but matches will run concurrently. Meaning you’ll have two matches on all the time except for during the third match. The NA LCS will have matches spanning across Friday, Saturday, and Sunday with Friday just featuring two BO3s and the other days like EU’s schedule.

Lastly, there will be two stages so two matches can go on at once, meaning they’ll be broadcasting games at the same time but on different stations. They’re still planning how all of this is going to take place so there may be a few changes by the time it all rolls around, but you can expect some more personalities to get used to on the LCS desks.

Below are pictures of the scheduling changes. What do you think? 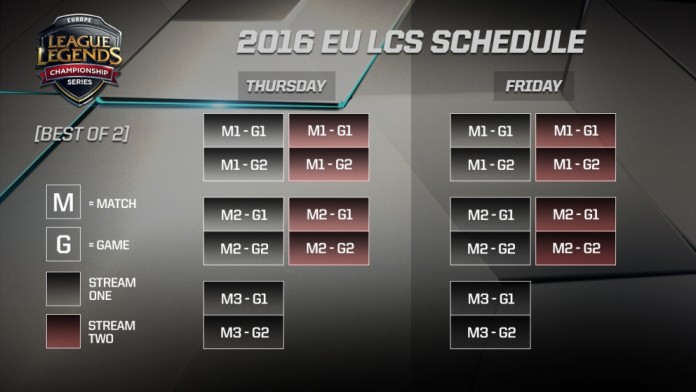 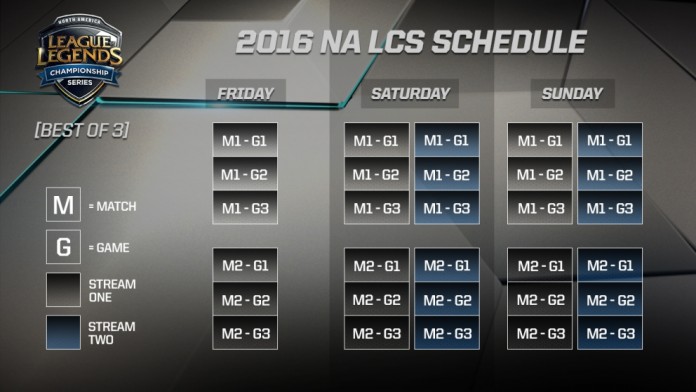