Quite the brouhaha ensued after a rumor broke out yesterday that Thief would not run at 1080p on the Xbox One. IT seemed that this would not be another case of next-gen resolution controversy when someone at Eidos has confirmed that Thief would indeed run at 1080p on the Xbox One (and PS4). Phillipe Cadieux, QA Mastering Tech at Eidos, took to Twitter to debunk the rumor, stating that “both versions of the game are running at 1080p.” 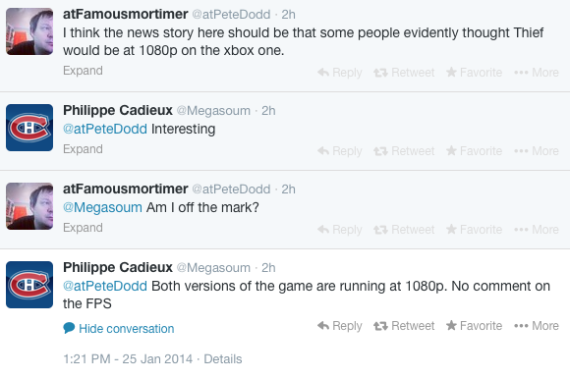 Unfortunately, however, just minutes later he clarified that he tweeted the above by mistake and misread the original question, assuming it was for Tomb Raider. The tweet has since been deleted. While normally something like might seem like a cover-up, we do think it’s genuine as not only can mistakes easily be made when not in PR form on Twitter, but also because he mentioned the FPS of the game, something people have not yet been questioning about Thief.

Whatever the outcome, it looks like we’re in store for more drama.