With Halloween only a day behind us, Nintendo has jumped quickly at the chance to help assuage the guilt of the many parents who likely “checked the quality” of their children’s candy a bit too much. Released today on Nintendo’s e-shop is the full version of Wii Fit U in “demo” form. The demo is fully compatible with the Wii Balance board of Wii Fit fame giving people the perfect chance to pull out their Wii Balance board that has been collecting dust underneath the couch or in the closet that it has been stored in. 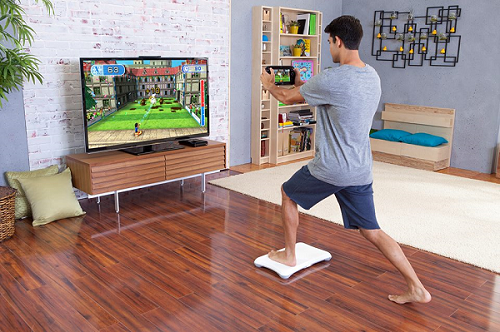 That’s not all though as Nintendo has also made available the “Fit Meter,” which seems to be a somewhat beefed up pedometer (that Pokemon Heart Gold and Soul Silver Players will recognize) that can track intensity of movement and altitude changes which means it can more accurately track calories burned. The Fit Meter also syncs up to the game allowing players to track their steps throughout the day and store it in game which also seems to give the player some sort of in game currency judging from the demo video.  The most interesting aspect of the Fit Meter, however, is the fact that if you purchase on and already posses a Wii Balance board Wii Fit U is yours for free. With the Fit Meter receiving an MSRP of $19.99 that’s not too bad of a deal, giving the perfect low price point for those that already own the balance board to upgrade to the latest version.

So have no fear Nintendo is here to help counter balance any seasonal over indulgences you might make by getting you off your couch yet again and into fitness games. And now with the Fit Meter it becomes a lot easier to track all those calories you burn, or don’t burn, at the office or over the course of the day. Be sure to check out their Wii Fit U page for more details. Even hardcore gamers need to get up and move around every now and then.