While the titles are extremely niche, there is no denying the appeal of the Senran Kagura series. The uninitiated might scoff at the overt sexualization of the characters, the games are so much more than that. The characters are likable, the action is satisfying, and the jokes, while cheesy, come at a rapid clip. The thing is, the first game, Senran Kagura Burst, wasn’t that great. Xseed, with the help of Honey Parade Games, has been working to resolve this with the upcoming Senran Kagura Burst Re:Newal. Retelling the story that sets up the rest of the franchise, this title should bring it in line with the gameplay of the rest of the series, minus Peach Beach Splash, of course.

Today, XSeed dropped the details on the physical editions that will launch this fall. The first is the “Tailor-Made” Edition, which, for fifty dollars, includes:

While the last two don’t capture the attention, extra in game content and a two disc soundtrack of some pretty decent music certainly does, especially for the asking price. There is also an eighty dollar edition, called the At-The-Seams Edition, which comes with all of that stuff, as well as a set of six rubber straps (yes, “straps”) with a display stand. So… that’s weird. Either edition should turn out to be pretty cool, though. 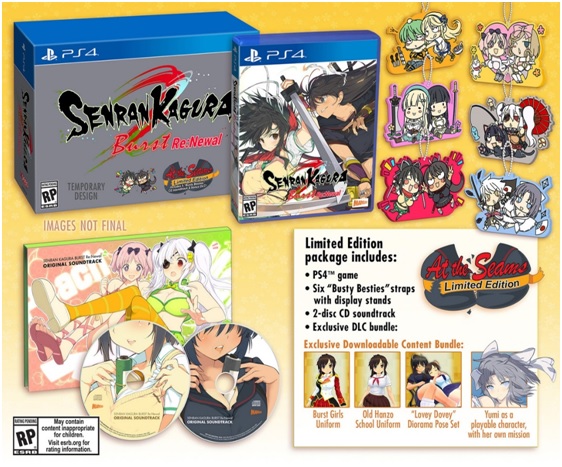