Bugs are weird, creepy and fascinating, like an alien lifeform except for the part where they easily outnumber mammals, fish and lizards so technically they’re the normal ones.  The first instinct on seeing a particularly strange insect is to smush it, and even the familiar ones get that reaction.  Just because I’m familiar with ticks doesn’t mean I don’t reach for the tick-squishing pliers the second I find one on my leg.  UltraBugs is a shooter about blasting insects into gooey green blobs, but the problem is that every one you kill just makes survival that much harder.  That first bug on the screen is happy to sit there unmoving, minding its own business, and blasting it starts a chain reaction that will end in your death.

UltraBugs is a game about getting yourself into trouble.  If you want to live forever all you need to do is nothing, but seeing as you’ve got heavily-armed spaceship, the journey of peace isn’t a particularly interesting option.  The green goo that’s the remains of the first bug spawns more bugs, but unlike their predecessor these are likely to start shooting back.  The more you shoot the more bugs there are to kill, eventually filling every nook and cranny of the screen with an insect horde.  One of the focuses in UltraBugs is reversing the usual cause/effect cycle, where the player responds to the action on screen, and instead have the action respond to the player.  Even if you don’t realize it at first everything you respond to is directly caused by your earlier actions. 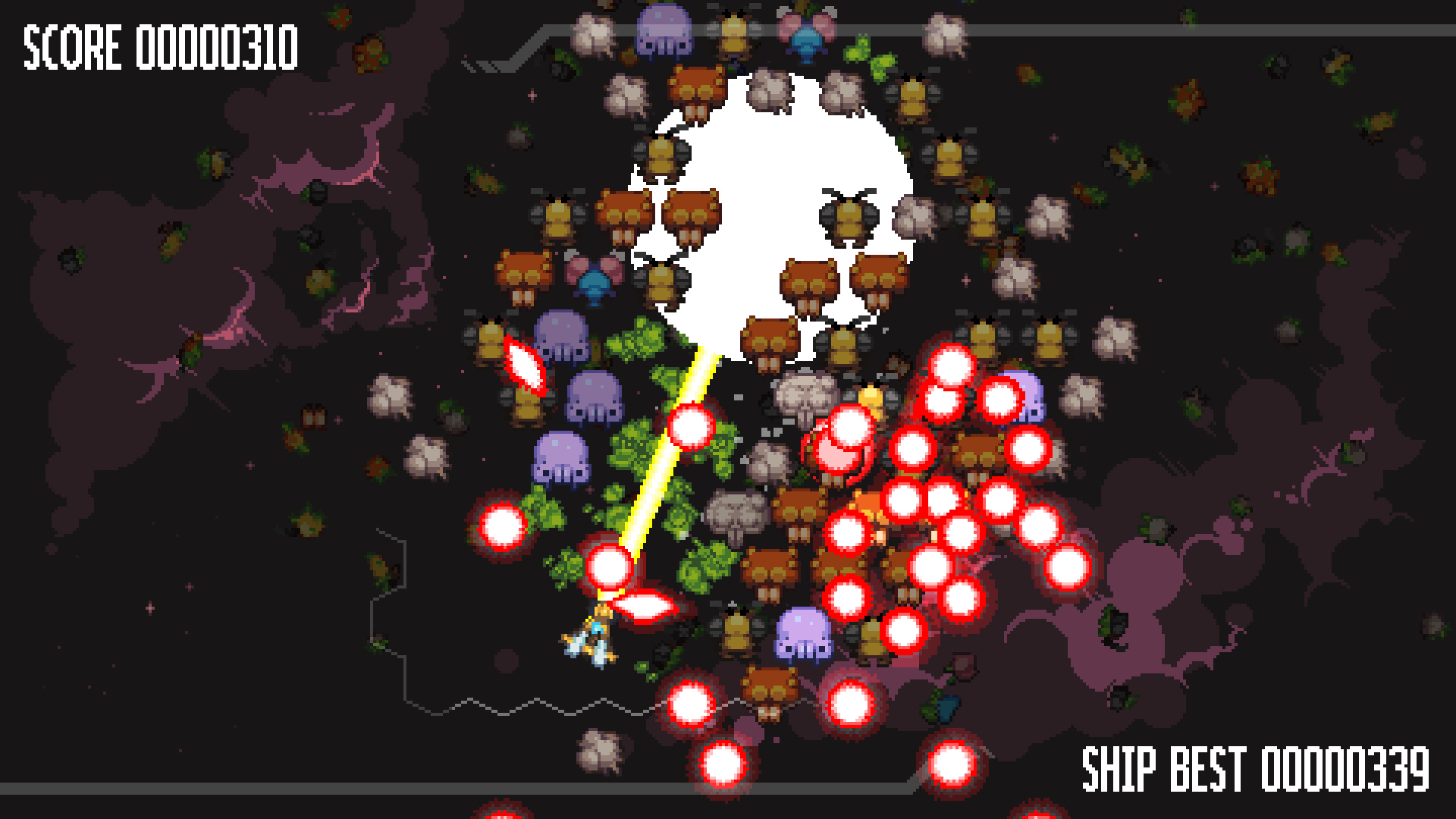 As the action heats up you’ve got a few things working in your favor.  Despite how they look the bugs are harmless to fly over, with the only real danger coming from their bullets, but that’s more than problematic enough and only gets worse when the giant boss-bugs start spawning.  The standard bugs go down in single hit but the large ones are significantly tougher, and when you’ve got two or three of them on screen at once throwing out multiple patterns of firepower it doesn’t take long for a run to come to an end.  There are tactics to handle this, such as destroying the purple bomb-bugs so that the blast cancels any bullets caught in its range, but even with a little help from the field of insects, a single run doesn’t tend to last more than a minute or two.  In my hands-on time at PAX East I was happy to clear 800 points and somewhat in awe of the posted high scores over 1,000.

If this doesn’t sound like quite the epic scope of Vlambeer’s last game, Nuclear Throne, there’s a reason for this.  Vlambeer made its name doing quick arcade games such as Luftrausers and Super Crate Box, and after the multi-year development cycle of Nuclear Thrown, it was time to get back to where the studio’s heart lies.  UltraBugs will be the first of as many small but intense arcade-style games as Vlambeer can manage to produce, and based on the developer’s record it seems the only defining theme will be incredible playability across a library of unique titles.