Do you know what a good sign of an outstanding game at an event like PAX East is? It’s when you become so addicted to a game that you quickly lose track of time, sucked into just how fun things are getting that you don’t realize that you’re actually late for your next appointment. So on that note, I’d like to congratulate Bloodroots as easily being one of the best games at PAX East, along with Canadian develops Paper Cult Games, and apologize to the game that I was booked to play right after Bloodroots.

Now, comparisons to Hotline Miami are inevitable. And unsurprisingly, Hotline Miami is one of Bloodroots’ influences when it comes to gameplay and the general flow of it. The fast-paced action that rewards quick reflexes combined with protagonist Mr. Wolf only being able to take one hit easily brings Dennaton’s classic to mind, but in the best ways possible. Having to quickly adapt to new threats and make due with whatever loose weapons you can find is a necessity, for one. 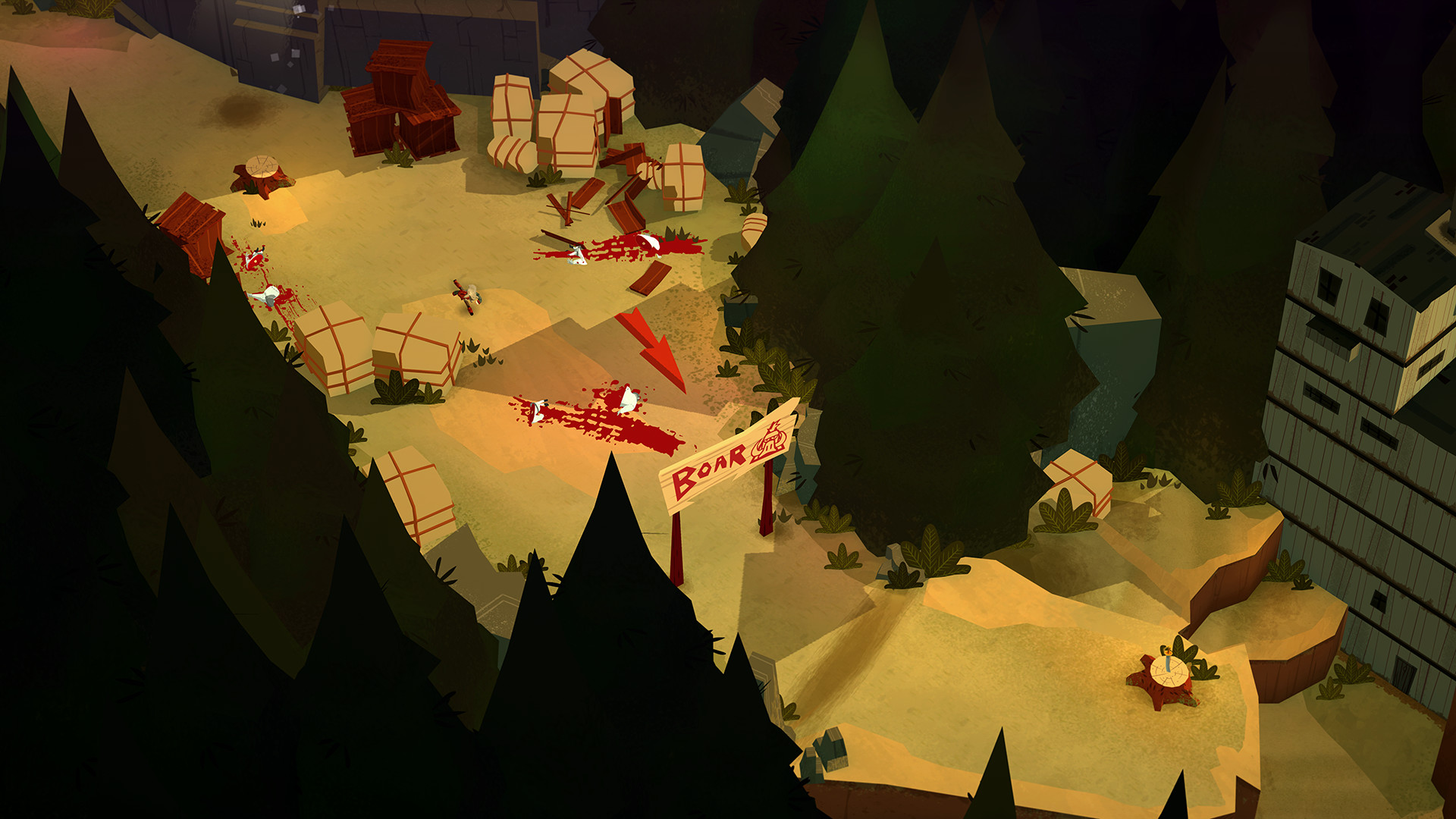 The big difference with Bloodroots, though, is that your loose weapons aren’t limited to mere guns and bats. No, instead virtually EVERYTHING is a weapon here. If you can pick it up, you can kill a man with it. Sure, you can easily just grab an axe or a sword and down a guy in one swipe, but what about shoving a fish over someone’s head and making them suffocate? Or bludgeoning someone to death with a head of lettuce? Or chucking a bale of hay at them with lethal force? Those are all valid options and all are equally fun. So far, Paper Cult has one hundred and fifty possible weapons in the game, and they still aren’t done yet.

The more interesting parts, though, come with weapons that allow you to move in different ways. You can jump on carts that lunge forward in a straight like, wiping out anything beneath them. Or jump on a barrel instead, allowing you to control it and moving it around, again steamrolling over enemies in your path. Or grab a ladder, twirl it around like a helicopter, then fly over to an enemy and smash it over their head.

Aside from just being fun to ride around with and controlling like a dream (like with the regular weapons), movement like this is actually necessary for getting across obstacles like gaps and spikes. In fact, one area in the demo actually required a bit of thinking, being littered with spikes and requiring players to manage the various barrels and carts littered around in order to find ways to cross and defeat all enemies in the process in order to advance. It’s a nifty bit of variety that doesn’t take away from the core action, even enhancing it a bit. 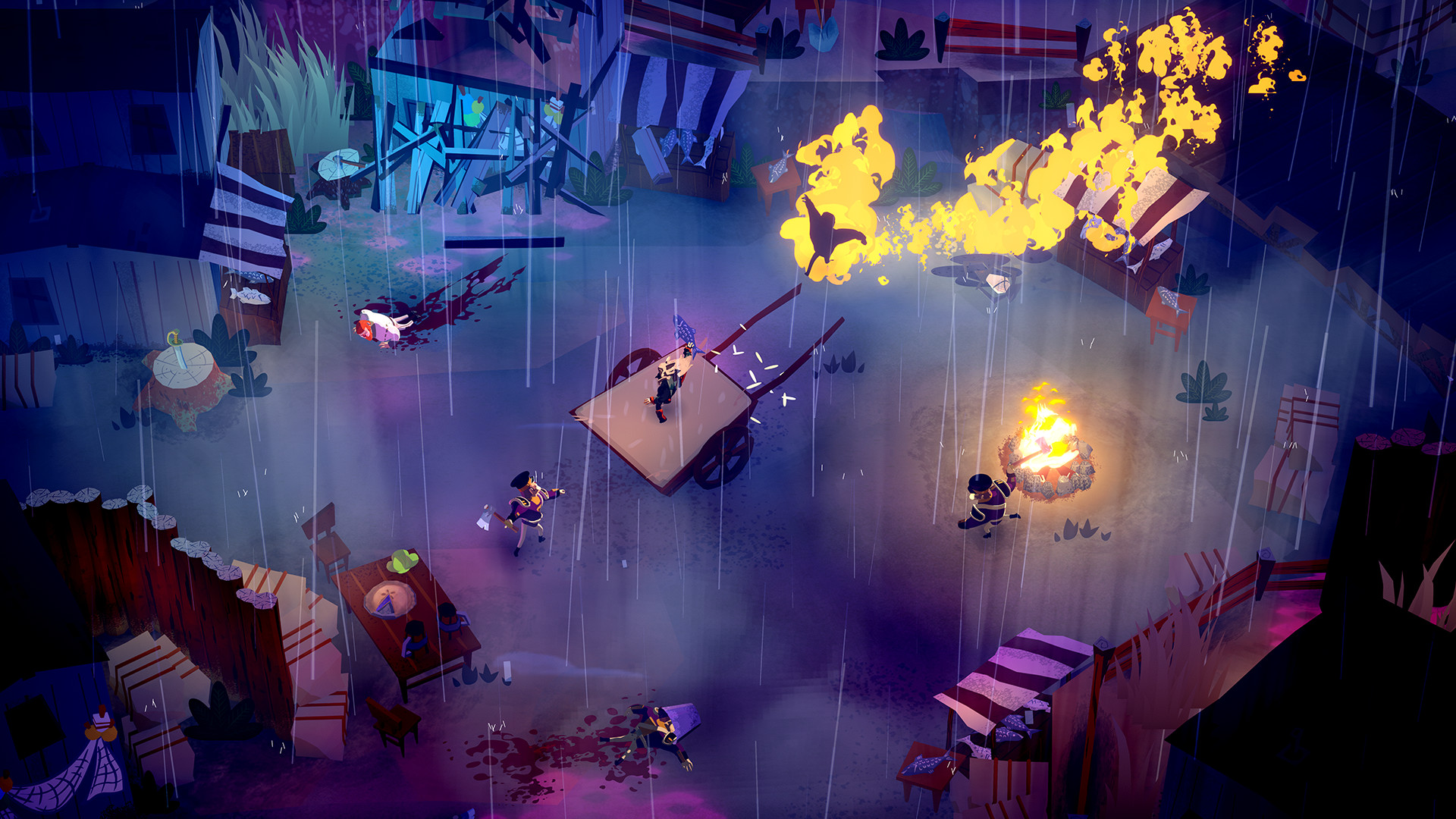 What makes combat and travel in Bloodroots interesting, however, is that each item has limited uses, only able to kill a certain amount of enemies. This means you need to pay sharp attention and switch to the nearest weapon ASAP. In a way, one could say this is reminiscent of the Dead Rising games, except the joke weapons are equally lethal this time around. But a bigger influence on Bloodroots comes from another source that’s both deadly and comical: Jackie Chan.

No, seriously. Discussing things with one of the developers, I learned that Jackie Chan and his films were a major influence on Bloodroots. They had wanted to replicate the types of movements and stunts he was capable of pulling off. And if you’ve seen any of Jackie Chan’s films, the influence actually becomes quite clear. Bits like rolling on a barrel, twirling props like ladders, the scrambles for improvised weaponry, the fluidity of the attacks and more all feel like the exact staples of a Jackie Chan fight scene.

Another of the game’s influences, and one that’s been a bit more noticed by people, is the animated series Samurai Jack. Paper Cult were also fans of the Western era and the industries within, but also wanted to incorporate more fantastical elements like lasers and hovertrains, drawing inspiration from the cartoon. This leads to the prominent Weird West setting, as well as its distinctive, cartoonish art style that captures the mayhem perfectly, suiting both the more outlandish bits and the more intense parts at the same time. This would also explain why thirst boss, Mr. Boar, was attacking me via a giant flying machine. 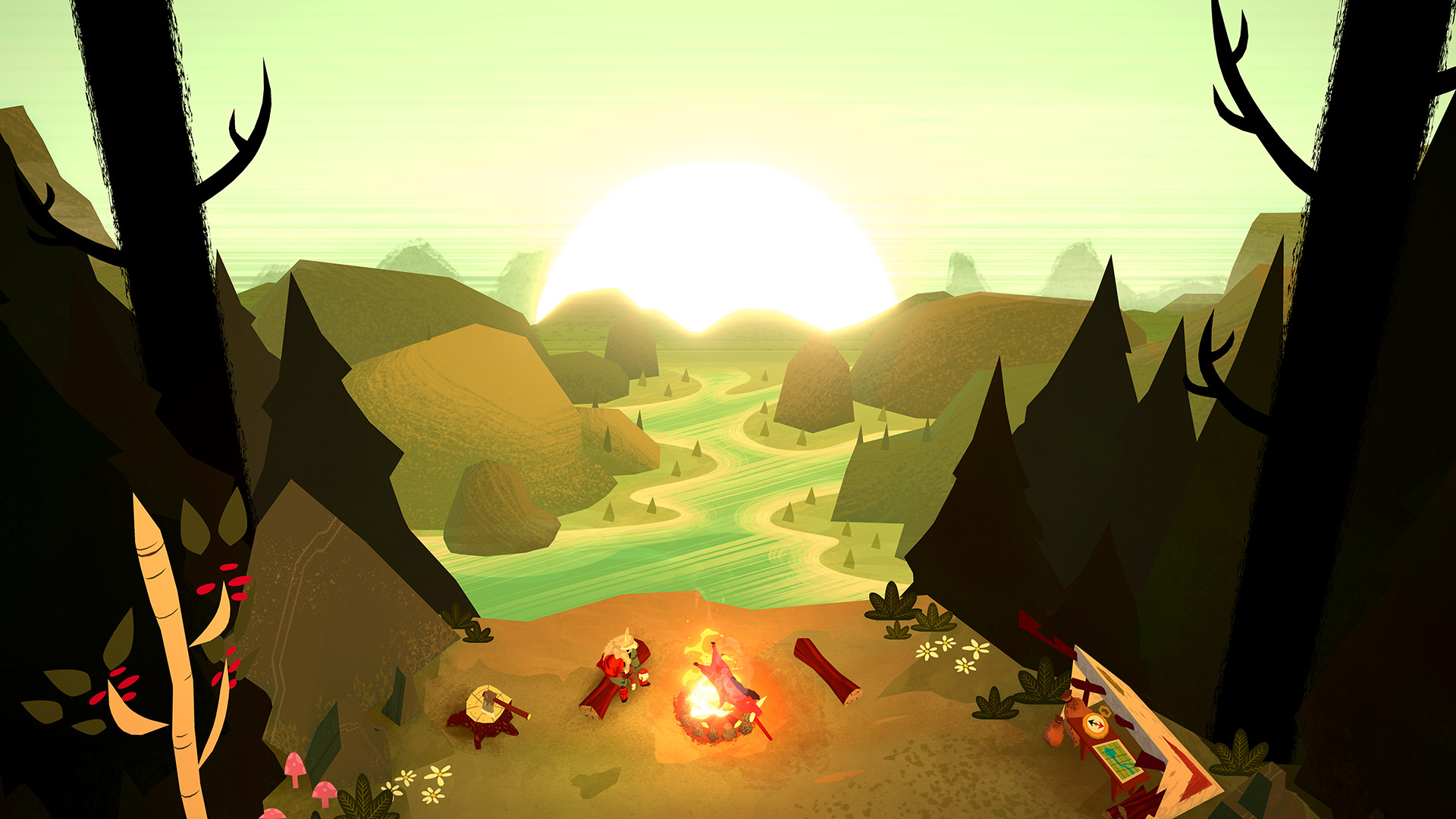 Said battle was a nice and intense auto-scroller, one where precision is the key to success. Mr. Boar also makes up part of the colorful cast of enemies driving this game’s plot, of course. After running through a ruined city on fire and coming near a snowy graveyard, Mr. Wolf’s former associates decide to kill him right then and there. Mr. Wolf somehow survives, though, and now it’s time to take them all out. How exactly Wolf came back to life, what his relationship with Mr. Boar and others was, and exactly what awful deeds were performed by them still remains a mystery, but it suggests we’ll have an interesting plot to get through as well.

So far, Bloodroots is shaping up to potentially become one of this year’s best action games. Drawing inspiration for gameplay, combat and style from all the right places, it has created this unique world filled with fast-paced action and impressive visuals, one where you can blitz through enemies at lightning speeds yet still have the time to experiment with a variety of weaponry. It is not a title to be miss out on, so keep an eye out for Bloodroots, which is currently set to hit PC, Switch and PS4 later this year.