One of the fun things about VR is the feeling of presence, even when doing something as abstract as swiping, shooting or punching musical beats.  It’s great fun, of course, but it lacks one specific details that real life provides, and that’s tactile feedback.  You will never feel slight drag as a lightsaber splits a note in half, which is probably for the best seeing as you can easily cut few a few thousand in a good round of gameplay.  Liteboxer, on the other hand, is an exercise machine that just happens to also be a music game.

Like most music games the object is to hit notes to the beat.  Unlike most music games, this is incredibly literal.  While there will be a phone app where you can tap the music away, the full game is played using a large stand that holds what I’ll call a display (for want of a better word) designed to literally be punched by the player.  The bit you punch looks a little like a championship belt with six circles arranged in a hexagon formation.  Each circle is connected to a line, and behind the soft padding covering the display are a series of LEDs.  The light goes down the line towards the circle, which you punch as it lights up on the beat.  Simple, but also deeply satisfying.  Punch the circle on time and the light changes green, but if you’re off the beat it turns red.  Either way you got to punch something and there are more beats coming quick.  I had a great time with the one song I played through and could easily see playing Liteboxer either as part of an exercise routine or just for the fun of it. 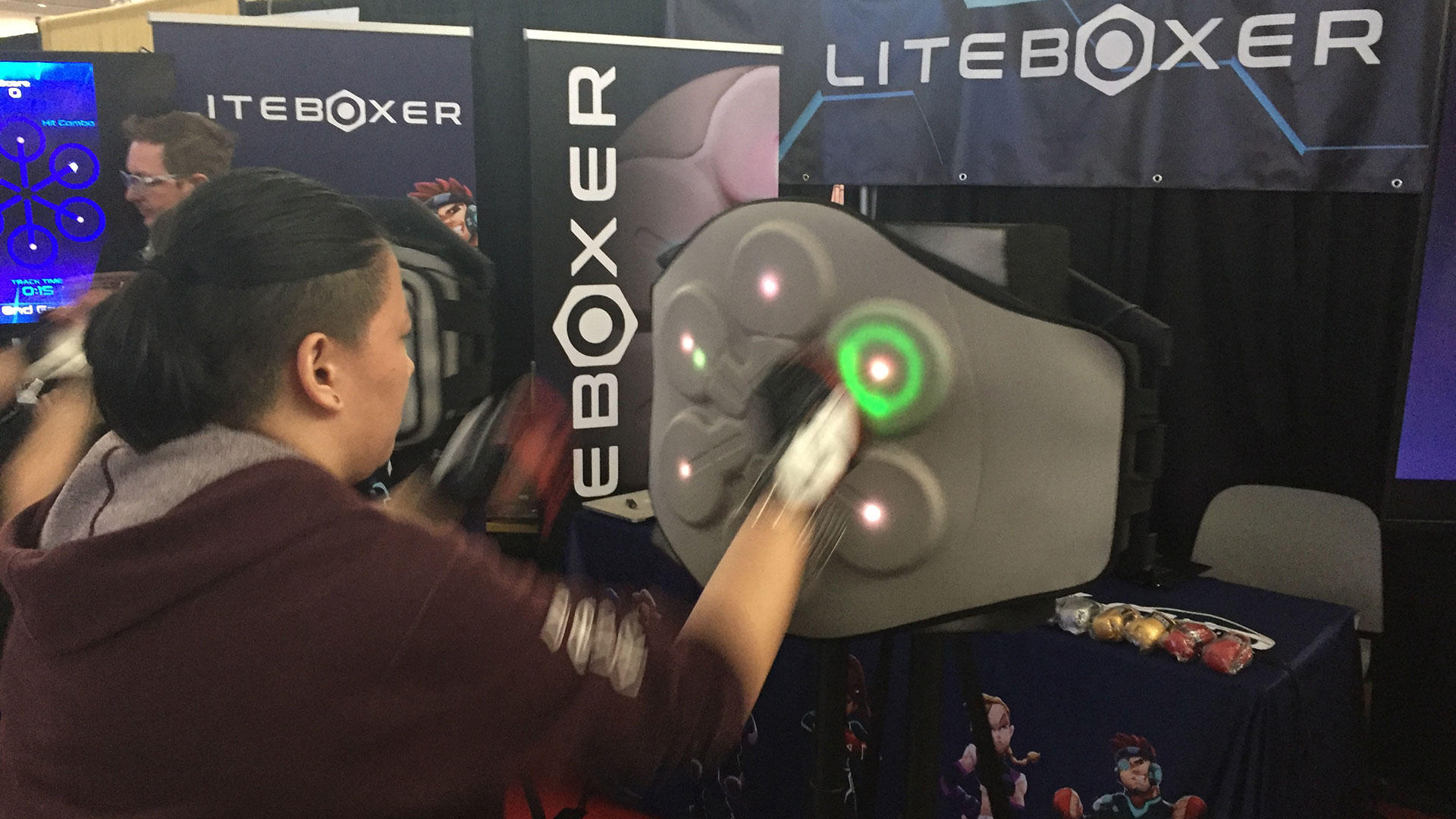 At this point I need to admit that this article is probably a little too early.  Questions such as “How many game modes?”, “How many songs?”, “Can I pre-program exercise routines?” or even “Does it come with boxing gloves like those provided for the demo at PAX East?” are just sitting there unanswered, and I didn’t hear back from a couple of contact attempts.  I can say that I wasn’t the only one who had a good time testing Liteboxer out, with the booth getting constant attention over the course of the show.  The developer was confident enough in the durability of the prototype units that he had no problem letting an endless swarm of people hit them eight hours a day for four days straight and the expectation is the final versions will be even tougher.  While it will take a bit of floor space to set up, the release version will come with the stand, and there’s a target price in mind that hasn’t been finalized yet so I’ll just say “under $300” with the hope it will be a nice surprise by how far under $300 it turns out to be.  At the moment the Liteboxer web site is a placeholder and the Twitter feed has been silent since PAX, but with any luck it’s due to the work being done getting ready for release later this year.  Liteboxer is a great idea that hopefully won’t take too much work to reach its potential, but for now we’re all going to have to wait a bit longer for more info to filter through.