When preparing for PAX East this year, I was a bit puzzled by my invite for the Devolver Digital booth. Okay, Devolver is always a wild card, true, but after making some initial appointments, a follow-up e-mail still encouraged me to book an appointment for Fall Guys, as it is apparently set to be Devolver’s biggest game of 2020. To which my initial reaction was “…Really?” I mean, don’t get me wrong, Fall Guys is shaping up to be insanely fun, as I can attest to from my previous experience playing it at E3 last year. And I understand that as an online multiplayer game, it’s going to be receiving many updates and new content well after launch. But compared to last year during Devolver’s tenth anniversary when they gave us Katana Zero, Ape Out, My Fried Pedro, and more, it just felt like a bit of an odd pick.

It actually took another game from the show, Disc Room, however, to cause me to realize just why much attention would be focused on Fall Guys. I won’t go into much detail, as our own James Cunningham should be prepping a more comprehensive look at Disc Room, but at it’s core, the concept is simple. It’s a top-down dungeon crawler from the creators of Minit where each room has you running around and dodging several spinning circular blades. You progress by objective such as surviving to a certain amount of time in each room, and as you progress, more types of blades are added. It’s a simple game to play with minimalist graphics that basically only requires a single analog stick and yet it’s insanely fun, as evidenced by the accolades adorning its booth by the end of the event. 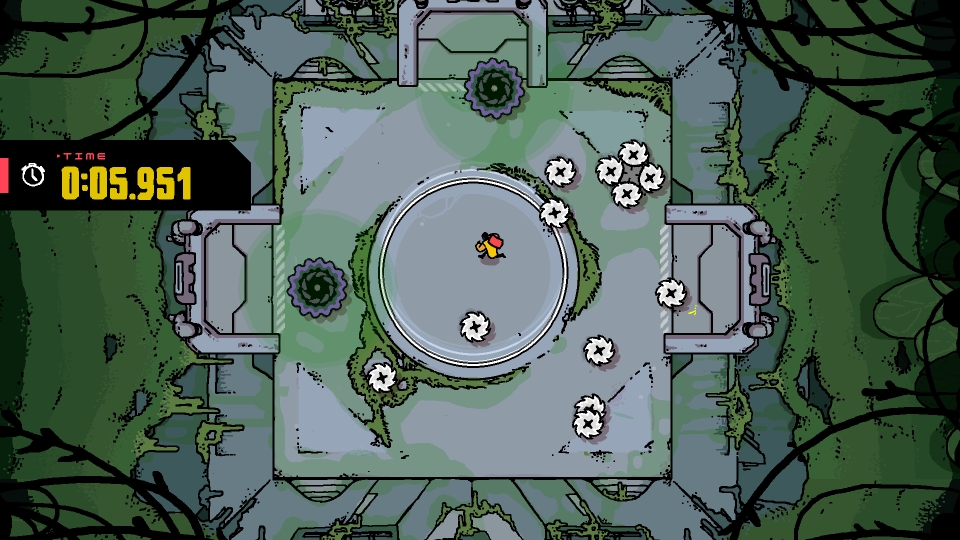 A lot of what makes Disc Room enjoyable, you see, is the tested and true principle of “genius in simplicity.” And a lot of that can be found in Fall Guys as well. One hundred players are thrown into a series of small challenges inspired by the likes of Japanese game shows. After every challenge, a certain amount of players move on to the next one, with the rest being eliminated. So far, several of said challenges basically involve just either being able to move around, jump and grab something. Easy-peasy to work with, and still damn fun.

Admittedly, there haven’t been that many major changes to Fall Guys since our last preview, though. There was a showcase of character customization this time around, showing off a few colors, patterns, and parts of costumes that you can deck your little guy out in, which was amusing. There was also a new game included, Egg Steal, where players were divided into three teams with the goal of grabbing eggs and bringing them to your team’s pit, with every player on the team in last place being eliminated at the end. It’s charming and easy-to-learn stuff again, nice and fast-paced, and encourages various strategies like whether or not to focus on stealing eggs from a rival team’s pit as well or having two teams join forces to knock the third out.

It is indeed some fun stuff…to look at, anyway. Unfortunately, I kept getting eliminated right before I could reach that particular round, as we had other human players this time. Stupid eighteen year-old that knocked me out…but yes, again, with a visual style, core concept, and gameplay you can easily jump into that appeals to all ages, alongside the promise of regular updates, one can easily see now how Fall Guys is being set up as Devolver’s big game for 2020, looking simple on the surface yet heavily entertaining and challenging underneath its candy coating. 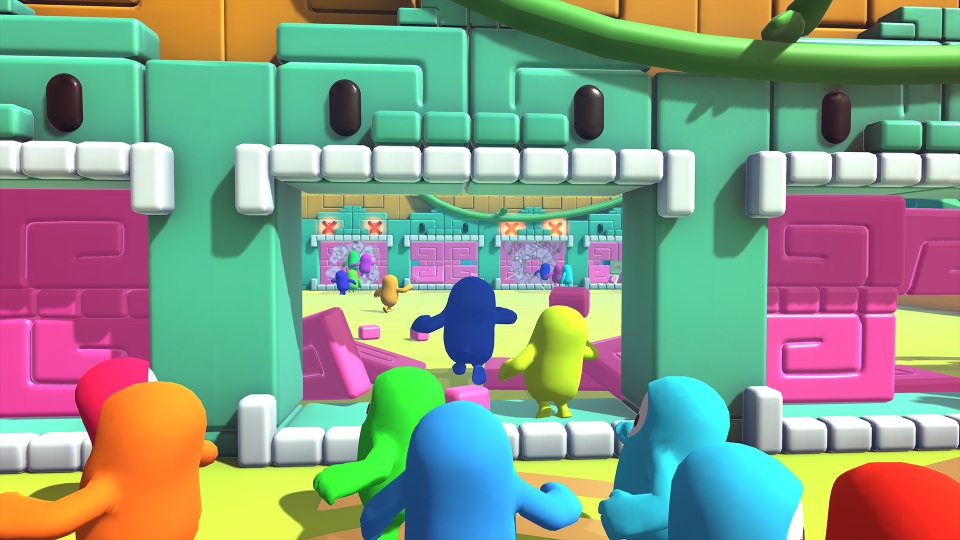 But the final game I tried out that emphasizes how Devolver Digital is finding success in the simplest of concepts would be Sludge Life, the new game from developers Terri Vellman and Doseone (who are also working on Disc Room, making it a busy year for them). They described the game as a walking simulator set in the unique world of-HEY, GET YOUR ASS BACK HERE. Yes, I know I said “walking simulator,” which for several gamers carries a massive stigma with it, but if games like What Remains of Edith Finch and Firewatch can be labeled as walking simulators yet still turn out amazing, there’s no reason to not expect similar results here. Besides, Doseone made it clear that this is “a walking simulator, Devolver-style. Terri and Dose-style.” Which as you can see from the game’s trailer below, means quite a twisted and unique take on the genre.

Actually, the inspiration for Sludge Life came directly from the duo’s previous game for Devolver, High Hell. Apparently, Terri pondered what would happen if they took High Hell and removed all of the guns. As in, what if you still had all of the fast-paced movement, jumping, climbing, parkour and more, but instead the focus was now purely on exploration and messing around. And thus we have the game’s world, an island in a “post-pollution” universe where a mega-corporation called Glug basically owns and runs everything. Unfortunately, once their mascot Ciggy dies and they refuse to clean up his body, it becomes a human rights issue and everyone goes on strike…leaving the jobless youth like the character you play as being given a playground for graffiti, vandalism and general mischief. 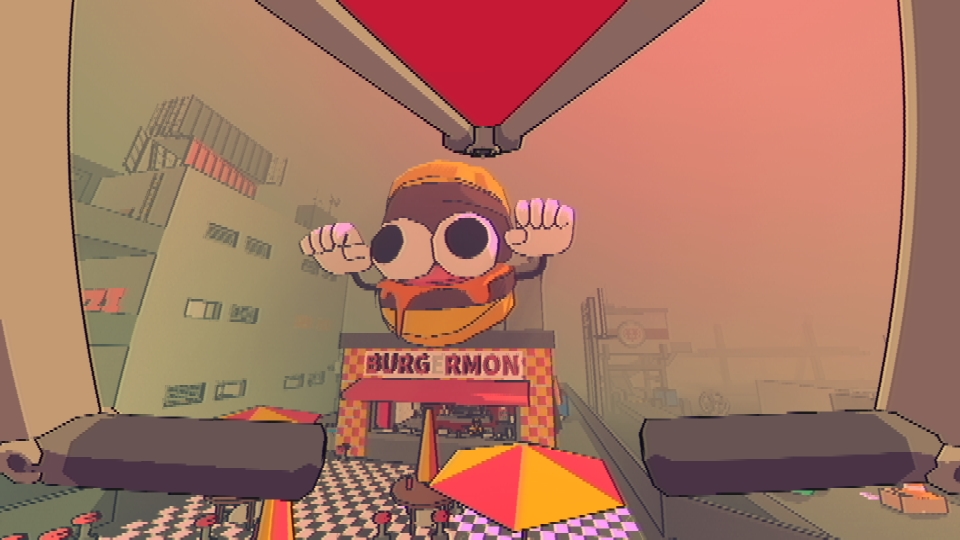 So a lot of the gameplay does revolve around tagging various areas, with the challenge lying in how you get to certain spots, dealing with rival taggers along the way. Comparison to the Jet Set Radio games is arguably inevitable (and okay, part of it is really just my own wish to have Devolver publish a JSR game, because I know they’re listening, dammit), but the inspiration comes more from “the gateway drug of our own aesthetic,” according to Doseone. The carefree days of youth with a lot of running around, climbing and street art. And the unique aesthetics similar to High Hell are eye-catching here, with simple yet grimy areas punctuated by bits of craziness and color, some supplied by yourself. What we have is basically an industrial ghetto, with a bigger emphasis on urban aspects, one practically begging for rebellion.

Said rebellion revolves around one simple concept: curiosity (well, that and vandalism). Sludge Life is an open-world game and it basically encourages you to climb over every inch of the game’s world, discovering oddities in the process such as showering drunks, one-eyed workers, bizarre roommates in hiding, a compass you can use that’s literally a pair of severed eyes and even a cat with two buttholes. And in the end, there’s even one massive puzzle to solve at Glug’s headquarters. Getting there requires gathering all of the equipment necessary that allows you to traverse certain areas, with the demo mainly focusing on a glider that allows you to zip across the air. Getting around all controls nice and smoothly and the game’s wicked and surreal sense of humor should hopefully provide further incentives for players to try and find everything.

So thanks to a unique world and several cool stuff to interact with (you can even pick up and casually smoke cigarettes, if you’d like), even a game just based around vandalism-based mayhem and running around like Sludge Life ends up being an intriguing piece of work. And similarly with Disc Room and Fall Guys, we see more games based around simple concepts, but then expanded upon greatly in various other areas and in notable ways. So thanks to a tried-and-true philosophy, it looks like Devolver Digital has yet another stellar year ahead of them. And that’s not counting the three or four games they still have yet to announce, if I’m not mistaken…