Ecology is a deeply-complicated system of checks and balances that never sits still for a second.  Ignoring considerations like safe shelter and reproduction for the moment, everything is hungry and everything is food.  Simulating an environment is no easy task, even when set in a sandy, rocky wasteland, because life is tenacious and will fill up nooks that seem impossible when given half a chance.  This is as true for biologic cell-based life as it is for folded paper, as evidenced in Eric Chahi and crew’s latest PS VR-exclusive game Paper Beast.

Paper Beast is a game in two parts: adventure and sandbox.  I recently got to don the headset to go inside both modes at PAX East, finding in the adventure a beautiful world on the edge of disaster and in sandbox a landscape to mold to my heart’s content.  Each mode felt like it had the potential to be a fully-fledged game and together they promise to add up to a unique experience playing with origami lifeforms.

The adventure started off simply, with the player seated in a tent.  After a few instructions I tore off the striped sheet making up the tent walls to see the rocky desert landscape outside and then the tent’s poles started to move.  The tent was actually held up by a large creature that, despite the number of legs, somehow manages to seem friendly rather than a horrifying giant spider-beast.  The tent-creature acts as a guide through this section of the game, showing the way to a nearby watering hole where smaller origami-animals wander about.  Nearby bushes grow wads of paper flowers that can be picked and fed to them, and when predators showed up there was the choice to either protect the friendly animals or let nature run its course.  As a VR viewer I was safe from the predators, and could either pick them up and fling them away or move the herbivores to safety.

Eventually I wandered on, escaping a storm by heading into a cave and then to small pond, which soon turned into a massive hole sucking down everything around it.  A quick escape and the adventure portion of the demo ended, leaving behind the idea that something was seriously wrong.  The game’s description says everything in here is born from a world of data hiding in long-forgotten servers, but for the bit I got to see that wasn’t on display.  Gaming is big and weird enough that it’s easy to accept being dropped into a desert where origami beasts wander through a beautiful wasteland, but it does appear there’s a story to discover that will provide a bit of logic to the world. 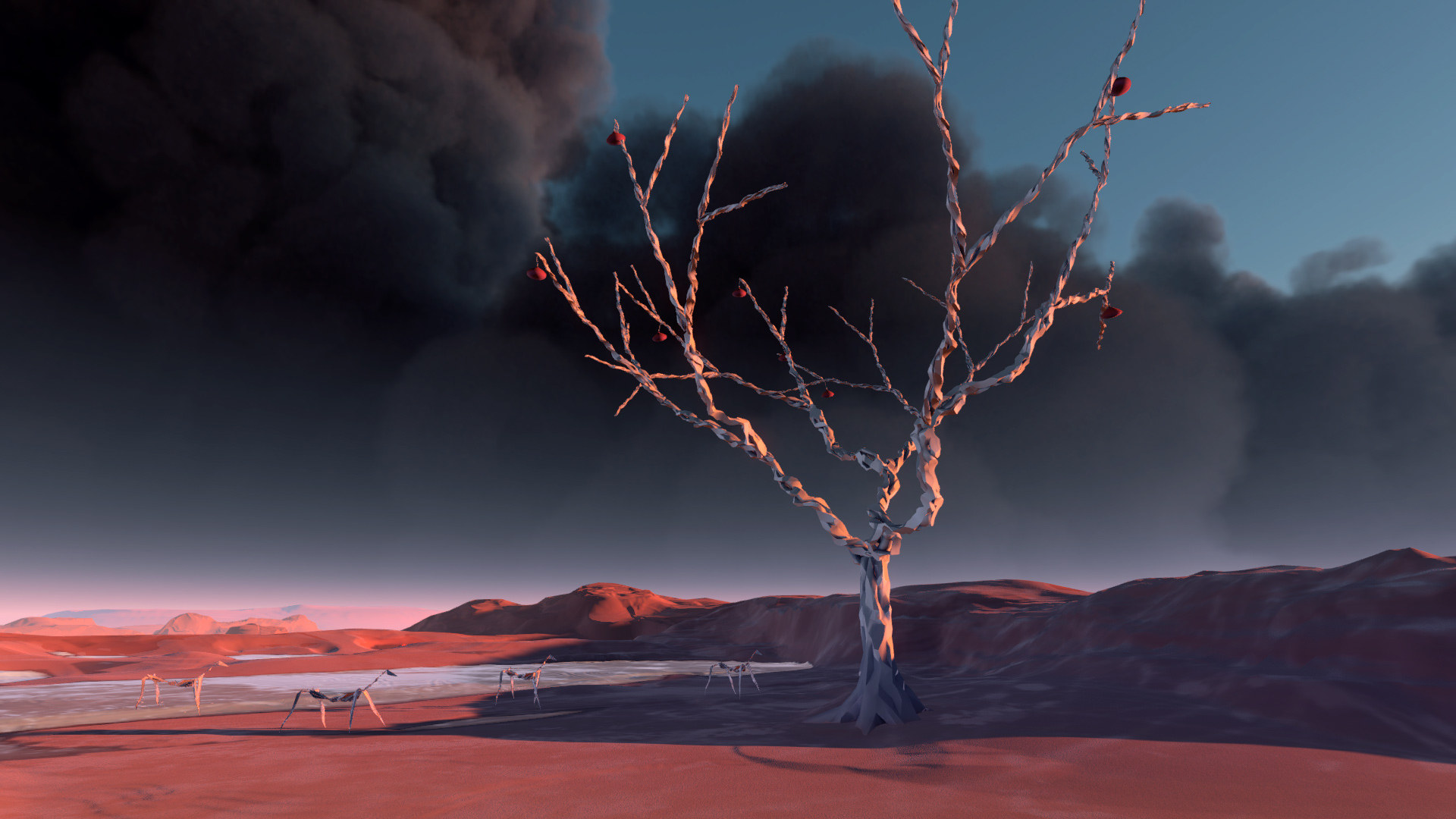 As for the simulation, this mode more readily showed off its potential.  Starting off by choosing a landscape size of small, medium or large, I started populating it with animals and plants before moving on to terraforming.  It didn’t take long at all to get into a creative state of mind, plopping down hills and rocks, creating depressions then filling them with water and even sending weather effects across the landscape.  Everything is simulated so it’s fascinating to watch rain collect and then overflow its puddle, eroding channels into the side of a hill.  After that it was time to play with climate, freezing everything and trying not to be too mean to the creatures by sending them sliding across the ice.  There were a good number of ways to play with the landscape, whether zoomed in at 1:1 scale or all the way out for a macro view, and if there hadn’t been a line of people waiting to play I’d have happily lost a good chunk of the afternoon exploring the possibilities.

Paper Beast creates a fascinating world of origami animals in a land where beautiful weather effects can nurture or destroy its inhabitants.  Whatever strangeness it happening will need the full release to be discovered, but that’s not actually all that far off.  Paper Beast is landing on PS4 on March 24, at which point it will be time to dig in properly to its mysteries while making a little garden world to call your own.