Infestations suck.  Whether it’s ants, fleas, termites or demons, the critters get into everything and cause havoc to the hard-won order of their new environment.  Ants and termites belong in the wilderness, fleas and demons should burn in Hell, and that’s as complicated as it gets.  The unwanted infestation in Panzer Paladin is a demonic invasion and removing it is going to take a mech suit a little more advanced than a bottle of kill-spray strapped to the back of an experienced fumigator.

Panzer Paladin is a NES-styled action-platformer about slashing demons while piloting a robo-suit that scavenges whatever weapons it can find along the way.  Axes, swords, knives, clubs, hockey sticks, spears or any other bright orange weapon its pilot can find make a nice supplement to its offensive standard attack, which is a straightforward punch when the melee stockpile is depleted.  Weapons are more than just demon-eradicators but also a bit like currency, needing to be spent now and then to progress.  Each one has a little health meter in the upper-right corner of the screen and using it too much causes it to break, but there’s also a special ability that instantly destroys the weapon so you can sacrifice one on its last hit to send it out in a blaze of glory.  Or throw it at an enemy, slam it into a checkpoint or save it for a special occasion.  Weapons are relatively common so there’s not much point in hoarding them. 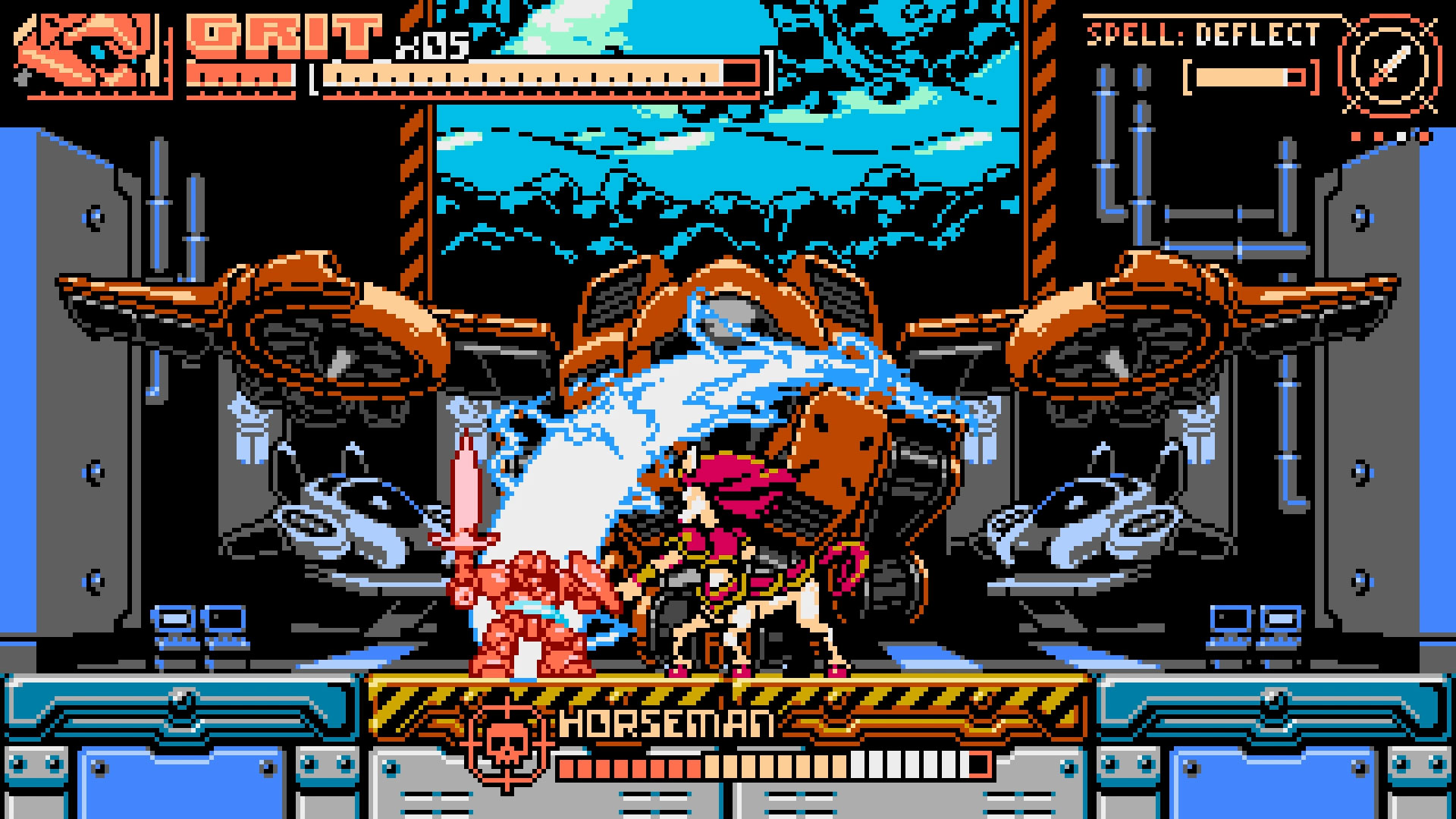 The facilities you’ll be exploring aren’t all scaled for giant-robo usage, though, so sometimes you’ll need to hop out.  The pilot isn’t completely defenseless, wielding an energy whip that’s got a good range and can also siphon energy from special stations that completely refill health.  The PAX demo only had a couple of areas where she was required, but her abilities were strong enough it seems likely she’ll get a nice workout later in the game.

I got to play an early level of Panzer Paladin and Tribute Games were kind enough to supply the video feed, so below is my second run-through of the demo.  It’s got platforming, combat, hidden secrets, swinging from grappling points and a nice mini-boss fight at the end before a nearly screen-sized sprite rises up.  What’s not so obvious is that it felt good to play, with everything being quick and responsive while the level design even fit in a bit of environmental storytelling as it progressed.  Panzer Paladin is shaping up nicely and after my play-time I’m looking forward to seeing what other surprises and set-pieces it has in store.