It’s with a sickening, squelching sound that the player is spat into the world of Hellpoint, Cradle Games’ upcoming action RPG. A brief look around reveals an environment that feels both corporate and cultish, but that might not mean anything since some corporations can already feel like a bit of a cult. Checking the body, it’s seen that the hero is neither human nor clothed, apparently birthed out of a strange chamber just behind. This newly-gained life isn’t one of joy and coddling, though, as it’s quickly learned that the creation was done to serve a specific means: clearing out all of these darn demons that kind of got a bit out of control. As a set up to an SoulsBorne style actioner, it works. The fact that the title liberally applies that Dead Space style sci-fi horror with more stygian cosmic elements revels that this isn’t a typical Souls-like.

Making the way through the world reveals more than a few influences that were lifted out of From Software’s juggernaut. Spacial rifts take the place of bonfires, there’s a Estus Flask in the form of an injectable syringe and stamina management is paramount to winning the day from the demons that seem to be around every corner, waiting to ambush the player. This isn’t to say that the game doesn’t bring some things of its own to the table. The healing item is refilled by attacking the enemies, leaving the player in situations where the best course of action isn’t exactly to run, but to to the fight to the foe and pray that skill wins out. The most exciting element comes in the form of local cooperative multiplayer. While one might worry that this might reduce the stress and elation from overcoming a particularly nasty situation, pulling in a Sun Bro for some couch time sounds like a good way to spend the day. 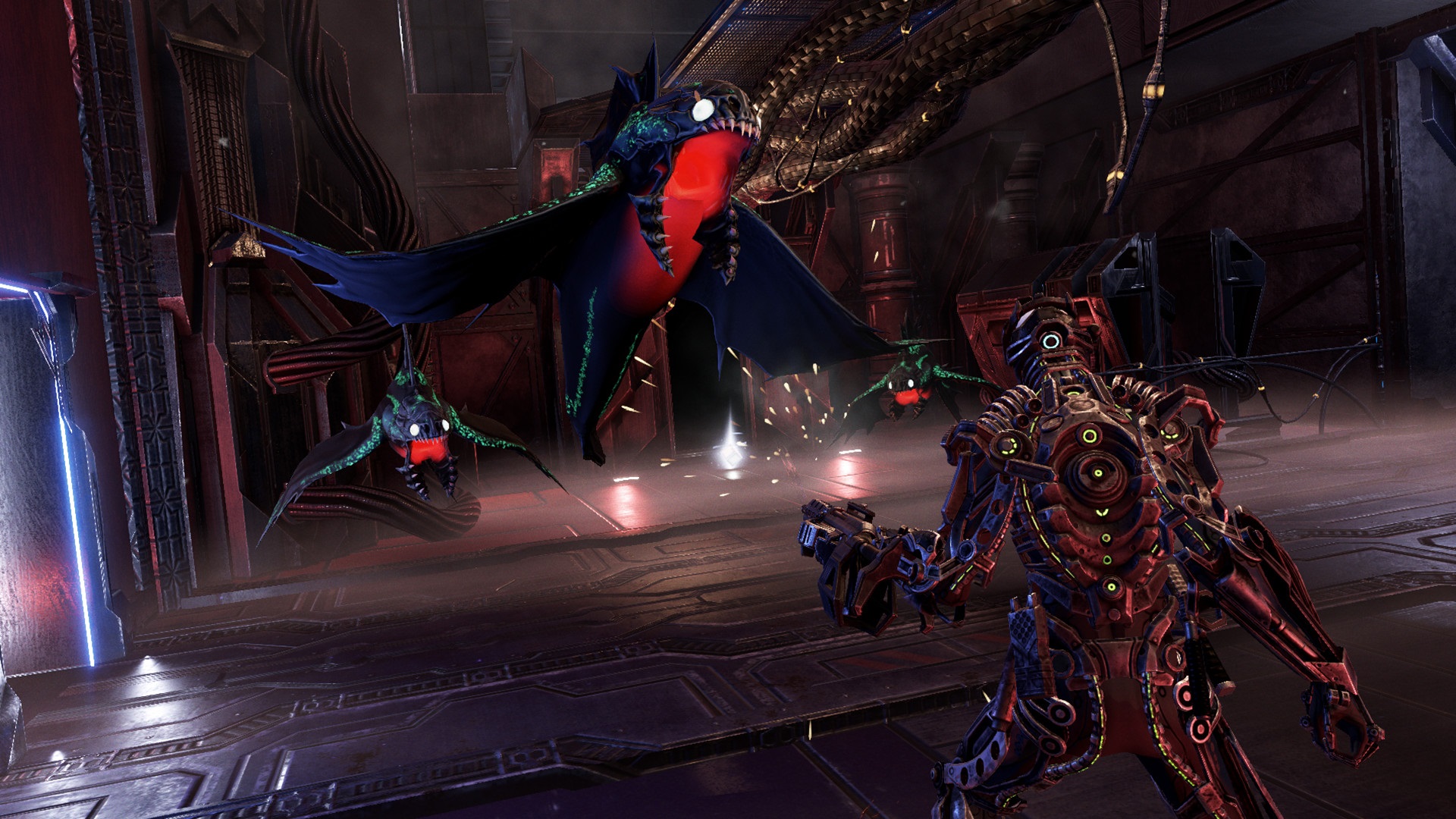 This demo wasn’t multiplayer, however, and I was instead forced to face the demonic outbreak in space station Irid Novo all by my lonesome. Making my way through the corridors and halls, it wasn’t long before a picked up a particularly nasty pipe with a sharp edge at the end. Praying that demons can get tetanus, I pushed on, ambushing the first ghoul as it was feeding. A few more quick dispatches and it wasn’t long before a false sense of security began to set in. It wasn’t until I platformed my way across a walkway did I come across a staircase that spat out ghouls like a clown car looking to see how I was put together. In this mix was an armored beast that didn’t seem keen on letting me get further. Backing away, I accidentally fell off of the walkway into the expansive hall below, where more creatures where waiting to greet me in the like it was a surprise party and I was the pinata. So it was that I learned that Hellpoint isn’t messing around.

When not playing like a complete buffoon, though, one quickly discovers an extremely fun title that challenges the player while offering a different feel.  Each attack is still extremely important and it’s vital that one measures there strikes, but the attacks can be cancelled into a dodge if there is still stamina in the tank. The trade off to this seems to be that stamina gets eaten up at a bit of a quicker pace, requiring that the player still maintains a semblance of care. Running to a rift to spend some experience doesn’t necessarily respawn the enemies, so taking a moment to power up before a boss fight isn’t the worst idea requiring another slog through the same spot. Still, grinding is still an option, and they will come back if the player eats it and has to go reclaim their dropped experience. 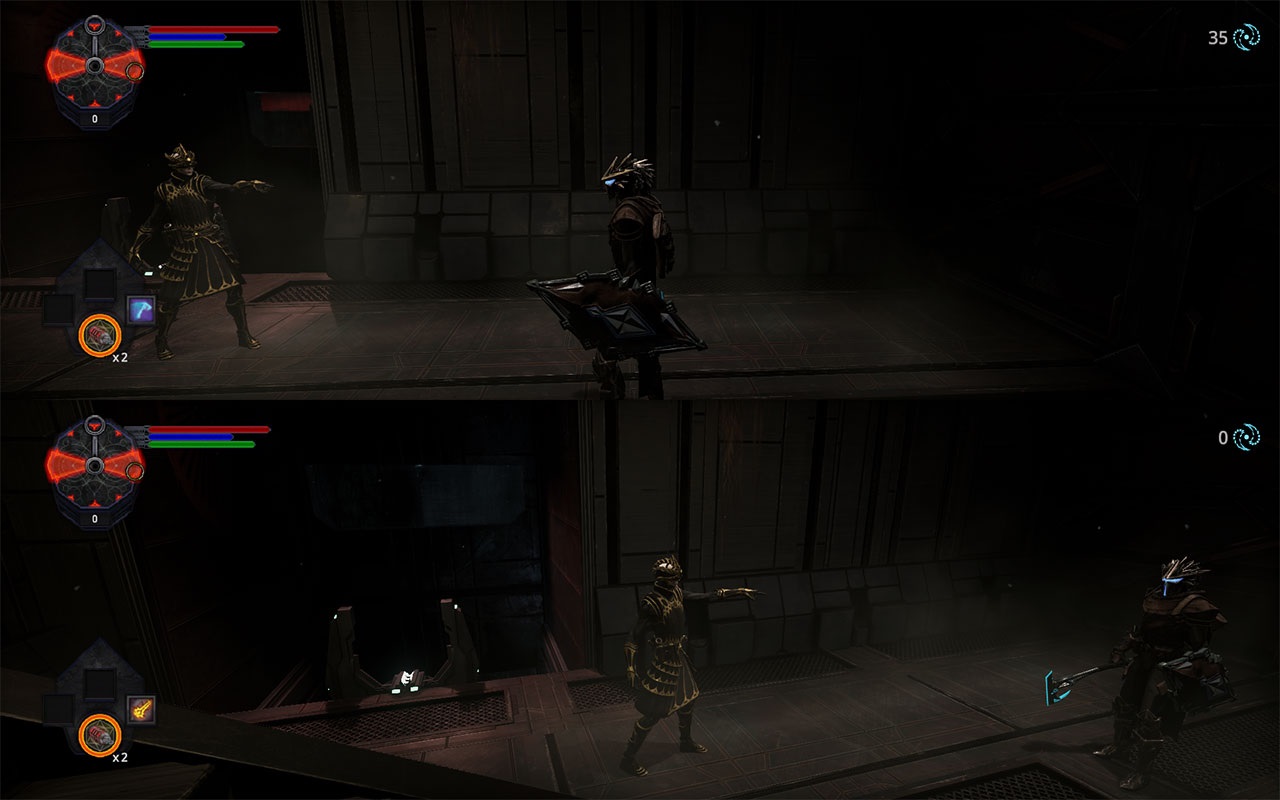 The map is also laden with alternate paths and ways to explore. Near the end of the demo, the choice is presented to go left into a boss area or swing right and have to deal with some tall, ethereal knight-looking creatures looking to split the player open. Neither option is particularly safe, to say the least.

Hellpoint looks to be a great title to quench the thirst of players more interested in a classic roguelike experience that weren’t satisfied with last year’s Sekiro or The Surge 2. The combat feels right and the tweaks to the formula look to give it a unique flair while hewing close to the elements that really make the classic tick. Those looking to sink their teeth into this one won’t have too long to wait, as the title is set to hit PC, Linux, Mac, PlayStation 4, Xbox One and Switch as publisher TinyBuild have announced that it will launch later this year.