As if life isn’t difficult enough being a teenager, siblings Jenn and Tristan must have some serious abandonment issues. Orphaned in the pubescent stage, they thought things were turning around when a well-off scientist took them in. Since life hates everybody, the aforementioned scientist disappeared, leaving them orphaned a second time. It’s only then that they discover a portal room to various monster-filled dungeons in the basement of the very house they’re living in. It seems likely that the disappearance of their caretaker and this phenomenon might be related. So it is that the duo sets forth to find out exactly what the heck is going on.

This is the set-up for 1P2P’s Young Souls, a cartoonish beat ’em up filled with leveling up, loot and more cosmetics than one typically sees in a Final Fight style action game. While other developers have tried to meld heavy loot and RPG mechanics to a classic early ’90s era beat ’em up before, based on the show floor demo, 1P2P seems to have found the perfect blend to the formula. 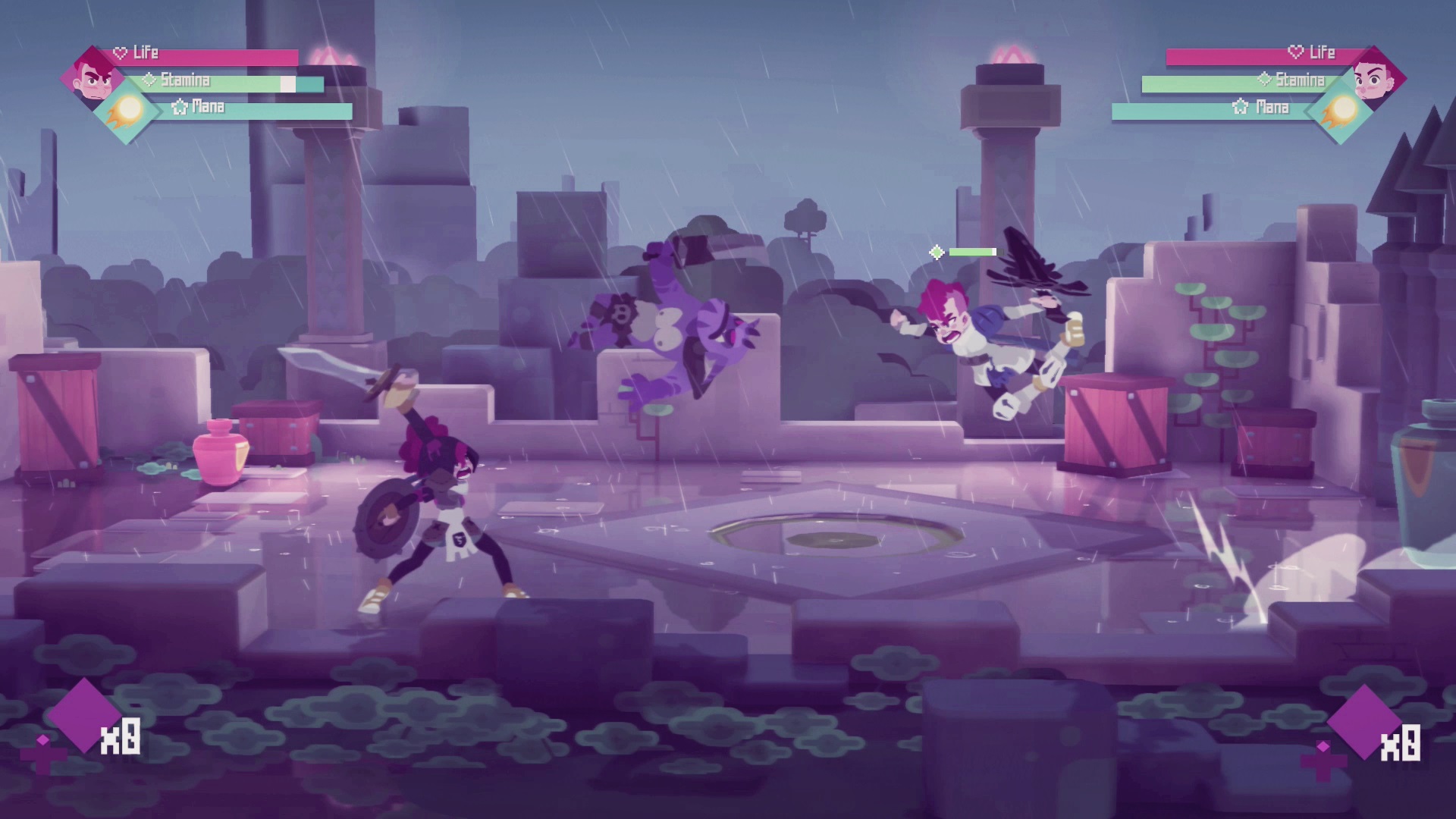 The basic game flow takes place in a day/night cycle. During the daylight hours, the player can explore the town, purchasing new cosmetics, and visit the gym to exercise for stat upgrades. The nighttime is the right time, however, for beating the ever loving crud out of goblins and various other monsters. During the demo, I hit town first and put the duo through some stationary bike routines and took a look at what weapons and clothing options were available. As nothing could top the ridiculous kitty hat I already had them sporting, I had them stay as is and headed back to the mansion. This is when I got into the game play proper.

Heading to the basement, I popped open a portal and was shown a variety of dungeons to explore. Deciding not to be too overly ambitious, I selected one that was level appropriate. Venturing forward, it played like a classic beat ’em up with a well-animated flow and challenging but not unfair groupings of enemies. Since the siblings each had a different weapon type, and one can switch seamlessly between them in single-player mode, there were ample options and variety for combat. I got through the level rather easily, only meeting some slight resistance from the level boss. When the stage was finished, there’s the option to continue on or hit the sack for the night. Feeling like I could take on a more difficult challenge, I opted to rest with the express purpose of going back the next night and selecting a dungeon that was a slightly higher level than mine. 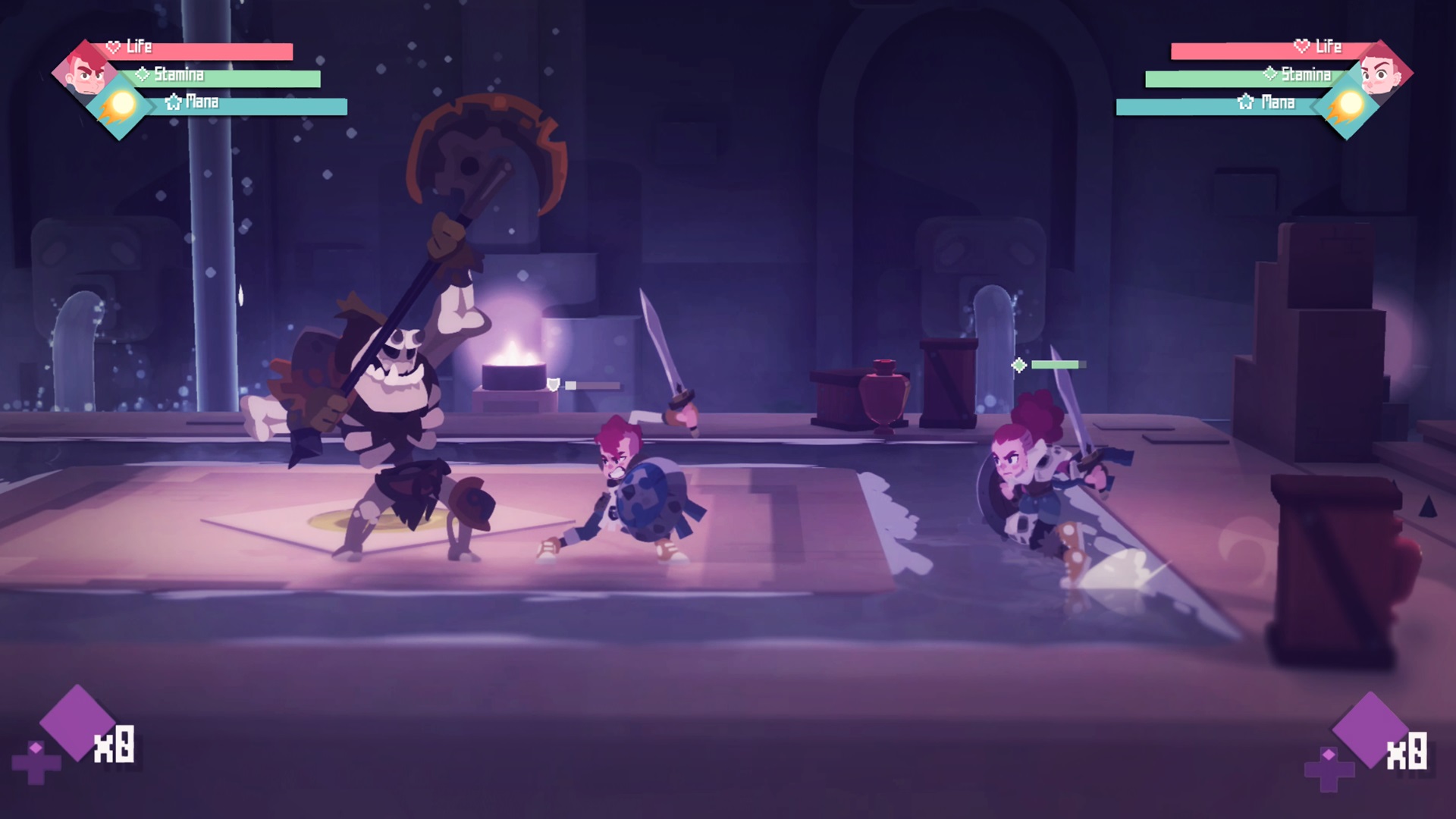 This proved to be a mistake. Starting off, I seemed to be doing well enough; this lulled me into a false sense of security. As I progressed through the stage, I came across a monster that I wasn’t leveled for. This was my undoing, as the monster enthusiastically proceeded to devour all that was good in the world, including the siblings. Thus, it was learned that one should stick to the game’s normal flow and not go poking where you’re not ready yet. To be entirely fair, if I had anticipated this challenge, I could have likely surmounted the odds and came through. It’s not that it was impossible; the developers took the time to insure that the balance is tuned extremely well.

While playing these levels, one can’t help but appreciate the animation and art design. It has a stylistic and whimsical art style that takes inspiration from anime, web-comics and the better children’s cartoons. They do this without over-animating, making the combat feel seamless and fast-paced. It’s a modern take on the arcade games of yore, while adding plenty of depth to give players a reason to keep coming back for hours on end. 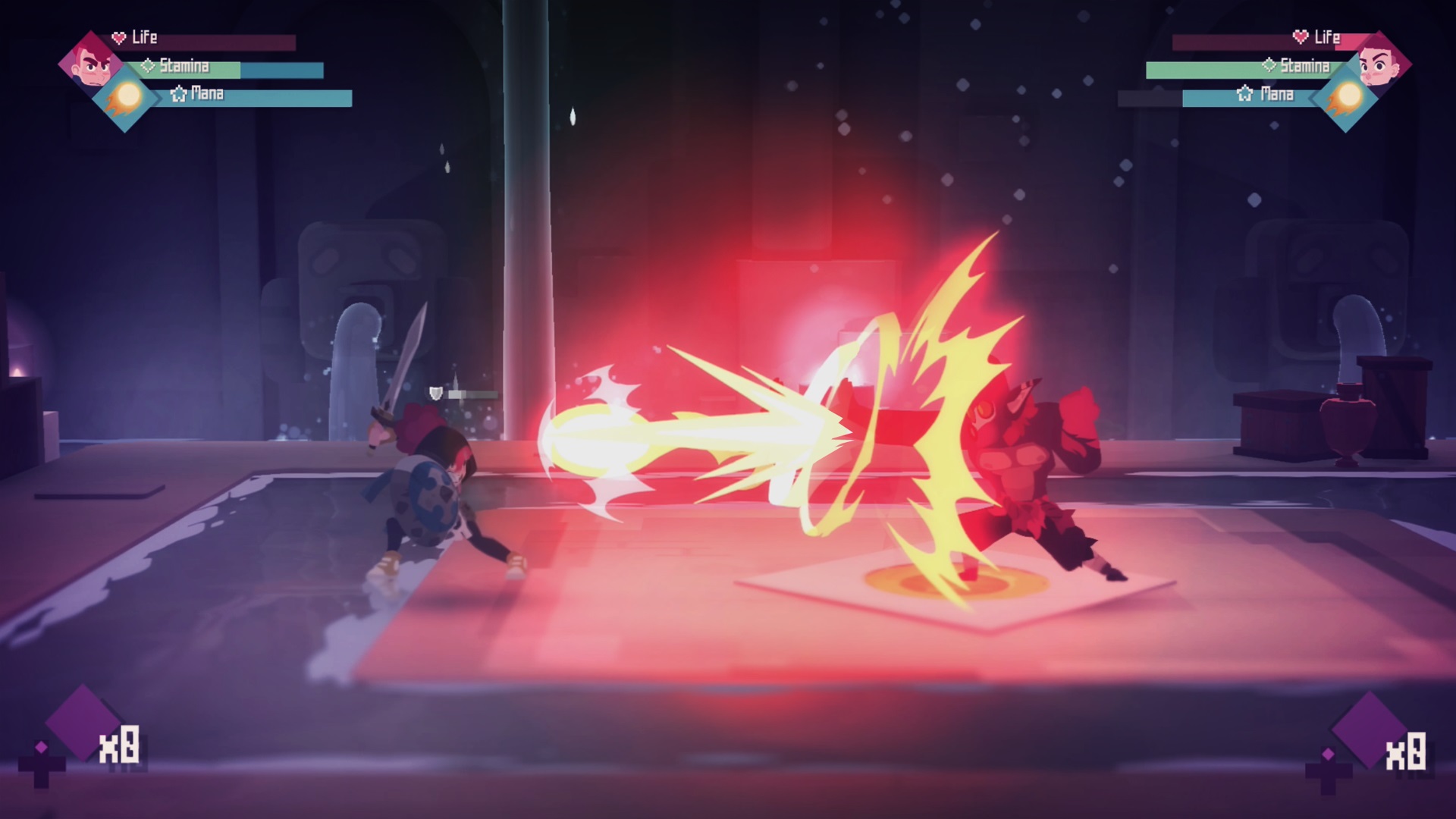 With a game like this, multiplayer is a must. It’s always a better time when you go goblin-slaying with a friend. This game has enough meat, however, to make playing through single-player interesting. With the various cosmetics to unlock and differing weapons behavior, variety isn’t an issue the way it can be with other games in this style. Based on the game demo, this is a formula that doesn’t seem like it’ll wear out its welcome before the credits roll. Unfortunately, the final release date is up in the air at the time of writing. This is disappointing, as I’m interested in getting my hands on the final product as soon as possible. In the meantime, Young Souls is a title worth watching.