When it first hit the Neo Geo, reaction wasn’t kind to Windjammers. It seemed simple and a bit dull compared to the competitive fighting games and rock hard shooters that the platform built itself upon. Sure, sports games were fine there too, but Windjammers didn’t even have a line on Baseball Stars. We were really stupid to be honest. I include myself in that group. Time moved on, and more and more people finally gave it a chance through various means. What we all discovered was a title that was deceptively simple, but had so much more going on underneath. The developers at DotEmu ranked itself among the fans and tracked down the rights. With a re-release of the title on PlayStation 4, Vita and Switch under their belts, they decided it was time to make a proper sequel to the 1994 release with Windjammers 2.

Since the original hasn’t reached a critical mass of a following, a brief explanation is in order. Two players face off with each other on a field in an overhead view, guarding a goal that spans the entire player’s side. The idea is to get the frisbee-like power disc into the goal. Barring that, causing the opponent to miss a short catch will also put points on the board. Breaking it down to its very base components, the game is a disc-based take on tennis, with quite a bit more bright coloring. 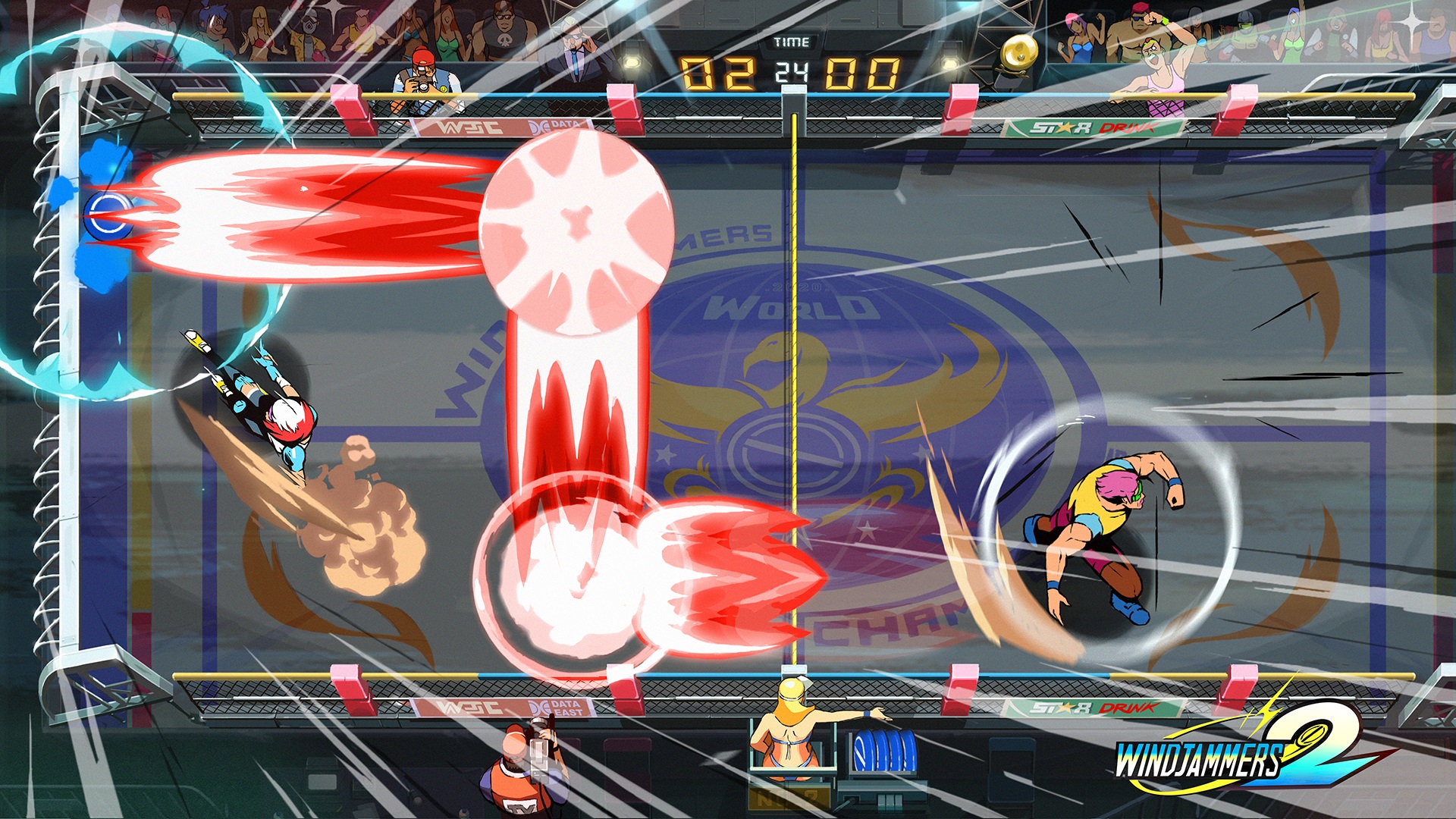 Of course, since the originator has gained a significant cult following, there are other titles that can charitably be described as inspired by the game either already out or upcoming. What sets Windjammers 2 apart is the devotion to getting the feel of the original just right. This meant that the developers at DotEmu spent real time breaking down the original code to really get a good idea for how it worked. While it might appear to be a simple game, the physics of the throws, the speed of the disc, the flow of the matches had to be captured just right to nail the feel. While this was hard work, the impression is that they had a great time cracking it wide open and learning how to fit the bolts together in a faithful but modern implementation of the game.

This shows through in the game. Watching it played, it seems like it should be easy to dominate. With hands on the controller, though, one quickly understands. This isn’t a title about entering some arcane sweep of the stick and five button combo to pull off a special move. It’s about learning to read the opponent and predict what they will do. It’s a distillation of the mind game component in a fighting game with a low barrier to entry, allowing players to face off on even footing. Bouncing the disc off the side of the area to fake out the opponent might seem like a worthwhile strategy, but it’s still an easy catch if the opponent anticipates it. Getting the other person used to a flow of complex throws and fast shots only to lob an easy toss to the fore of their side of the field is a viable strategy. Even the specials attacks, executed with a button press, can be caught by a player in the right mind space, so fake outs and cunning play will always win out. 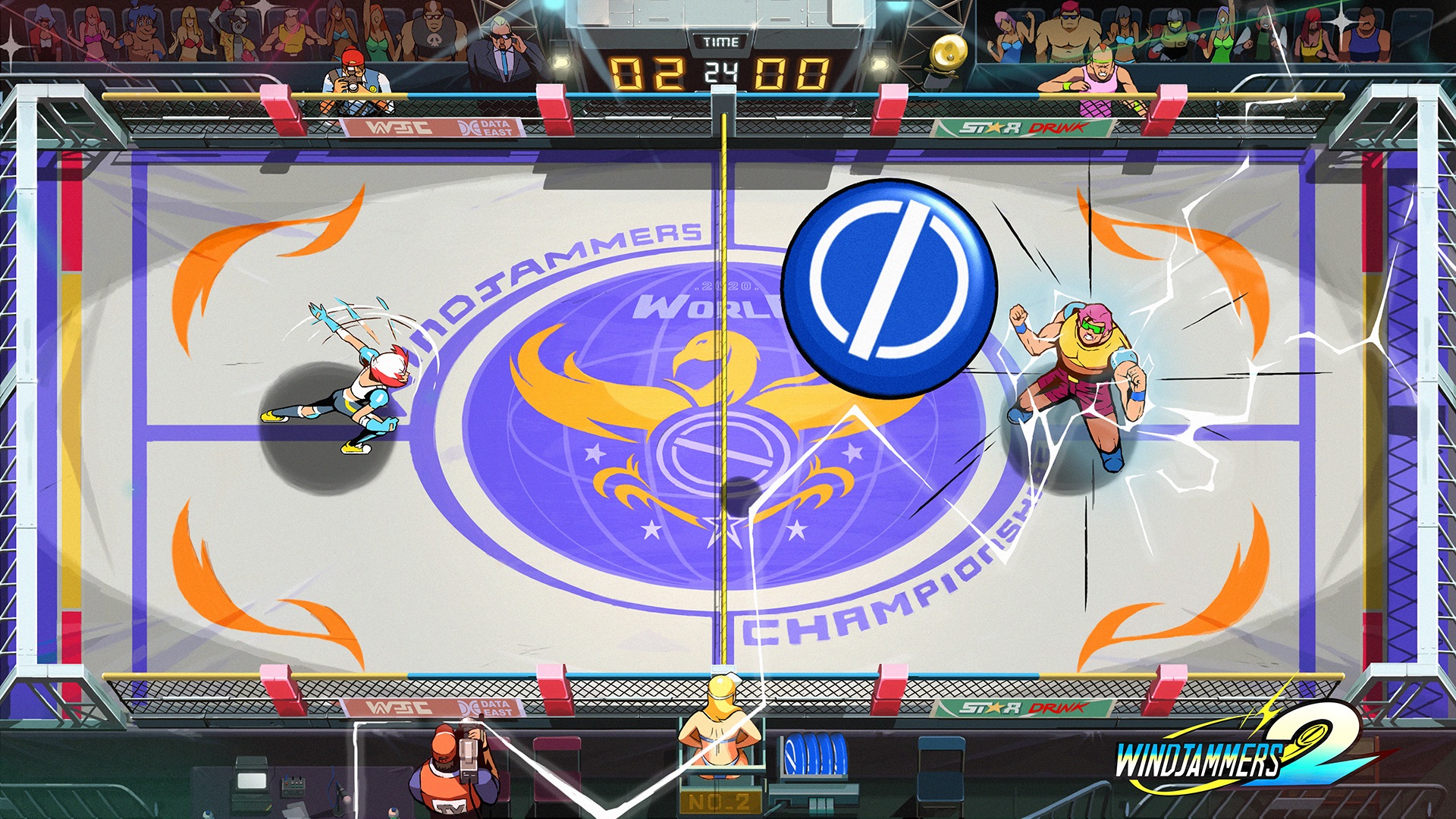 It should be noted that I’m writing like I’m an absolute expert, but I’m actually not great at the game. In practice, I played quite a few matches on the show floor but never actually won completely. I took some sets, sure, and understood how I did it, but I lost every full match. I also understood why this happened and I have no one to blame but myself. My various opponents picked up on what I was trying to do quicker than I picked up on them, and hit the right throws to cause me me to zig instead of zag. Instead of being frustrated by this, though, I cannot help but want to get back in and try again, utilizing what I have learned to do better. That right there is the mark of a quality competitive game: even losing doesn’t feel frustrating. Fortunately, there will be plenty of opportunity to do so when Windjammers 2 launches for PC, Switch and Stadia later this year as it will feature full online support with different modes along with the expected, and appreciated, local options.