While virtual reality devices still aren’t commonplace in households, the games they produce are steadily becoming better with continued support from developers who want to see it branch out even more. Evasion is one of the latest titles tossing itself into the ring, as a first-person shooter with unique takes on combat that make it feel almost natural to move around, depending on the one playing. VR can differ from person to person, but Evasion is a great start that feels almost natural and an entry point for the future.

Like most VR titles, the best way to get into anything fairly combat heavy is to try out the tutorial. Evasion supplies one teaching basic controls and how to fight back against enemies. The controls can be changed to warping or actually using the sticks to move forward and there seems to be a good amount of customization there to accommodate for those who are more sensitive to motion sickness. After running through all the basics, players can then set out by choosing one of four classes. Each has their own unique abilities they bring to combat, in order to mix things up for the future multiplayer aspect. There’s a class that acts as a healer, a tank, a simple solider and a technical engineer. Each one is unique enough to make them feel like individuals, which is a pleasant surprise in a VR title. 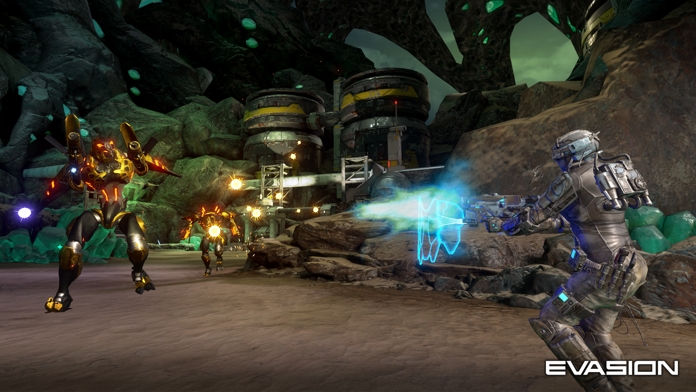 Gameplay is what one might expect from a FPS experience in VR, in this case showcased using the PlayStation VR with the gun controller. One of the unique aspects of Evasion is that the end of the gun has a shield on it to block enemy fire, while also shooting back at the same time. It’s a bit like a first person bullet hell, where dodging and firing back is all strategic. Players can crouch down in order to hide behind rocks and peek out to get just the shot they need on incoming enemies. There’s also a tether which can be used to various effects depending on the character, with most being able to grab healing and damage up boosters to help in combat.

The visuals look wonderful for a VR title too, with lots of detailed textures making it feel like any other modern FPS. Character models are fully rendered, so looking down shows an entire body and not just floating hands gripping a gun. Enemies provide a good deal of diversity and approach to attacking them. Some will mostly stand still and are easy to hit, while others really need to be led in order to get a good shot on them. There’s a little bit of a puzzle element and although it seems mostly simple by carrying key items from one area to another, it’s a nice side activity to do while also still taking on enemies at the same time as they continue to ambush players. 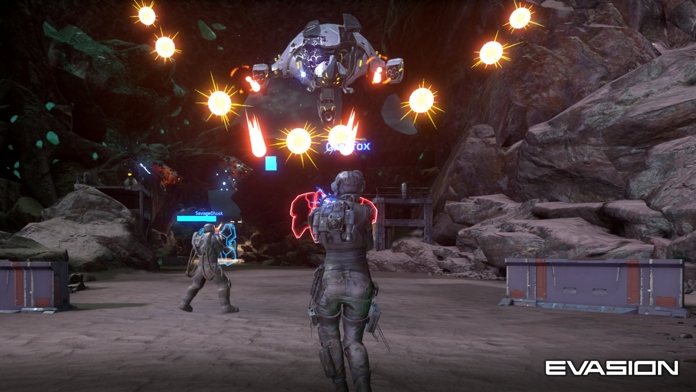 While not the first FPS entry into VR, Evasion is doing a great job making itself really feel like a full title and not a quick simple entry with a very basic look. There’s a lot going on, and the multiplayer aspect will add a load of fun for those who want to team up to enjoy it to the fullest. The only real notable downside is despite the gun peripheral, playing on PSVR with the gun controller can feel a bit hectic since the controller itself is often hard to use during busy and frantic moments of shooting. Anyone who has VR and wants to dive into the well-paced bullet hell action of Evasion doesn’t have long to wait, as it’s planned to release for nearly ever VR platform on October 9.