I’ve often regarded asynchronous multiplayer to be a more favorable alternative when it comes to online experiences. And I’m not just saying that because (outside of coverage purposes, or maybe even some rare oddity that is genuine enjoyment) competitive multiplayer has so often resulted in personal disappointment when it comes to actually interacting with other people. I won’t shy away from personal bias steering this towards certain conclusions, but playing through Phantom Abyss reminds me of how, even on paper, asynchronous forms of engagement with fellow players — helpful or otherwise — is a curious aspect of game design. One more prone to personal investigation and at the best of times can lead to surprising moments during one’s travels. For all the tricks and traps Team WIBY place amid their procedural temples, the one thing that resonates wonderfully with me is how the game handles player interaction. How Phantom Abyss ingeniously straddles the line between co-operative and competitive. How Team WIBY have, unintentionally or otherwise, conjured a paradox here. Phantom Abyss is all about team-work…and it’s not. 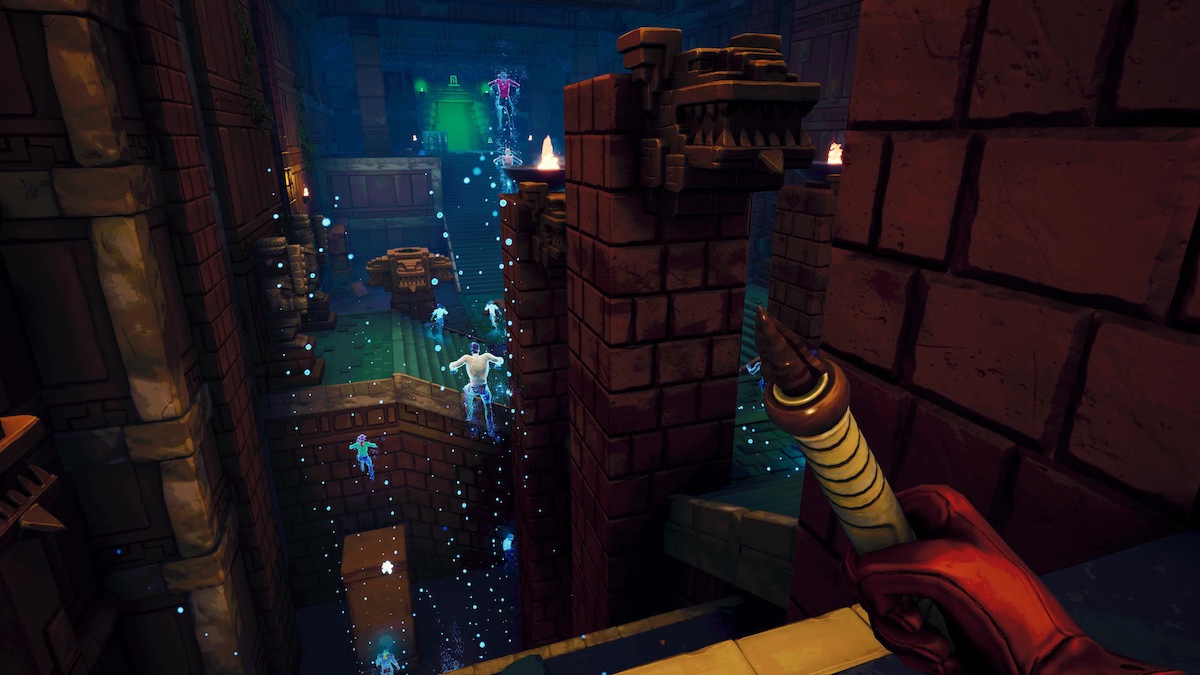 How best to describe this? How best do I go about nullifying that baffled “what on Earth are you talking about?” look you’re no doubt pointing in my figurative direction? Let me put it this way: Phantom Abyss is of course about attaining victory over everyone else. Being the one sole player in the world to get to the end of a certain temple route. To claim, boldly or otherwise, that that one procedurally-generated, unique run — of which all players get one shot and one shot only, to beat without dying before the algorithm assembles another randomly-assigned challenge — has been conquered by yourself. Aided by the phantoms of previous, fallen players or not. It’s a game that wants to fill you with confidence, just so it can knock you right back down. It’s a game about being quick on response, all the while taking your time in doing so. To sprint after the phantoms of fallen players to possibly gain insight into how they may have failed — and what specifically to look out for when you get there — whilst at the same time, trying one’s best not to treat this as some hyper-active speed-run of sorts.

Rarely do individual runs through the perilous chambers and descending corridors of Phantom Abyss feel not conflicted. But it’s an exciting kind of conflict — one which asks of you what you prize most in achieving victory: knowledge or safety. Comfort in the collective of replayed phantoms guiding you to hidden treasure chests and ideal grappling points…or solitude in keeping to one’s self so as to avoid blindly walking straight into the exact same death-trap that may well have caught those poor souls off-guard in equal measure. This is where the asynchronous nature of Phantom Abyss — of being both reliant yet cautious of other players’ actions — truly hits its stride. Blossoming into a tense face-off between one’s conflicting ideals. Optimism and pessimism; high-risk and low-risk. And in some cases: between knowing what to do when caught suddenly off-guard and having no clue whatsoever. The most striking moment of personal apprehension and one I can still remember fondly: casually following about six or seven phantoms all making the same hop, skip and a jump in-between platforming segments. To then transition moments later, it hits you: there are no phantoms here — you are in fact the one player having made it the furthest. You’re on your own now. 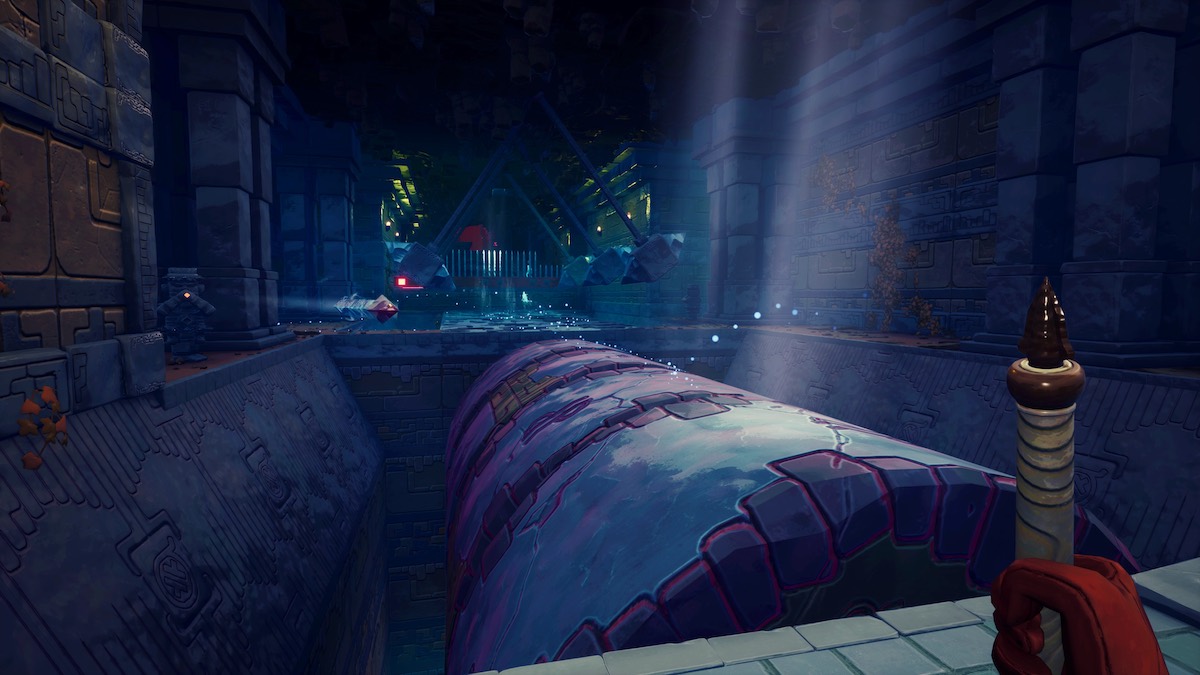 It’s hard to explain how hard it hit me when this first occurred, as if running the final floor with one heart left wasn’t enough pressure. But that’s where the real effectiveness of the game’s “one and only one chance” premise hits home. Even if the environments themselves are not the most extravagant to marvel at or that the algorithmic stitching-together of rooms quickly has recently-visited moments retread or simply reversed. Like most roguelite games, Phantom Abyss‘ limitations are easy to spot. But while there’s still a level of danger and care to consider when tackling any dungeon’s assortment of traps and falling platforms alike, what alleviates this concern on repetition is that craving to know what lies ahead. To see, as noted, if those phantoms of former players can (unbeknownst to any of them) guide you towards victory. In any other scenario, claiming victory through another’s failings may sound a little harsh, but Phantom Abyss pulls this off in a way that is both smart and consistently riddled with many a risk.

It could all go completely wrong. You may end up blindly following the dotted trail of a previous player’s attempt to then crash face-first into a hidden bed of spikes. Worse, be completely unaware that a pad that spawns a falling stone above you was just lying in wait behind that wall or around that corner. You can’t help but feel there’s something of a moral lesson Team WIBY are trying to tell us here, but it’s that altering of tactics — determining whether you want to put your fate (partially or otherwise) in the hands of players whom never intended to be someone’s guide — that’s so interesting a mechanic. More so when you realize that the same may happen to you: that your soon-to-be doomed run may spur the next player, or the player after that, to reach that coveted relic. Sure it’ll hurt to know your chance is gone and that dungeon will never be touched again, but as a design choice — as a means to draw out the competitive nature in all of us, without ever coming face to face directly with someone — I can’t help but respect how indirect yet effective that conflict is. 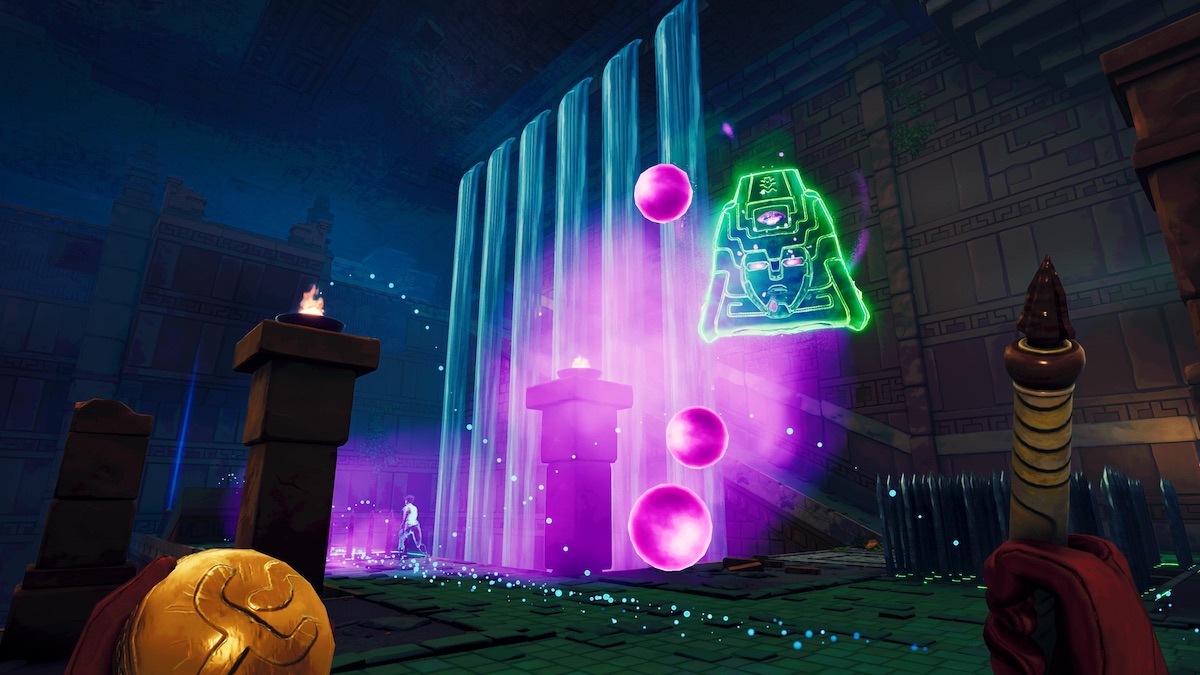 Of course, while Phantom Abyss is not a game about direct conflict, it’s still one governed by quick reflexes and a sandbox-like applying of one’s trustee whip. A tool used prominently for navigation and movement, be it latching onto nearby platforms, or even as a means to swing from one section of a wall to another. An acrobatic feat of outmaneuvering that comes in handy when the occasional angered guardians decides to show itself. A varied assortment of floating heads all of whom wield some manner of offensive (and aggressively so) attack. Attacks that increase with both intensity and duration, the more floors you descend down. Some guardians are admittedly more manageable than others. Or to put it another way: some attacks are more likely to be better served if they had some form of indicator. Given that the only thing players have in order to dodge something like a projectile beam or a ball of toxic gas is the assumption of where it’s coming…and nothing else.

Further to that, some of Phantom Abyss’ means of assistance don’t always perform as fluidly as one would hope in the more mad-dash of circumstances. The indicator to note that your whip will latch onto platforms can vary wildly regardless of distance and the prompt to perform a ground-roll — so as to avoid fall-damage — is annoyingly selective in when it wants to provide a safe landing for your player-character. Resulting in a majority of cases being reliant on using the whip instead, which serves as a sufficient-enough substitute. Even so, littered in spots by a few of these unfortunate slip-ups, Phantom Abyss has already proven itself to be a fascinating take on asynchronous multiplayer where pure competitiveness is technically present, yet whose finer details house so much more than another “winner takes all” scenario. It’s how Team WIBY have utilized this indirect co-operativeness of asynchronous play that is most intriguing. The kind of emergent form of progression where would-be benefits and risks alike are seldom seen, but whose pull to see where it leads forever lingers. It’s that harmonious blend of intrigue and terror — of pushing towards victory, knowing full well failure may be but an amateurish slip-up away — that grants Phantom Abyss this paradoxical allure of a game you dread, yet one you just can’t seem to turn away from.