Valfaris was both a space-fortress and near-paradise, which is an odd combination for a military outpost but apparently its inhabitants made it work.  Then one day the fortress disappeared, gone without a trace, but like an interstellar ghost ship, it returned as a mysterious hulk orbiting a dead star.  Therion was a resident of Valfaris who had the luck to be away when it disappeared and now he’s headed into the corrupted fortress to see what’s left.  The paradise is dead and there’s no way to know what killed it from the outside, so Therion heads back home with sword and guns to solve the mystery in the only way he can: heavy firepower backed up by heavier guitar.

Valfaris is the newest outing from the team that made Slain: Back From Hell and like that game it’s a heavy metal infused action-platformer set in a badass world of oppressive forces waiting for an antihero to put them down for good.  The major difference is setting, with Valfaris being dark sci-fi rather than gothic fantasy, but if you played the previous game you’ll feel right at home running and gunning through a broken citadel infested with soldiers, spiders, armored cyber-dogs and whatever other defenders might be hiding in the depths.  While Valfaris is targeting a mid-2019 release I was able to play a demo of the first level and it doesn’t waste any time getting straight to the brutal action.

Therion isn’t a complicated fighter.  He’s got an infinite-ammo pistol that does a solid amount of damage, a laser sword for close-range swiping, and an energy bar that powers a shield and secondary weapon.  Shooting enemies is both effective and safer but beating on creatures with the sword releases blue orbs that refill the energy bar.  So long as you’re moving forward and always killing things it all works out fine no matter which weapon you favor, but the enemies fight back hard and death comes easy.  Dying just puts you back to the last checkpoint, though, but there’s a risk/reward mechanic that determines how far back that was.

Green crystals in the levels are needed to activate a checkpoint. The crystals are easy to find, at least on the demo level, hanging out in the path you’ll need to take waiting to be collected.  The thing about the crystals is they’re also currency, used at level’s end to earn extra goodies.  The demo has one crystal per checkpoint but a replay or two is all it takes to get a sense of when to activate a checkpoint or go on by.  Or maybe sit there for a couple seconds thinking about it while eyeing the health bar.  There may (or may not) be an extra-special reward for clearing the level without any checkpoints but I wasn’t good enough to discover it. 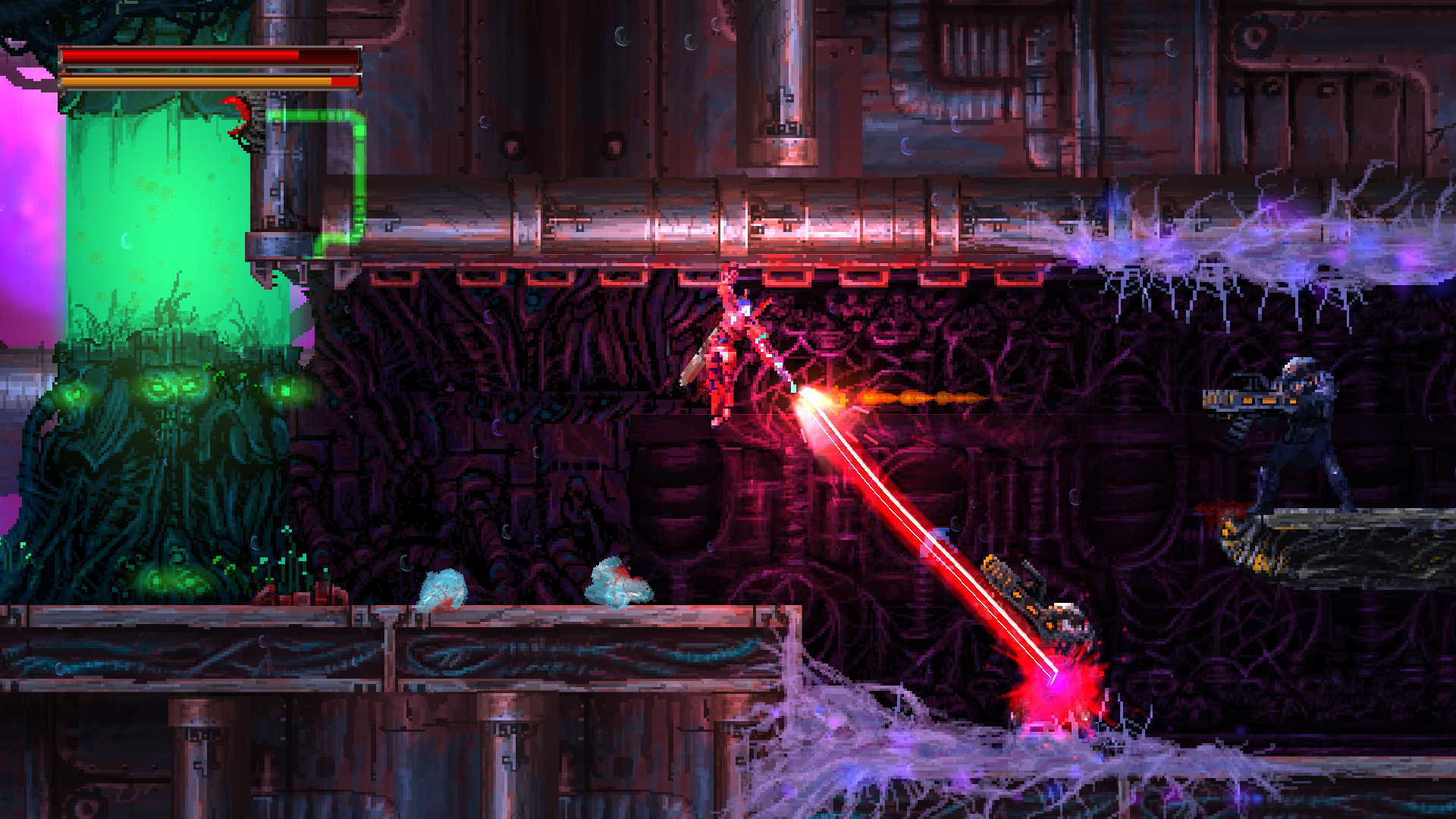 While mechanics are nice, the other important part of an action-platformer is level design, and Valfaris‘ intro level has some fun areas with a good amount of variety to blast through.  The relatively flat run & gun section that kicks things off quickly starts adding rickety platforms and climbable scaffolding, and once Therion falls into the depths of the citadel there are hidden areas to open up as well.  A section fighting against dogs and soldiers in a relatively open area leads to tight passages crammed with mecha-spiders, and then into an sealed area where several soldiers at once teleport in while an infinite-energy powerup lets Therion tear loose with the minigun.  Then it’s up a pile of debris, past a few more spiders, and on to a mini-boss fight with a hidden section holding whatever it is Blood Metal turns out to be waiting just past it.  Whatever you’re doing one minute won’t be the thing you’re doing the next, except in the broad strokes of killing a whole lot of baddies.

There’s going to be a lot more to Valfaris than I got to see in the demo, both in terms of content and features such as gun upgrading, but the bit I played made me want to see more.  The game feels like one of those weird Genesis titles you might find at a rental store back in the ’90s, maybe not ultra-polished like Sonic the Hedgehog, but with a dark, gritty style that more than makes up the difference.  The music and art fit together perfectly and the violent action moves along nicely thanks to the varied terrain and occasional secret area.  Whatever secret force stole and corrupted the fortress of Valfaris is lying in wait in the heart of the citadel and it promises a killer fight against the heavy metal warrior blasting his way into the ruined home.