A long time ago games had genres and tended to stay in their lanes.  Sim City was Sim City, Alundra was Alundra, and that’s it.  There were always experiments, of course, but even something like the classic ActRaiser felt like two separate games you played one at a time.  A couple decades of genre evolution and PC horsepower can change a lot, though, and nowadays you can’t throw a rock without hitting an RPG twin-stick shooter visual novel with farming elements.  Kingdom Builders is a combination action-RPG and town builder with a bit of Pikmin thrown in for good measure, and it’s just been released on Steam in an Early Access form after a successful and fun demo during the Steam Next Fest.

Like any good town constructor, Kingdom Builders starts you off with just a little bit more than nothing barring a wilderness full of trees and a simple axe to start harvesting lumber with.  No matter how industrious, a single wannabe-ruler can’t build everything by themselves, so after tossing down the plans for a house, it’s time to beat up a tree for the necessary wood.  Five trees equals five logs, which is enough to complete the house and get the very first villager.  Who just walks around doing not much of anything because they don’t have a job yet.  OK, fine, this is workable, villagers are going to need food deposited at the town center and there’s no way you’ll want to carry one berry at a time to keep the new guy fed.  Construct a berry farm, assign the villager a job as a farmer, and that problem starts to sort itself out.  Next up, more houses to get more people, and soon there’s a little village harvesting wood and farming, not to mention acting as companions to the ruler and copying whatever job it is you’re doing.  Building a blacksmith out of fifteen wood is a lot easier when there are three people carrying things at once, or even better two people to load the pack mule so you don’t have to keep walking back to the forest. 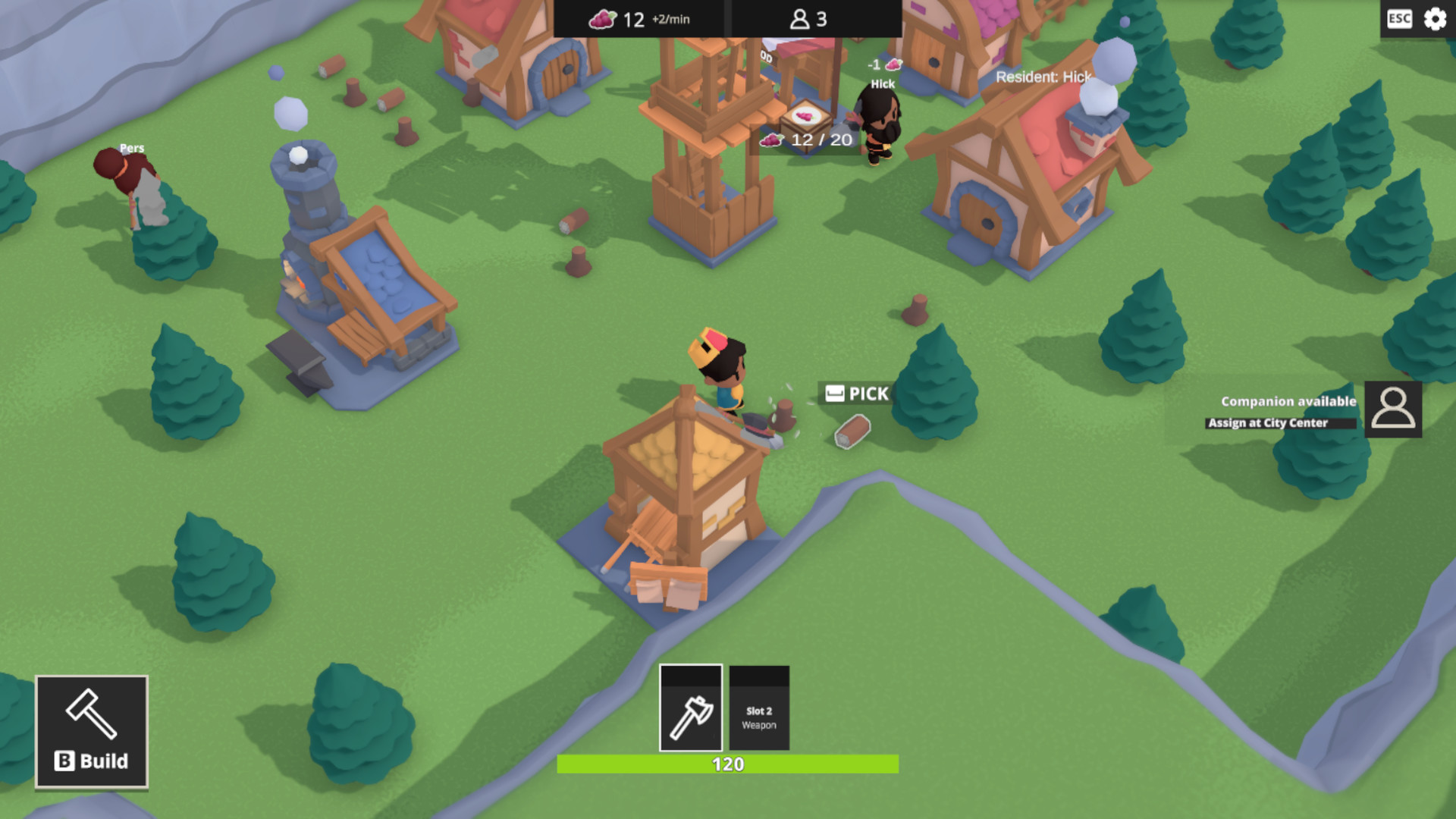 And then night falls and monsters attack, so a blacksmith is needed to make swords.  Exploring the world opens up stone as a resource, and while it wasn’t available in the Next Fest demo, the Early Access launch includes a multi-story dungeon.  More threats in the way of resources needs more people to handle them, not to mention the necessary work back at home base to keep a growing kingdom fully supplied.  For the bit I got to play it never felt overwhelming thanks to the systems being simple enough that I could just point a villager or two at a task and not worry about it any more, and it helps that the entire game is cute and super-likeable.

The current state of Kingdom Builders is still early, though, with only two of its planned six areas complete.  The developers are clear on how they plan to expand the game, with a roadmap on the web site and plans to listen to their players if it turns out that certain features need to be moved around in the schedule.  Even so, cute as it is, the game is notably light on content at the moment.  There’s a great foundation to build from and I’m very much looking forward to seeing how Kingdom Builders develops, but even with the twenty-level dungeon it won’t take a whole lot of hours to clear.  On the plus side it released cheap, with plans to bump up the price over the course of Early Access as the content eventually grows to justify it.  For now, though, Kingdom Builders is a great little action-builder loaded with potential, and with a little luck and a ton of work seems like it shouldn’t have any trouble growing into its promise.