Explaining Amplitude to someone who hasn’t played the original title on PlayStation 2 is a lot like describing a UFO abduction. It almost always starts with, “this is gonna sound crazy, but…,” and ordinarily follows through on the absurdity in spades. That’s probably why it didn’t do so well commercially, and outside its circle of diehard spaceship-music-junkies, few gamers have heard of — let alone played — Amplitude. It is, however, the game that solidified Harmonix’ rank among the rhythm-genre juggernauts. And since its release (only a handful of years following their 1995 formation), music has been the company’s stock and trade.

The music genre, along with most other slices of gaming, has evolved beyond those colorful button prompts, however. And plastic instruments, once heralded as the revolutionary answer to boring controller inputs, were tossed aside for more significant alternatives. While Harmonix’ once all-powerful Rock Band series faltered, some less-conventional (but amazingly fun) directions were taken by the company, most recently with the release of Disney Fantasia: Music Evolved.

Amplitude, though, is of a different breed of innovation. It doesn’t pitch too many new ideas, or even improve much on the solid foundation of its forbears. Instead, it creatively injects technology in all the right spots, keeping all of its beloved roots intact: the neon colors flushing a screenfull of increasingly tricky notes, speakers blasting catchy (mostly original) tunes, and an addictive vibration that’s as hard to shake as it is master. It’s a work of passion, not necessity, and it shows even within the trappings of the pre-alpha, crash-prone gameplay. 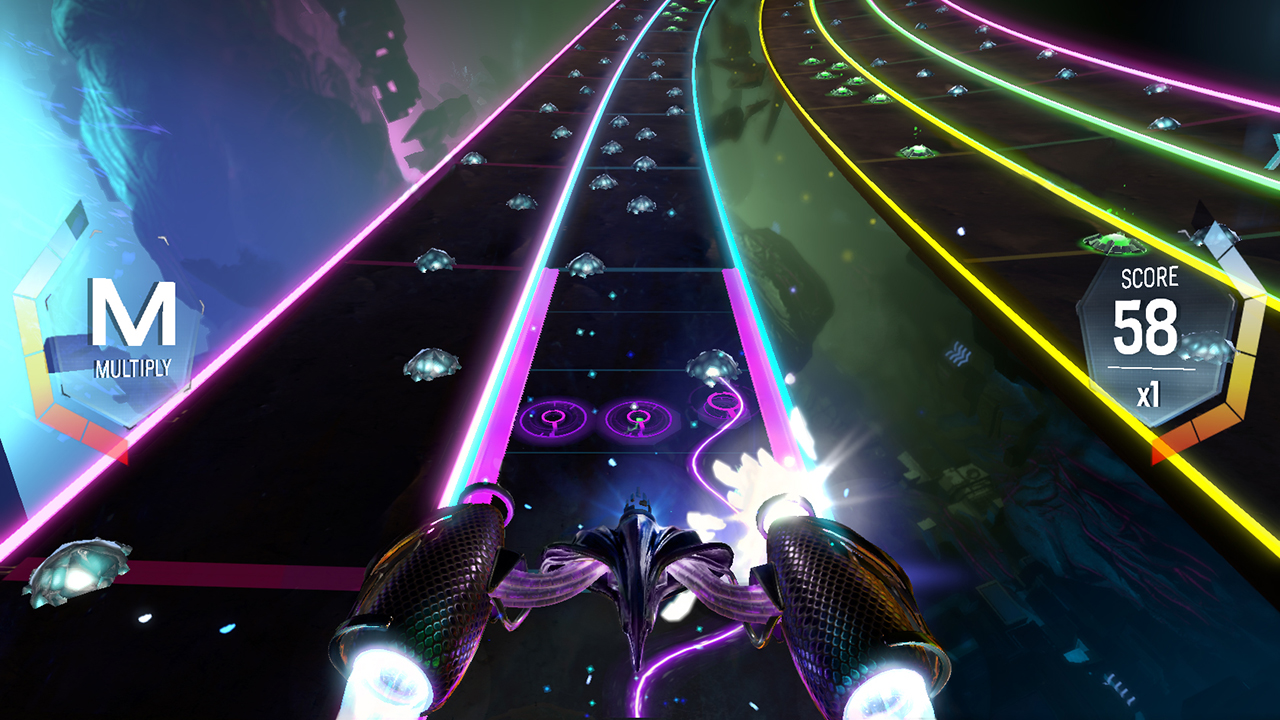 This time around, Amplitude has a story: an insane, incredibly vague and damn-near joey story, but it’s there and it provides some hilarious substance to an otherwise purely arcade experience. You’re a scientist that, through advancements in nanotechnology, enters the mind of another scientist. Sounds weird, right? Well, exposition isn’t high on the boards at Harmonix; music is, and that’s something that was made abundantly clear at the Amplitude both. “We focused on an original soundtrack that tells a story, like a concept-record, without any cut-scenes or dialogue,” said Nick Chester, the company’s “Mostly PR” guy. “The licensed tracks are great, but most of the tunes were written in-house by the talented folks at Harmonix, and that’s how the narrative comes through.”

The satisfaction of nailing a particularly tricky bunch of prompts, though, is unmatched. And that’s probably because difficulty, like every other aspect of Amplitude, hasn’t been compromised. If you remember tossing your controller at your little sister in frustration because a beautiful buildup was interfered by her humming of the Little Bear theme song, get ready for some wartime flashbacks. Amplitude won’t hold your hand, and harder difficulties (while possible, as I watched an enthusiastic fan shock every show-goer within earshot with his nonhuman abilities) will bring tears of joy (or frustration) to your eyes. 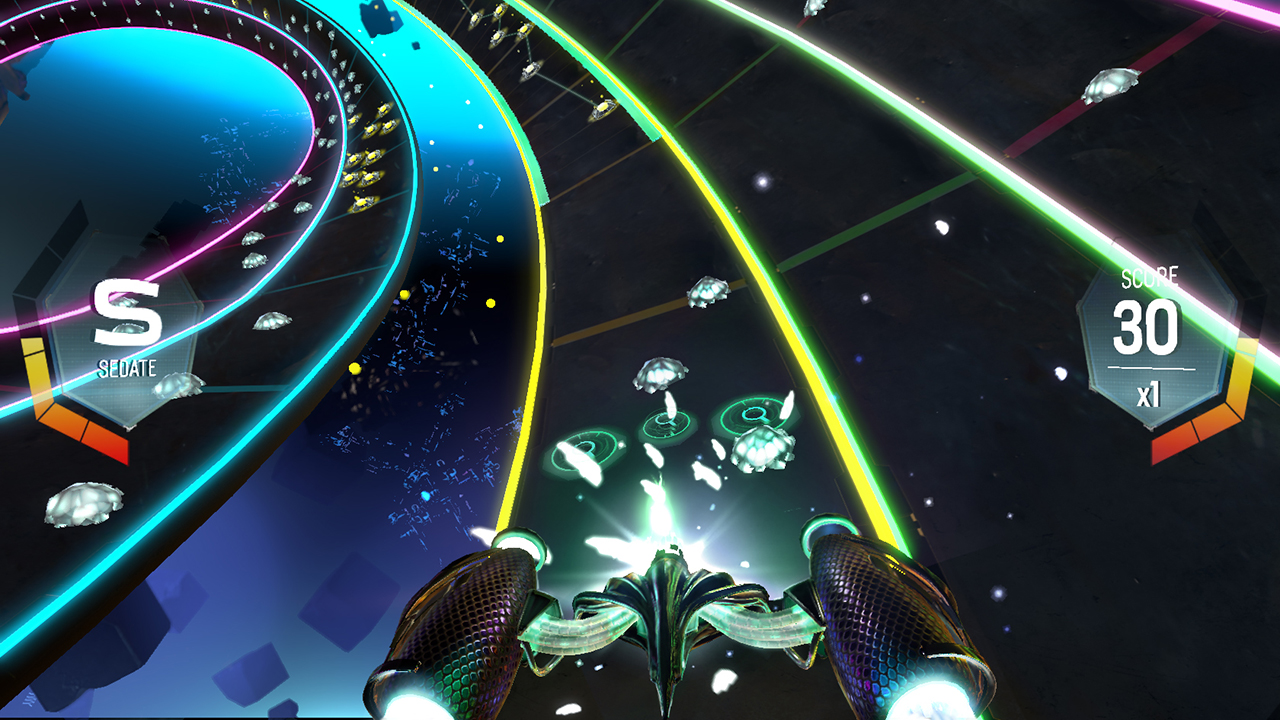 Although the aural experience is at the core of Harmonix’ reboot, visuals play as big a part in the mix. The brightly lit tracks, vivid explosions and laser-beam combos compliment every crescendo, sending waves of optical wonder through every perfectly-executed soundpiece. And while the unfinished menus, incomplete lighting work and limited animations made for a somewhat-depleted joyride, Amplitude ran fantastically and was easily one of the sexiest games at PlayStation Experience — pre-alpha and everything. That’s why I was psyched to jump behind the controller and give Amplitude a run for its rhythm. Sadly, my documentation of its awesomeness was harshly limited by my complete and embarrassing lack of skill.

When I wasn’t missing prompts and cracking awkward smiles at passersbys it was a blast, though, and features heart-pounding music that made my entire body gyrate like a drunk calypso background dancer — something that, regrettably, gathered a small crowd of chuckling onlookers. Even on easy-mode, every second was thrilling, and listening as each series of increasingly difficult notes added body to the tune was incredible. With the return of 4-player multiplayer (which was also playable, and looked equally fantastic), Amplitude is shaping up to be more than a return to a classic. It’s a love letter to fans from Harmonix, and it’s become one of my most anticipated titles of 2015.