Sometimes the best tidbits in a game like Cris Tales can be found in the smaller-scale efforts. Casually strolling in between town hubs, dungeons and connecting routes alike — all the while the trinity of past, present and future surroundings remain equally fixed on-screen — it’s comforting to see that a game like this is making the effort to not just equal its major, time-hopping gimmick, but in parts is acting to almost take the reigns completely. Granted, it’s hard to ignore the slanted, diagonal lines that serve to border off each time period, yet concerning one’s self over the dominance of a unique selling point needn’t mean you can’t spend just-as-dedicated a time to everything going on around it.

An old-aged NPC in the past whom, sadly and for obvious reason, is nowhere to be seen in the same spot during the present. Tiny slithers of geometry serving as little more than passing, textural decoration, having blossomed in a future time. The tiny cracks on a dilapidated building in the future, having started out as mere framework in the past. And strangest of all, the lower region of a town you can so freely move about in during the present, oddly submerged underwater due to some unforeseen future event that hasn’t yet taken root. It’s a passing, maybe fleeting, feeling to embrace; the visual serves little mechanically and no matter where you guide main protagonist Crisbell, her presence is always in the present time. The past and future are after all little more than windows into what-ifs whose only gameplay purpose is by way of hopping back and forth through the divides. Finding the required quest item or vital piece of information, so as to rewrite time and absolve some NPC’s fated present/future from such an implied turn of events. 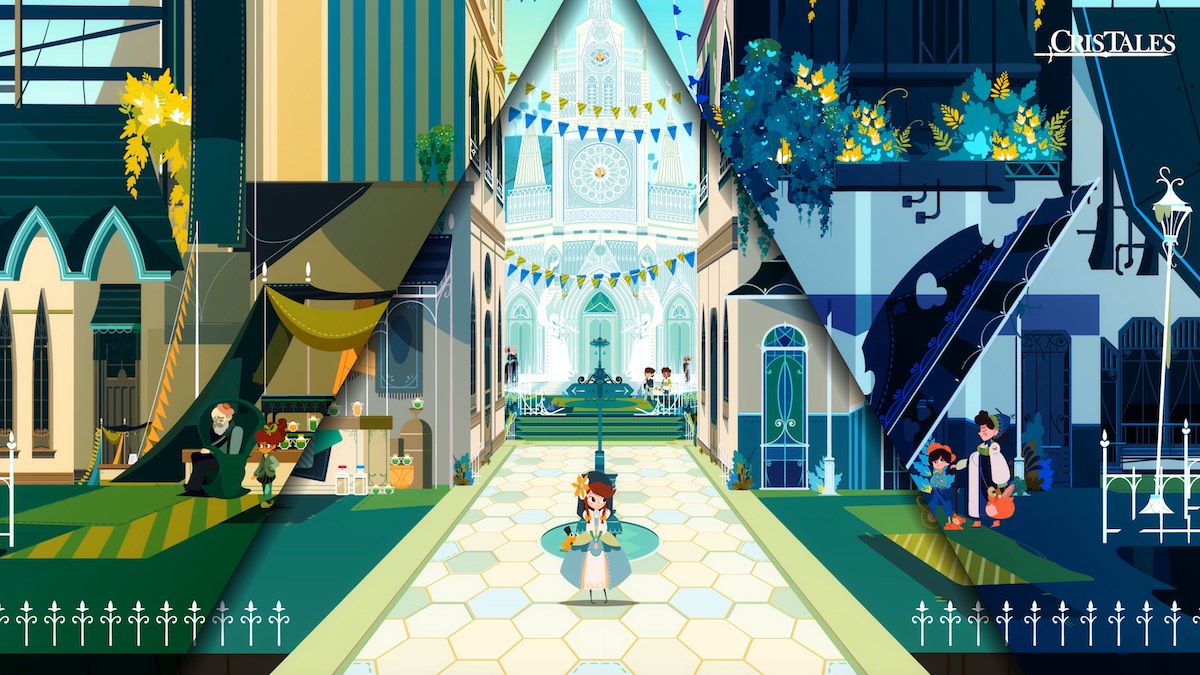 Structurally, so far as its main and side quests alike are concerned, Cris Tales happily confides in a template we’re all accustomed to. Go here, talk to someone, retrace one’s steps so that you arrive back at your original point and voila, you’ve triggered the next vital cutscene. The complexity, or lack thereof, in your investigative work isn’t the pull here though some may point to Cris Tales as a game all about appearance and little more. Its aesthetic alone is out-and-out gorgeous, though; each one of the screenshots on show here deserving of a second looking-over. The pull, however, is more in how the game presents one’s progression. How the perspective-based design of towns and hubs gracefully slide into view. How the literal split in space-time means the sharp, vibrant use of color isn’t some mindless indulgence. Past/present palettes of bright and glistening color, complimenting the future alternative of paler greens and blues.

You’re immediately reminded of a game like A Link to the Past because of it; another game whose visual interpretation of its parallel “Dark World” wasn’t some broad, cliched association with fantastical evil. Of bleak, drained tones — rather it was an interpretation on how evil may bleed into its colors. Water, for example, no longer refreshingly blue, but a foul green instead. Not exactly absolute in some black-and-white division on good versus evil, but one to suggest some changed, altered circumstance. That is how Cris Tales‘ take on the impact of time manifests. Objects, environments and indeed people may have [in]voluntarily adapted — on the surface, for better or worse — but is it the whole picture? Does a future where the palette is awash with bolder, brighter shades and takes a less conserved approach to the entire color spectrum imply a dire outcome? 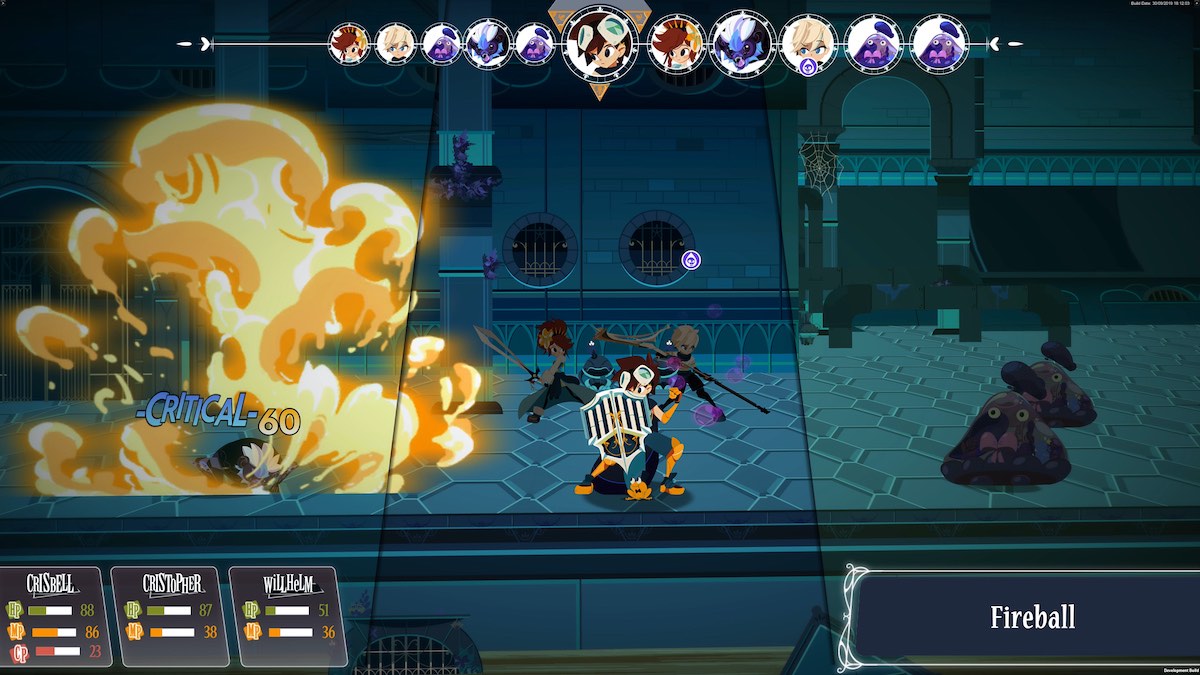 I could go on and on as to the visuals here — Cris Tales is a striking title and it’s one we’ve been fixed on for nearly a year now. Dismissive it may seem to treat character models as mere drag-and-drop shapes stacked atop one another, that’s not to say a voluntary closer look at the detail is in anyway bad. Yet for all the eye-catching color and modelling its aesthetic presents, the combat is where the real cunning of its time-manipulation comes into its own. Cleverly emblematic of the precariousness of that age-old question on the ability to manipulate time: I could, but should I though? It’s why the combat in Cris Tales is as interesting as it is. How one’s concerns on the integration of Crisbell’s abilities — of sending enemies into a past or future “state.” how this can unravel in the long-term — look to have been developed. Beyond simply “enemy gets younger/older.” Yes, the game keeps it vague as to whether an enemy thrust one way or the other, will be a boon or a hindrance. Yet that’s not where the appeal lies.

The appeal lies with the subtle puzzle-solving that ensues. Of working out the ideal route tucked away amidst the horde of foes and boss battles especially. You might think it unwise to cast an enemy into the future — increasing their strength as a result — but doing so may rid them of some vital buff they herald in the present. Better still, affecting certain attributes in the present may be the key to attacking in the future. And without spoiling the details as to another boss battle, what of that which has only gained its power in the present? The real joy of battle, though, is how that exploit manifests. Poison, for example, is perhaps the most well-known status ailment there is in RPGs, yet I ask you: what if you were to initiate that ailment in the past? Then, shall we say, skip forward several steps thereafter. Those small little lightbulb moments are the reason why Cris Tales‘ puzzle-like encounters are as interesting to work out. Past and future may be intentionally vague in how they impact an enemy’s build, yet it’s the little logical deductions those latter steps require — and the subversion on what are common RPG mechanics — where Cris Tales becomes more than just a game with good style and fair intentions, but a smart one on top. 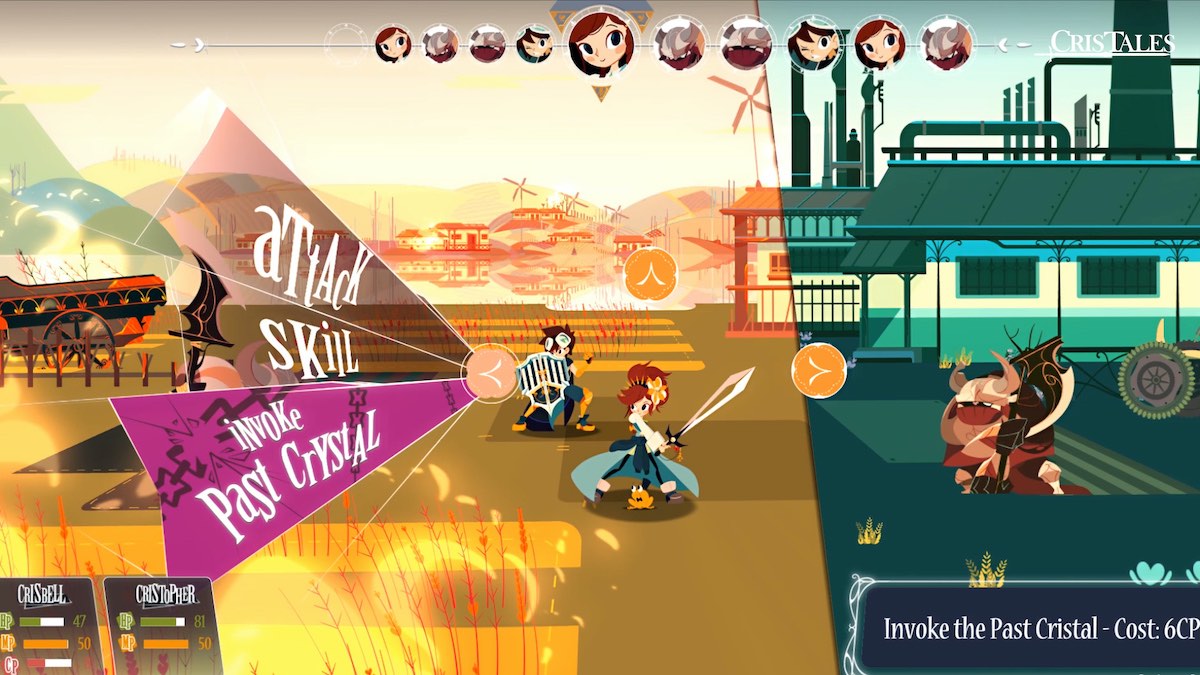 It’s no surprise the developers have pointed to games like Paper Mario, Bravely Default and Final Fantasy IV (VI doesn’t even get a mention here specifically) as their main sources of inspiration. And while that alone does make for a welcome change from the regular ’90s RPG golden-era suspects for easy name-drops, the examples offered do actually fit a similar modus operandi. Paper Mario‘s visuals and aesthetic charm is obvious, but with the others, the influence is more gameplay-orientated. Like Cris Tales, their appeasing of established, age-old traditions instead serves as a clever way to subvert the old way of thinking. With Final Fantasy IV, it was the introduction of the Active Time Battle system; with Bravely Default, it was the ability to store/borrow unused turns. And with Cris Tales, you may think its bold exterior starts and ends at its menus. Stylized fonts and a layout that looks like some explosion caught in a freeze-frame — one that’s sure to have people immediately, predictably, rushing to draw comparisons with a certain other JRPG known for such bombastic presentation. But it’s the act of deconstructing just what time-travel can bring to battle — wherein enemies are at its mercy — where Cris Tales is at its most engaging.

Another spot of notable positivity is the way regular battles serve to get the player better accustomed to its many moving parts. Not unlike a game in the Trails of Cold Steel sub-series — whose own larger enemies and end-of-chapter boss battles felt in part like a ruthless testing of one’s knowledge — even if it’s not as complex or reliant on positioning or party synchronicity alike. Battles are still static affairs with enemies attacking both from the left and the right. There’s a party of characters to keep alive of course, but Cris Tales relies instead on its players’ faith on a route to be discovered. To work out the right attack by the right character, during the right time period. And it’s only because the game leaves enough of a breadcrumb trail to suggest such a presence that the pitch here works so wonderfully. And why it’ll be intriguing to see where and how combat will mix things up further down the road. 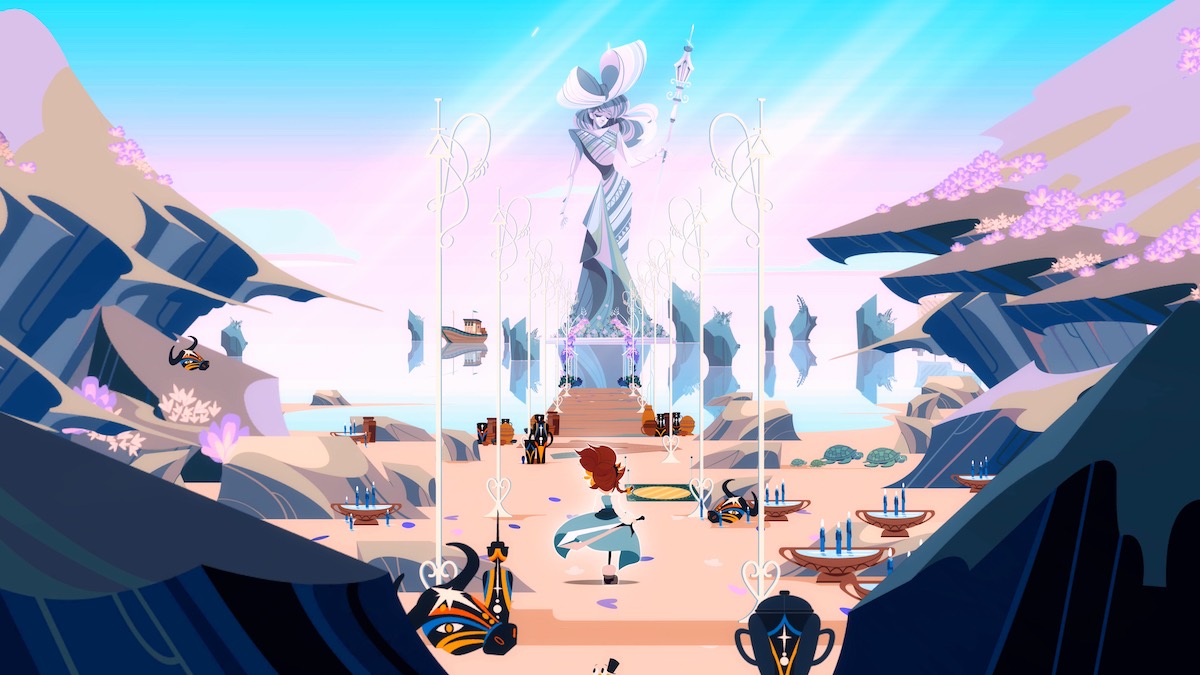 There are so many more flashes of justifiable promise one can go into greater detail over. From the implementation of player choice as to what the canonical future will entail, to the fact certain quests are said to span multiple kingdoms, to the very notion there are allegedly many visual variants to go along with said future results. But for all its time-manipulation, none may be more enticing than the story underpinning both the game and its main character. For the sake of time — and of the possibility I may in fact give away more than I’m at liberty to share — let’s just say that players may find some draw with the arc Crisbell and company appear to be heading on. That should perhaps highlight why Cris Tales not only struck a chord to begin with in 2019, but more than a year later, has resulted in this being a game I’m even more eager to see through.

For all its emphasis on time and of illustrating it simultaneously — of the rabbit hole of possibility this may accrue during combat — Cris Tales may, fittingly, have in another scenario sailed merrily on the likability of its main party and the strength of its story (or at least one hopes it’ll be a story worthy of highlighting). Just as it may succeed on the assembly of such small details in its visuals; something as minor as a button prompt mid-conversation actually being a 3D-like button getting pressed down, is such an insignificant yet welcome sight to see. So many elements clambering for attention and so very many pieces to appreciate, that’s perhaps as fitting a reason as to why Cris Tales has gone from an upcoming, eye-catching RPG, to potentially one of the best ways we can hope to cap off 2020. Cris Tales will be available for PS4, Xbox One, Switch & PC on November 17.