After putting out 312 games under the Assassin’s Creed moniker, Ubisoft decided to take 2016 off from the mainline series to reevaluate their approach to the franchise while giving fans the remastered Ezio collection and a movie to tide us over. We’re still a few weeks away from knowing how successful the development team was in rejuvenating the franchise but they do enjoy teasing us with little bits of information to whet our appetite. The latest batch of information we’ve been given focuses on the cinematic storytelling, the importance of leveling up and the truly impressive Discovery Tour, at least that is impressive for people who enjoy learning about real world history.

The Discovery Tour is the one that we will touch on first, since we have to wait the longest for it. It was actually announced last week, but for those who missed it this is where the developers have created a living interactive museum of Ancient Egypt. Players will be free to explore the game world and learn about various aspects of Egypt, from the construction of pyramids to the mummification process. Edutainment attempts have not always gone over well, and we won’t know for sure until this free update launches in 2018 but learning about history while exploring the Assassin’s Creed take on Egypt sounds like it will be a good time and maybe even school teachers can use it as a teaching aid without having to worry about editing out all the parts that make Assassin’s Creed games enjoyable.

Gaining levels is an important step in making progress in Assassin’s Creed Origins, which was a point proven by trying to take on several missions where Bayek was three to five levels lower than the recommended level for any mission. This does make a difference. The combat in Assassin’s Creed Origins is designed to make Bayek feel like a badass who doesn’t have to hide in the shadows, and when I played a different part of the demo where Bayek was more evenly leveled with his opponents going toe to toe was not a problem. When Bayek is level twelve and taking on a level seventeen guy with two level sixteen bodyguards that shadows might not even be enough to keep him safe. Like an inexperienced Batman who hasn’t yet designed a ready for crime fighting batsuit Bayek attempted to assassinate that high leveled man by diving from the rooftop. What was expected to be a killing blow resulted in taking his health bar down by about two thirds, so it was an impressive hit but not the desired effect. Like any survivor of an assassination attempt, he immediately attacked Bayek and with one hit knocked his health bar down to about one eighth. Dodging and blocking, he nimbly danced around his foe and his goons gradually chipping away at their health bars until one of them got bored and ended Bayek with an arrow. 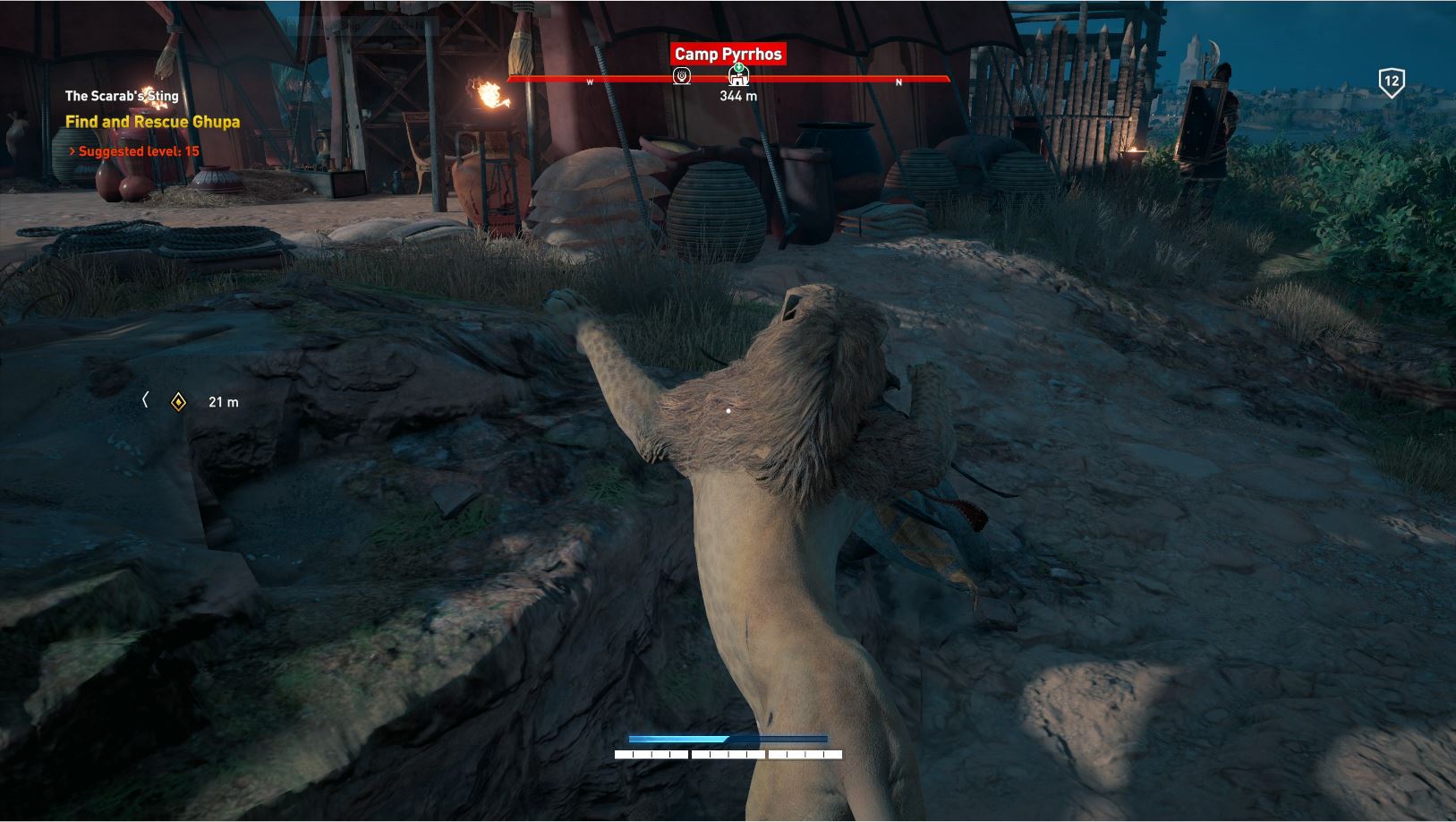 Taking on overpowered foes is not impossible but very difficult. When dealing with enemies that can kill you in two or three hits but can withstand a dozen finesse is crucial. Dancing around one enemy is a fun challenge of strategy and reflexes, but if a few of them surround Bayek things are pretty much going to end badly. Finding ways to partly cheese some fights in missions helps, and even though the game over screen was seen several times I was able to beat missions filled with level seventeen enemies at level fourteen. This involved things like throwing fire bombs and tumbling away or climbing up to very high places and emptying various quivers. None of this actually resulted in killing them, but it did soften them up enough where fighting them in honorable melee combat wasn’t quite as lopsided in their favor.

An obvious solution to this is send out the falcon to scout out missions that are more suited for the current level, so some side quest grinding and come back strong enough to battle but being at the disadvantage can lead to some interesting approaches to tackling a quest. There was one unfortunate chap that got locked up and poor Bayek had to rescue him, and as luck would have it he was in a cage in a place guarded by powerful enemies, so going in fighting was a bad idea and stealthily sneaking him out was going to be tricky. Luckily there were some caged lions and hyenas at this place so that gave me an idea. Unfortunately, those ungrateful fleabags attacked me after initially busting them out of their cages but they quickly turned their attention to the guards who came to investigate the commotion, allowing Bayek to pull off his intended jailbreak. 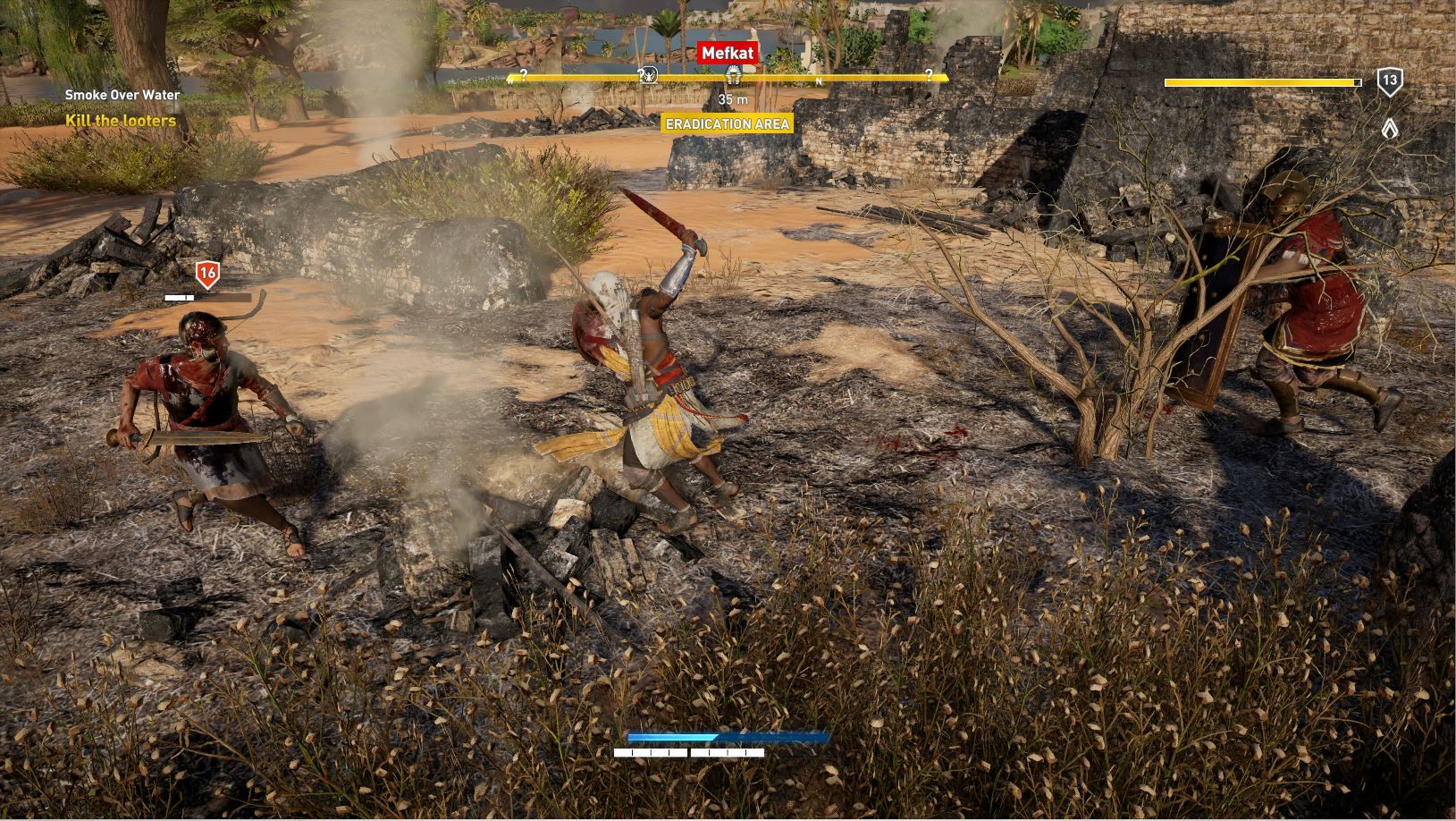 Having an involved plot is nothing new to Assassin’s Creed, and as to be expected there are plenty of cinematic cutscenes to advance things along. What is noteworthy are the snippets of the tale I have been privy to focus on Bayek and Aya as a loving couple, so even though Bayek is the main protagonist this may be as much Aya’s story as it is Bayek’s. To what degree Aya involves herself with the main plot we will have to wait and see but she and Bayek seem quite entwined with one another, and perhaps the last of the Medjay really is not such a lone wolf. What role Aya plays with Bayek’s story and how their story plays into the larger arc of what is going on in Egypt will be revealed soon, but from what has been shown so far is intriguing and the duo shows potential to become a great video game couple.