It’s safe to say that 2K and Visual Concepts missed an opportunity with WWE 2K20. All the development was bought in-house as the traditional developer Yukes bowed out on the franchise. The team elected to skip on this year’s “simulation” of the WWE and is going with an arcade title. Fans may remember WWE All-Stars from years ago as a welcome arcade title and 2K looks hopes that the new WWE Battlegrounds will be just as loved. Developed by Saber Interactive (NBA Playgrounds, World War Z), this social brawler party title will feature a loaded roster with over-the-top action. We were sent a hands-on early build of the game and it looks like to be that welcome change for fans.

WWE Battlegrounds features the same type of animated and action figure-like art design that was seen in WWE All-Stars. These WWE Superstars are a bit more of a caricature with some bigger head shapes as opposed to the body. Unlike All-Stars, the roster will be loaded. Players can expect over seventy WWE Superstars including Legends with the ability to create wrestlers and even create arenas known as Battlegrounds. There are both male and female WWE Superstars and the preview build featured about a dozen.

What’s maybe the most important aspect of WWE Battlegrounds is its simplicity. Being able to pick up and not only play with friends either on the couch or online but also compete is a huge aspect to the game. The WWE 2K series has long been complicated to do some more of the advanced moves that are seen in the actual ring. Battlegrounds keeps the move sets simple, but not boring. Each Superstar has three Power-ups to use at their disposal once a meter is full. This can be fire hands, health regeneration or automatic blocks. Counters are pulled off with either the right bumper or a quick time event press. Each Superstar will share the same type of moves, so they won’t have their own individual move set. This is dictated by the different classes. Each Superstar will be categorized as Powerhouse, High-Flyer, Technician, Brawler and All-Arounder. This allows for a consistent play-style with a bit of variation across the board. 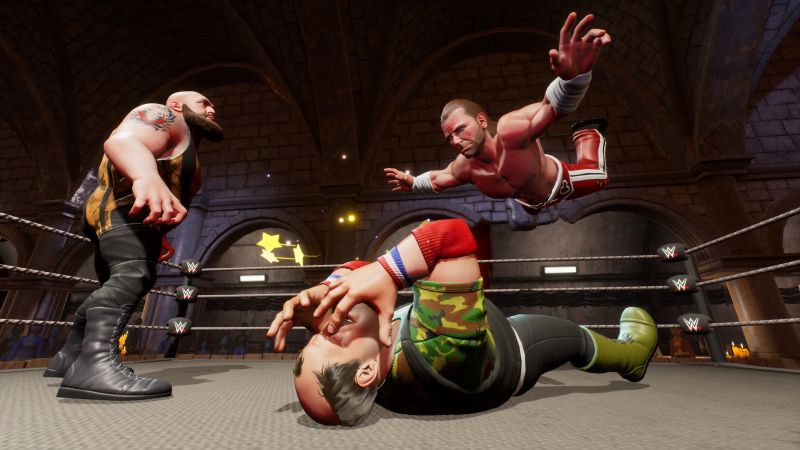 Having a chance to play as John Cena, The Rock, The Fiend and Asuka in a couple of matches proved to focus on fun. The two match types offered in the build were a fatal four-way and a 2v2 cage match. Battlegrounds will feature a plethora of matches including triple threats, Royal Rumble and more. Up to four players can compete locally or online, but the King of the Battleground will feature up to eight players online. This is an ongoing fatal four way as players will matchmake into the mode and four players will stay on the outside. The idea is to stay in as long as possible and throw opponents out. Multiplayer Tournaments will also be included and these will be multi-round and time-exclusive that will be online only. Players will receive rewards for the more wins the accumulate.

Expanding more on the move sets, these are executed with a simple button press. Special moves are available and are mapped to either the right stick or the left bumper. Finishers, once the meter is built up, are tied to both triggers. The pacing in the preview build of the matches felt perfect. It was fast paced and responsive. Weapons can easily be picked up and used and some arenas have interactive weapons such as the alligator in the swamp arena. Suplexes and other moves are shown off with a color and players can also execute simple combos. It feels much more cohesive due to the simplicity than the WWE 2K titles. There’s also a Crowd Bar that helps earn points to help swing a match based on how the crowd reacts. The crowd will call out for moves to be executed. This is another cool mechanic that could be translated to the main series since the crowd makes or breaks not only matches, but Superstars in real life. 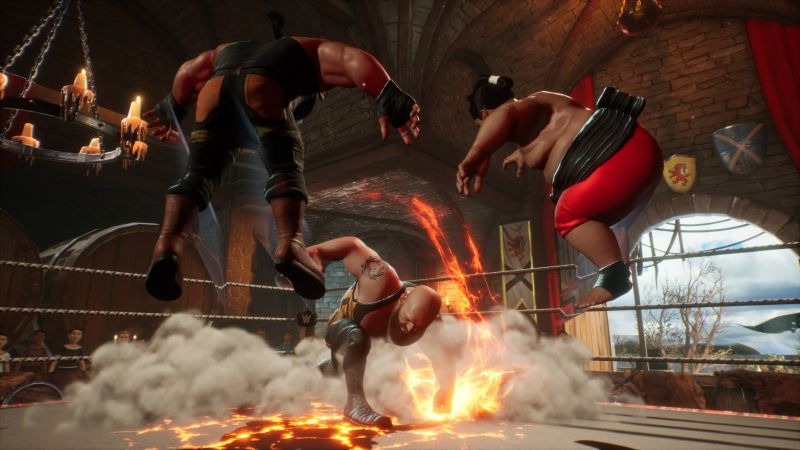 While the WWE 2K series can have an overwhelming amount of options, 2K and Saber Interactive will offer a simpler solution with some depth. WWE Battlegrounds seems to have quite a bit of options to play and keep players invested. On top of this, the Standard Edition is only $39.99 with the Deluxe Edition coming in at $49.99. It will launch on PlayStation 4, Xbox One, PC, Nintendo Switch and Google Stadia on September 18.