Is there room for another arcade twin-stick shooter in the world? Well, that depends on whether we’ve got ∞+1 available yet. So far the answer is “No”, so having another one show up to apply its own distinct take on the genre is always welcome. BitFrenzy is a simple shooter with complicated enemies and its early-alpha release on itch.io is free to all and ready to eviscerate any who load it up unprepared.

Like any arena shooter worth its salt, the basic premise is all but nonexistent- you’re in the middle of a level and enemies want you dead. You should probably shoot the ones you can and avoid the ones you can’t if you want to live, but don’t let me tell you what to do. Life’s too short for rules, and that’s especially true in BitFrenzy when a round can last 15 seconds.  The pressure ramps up fast as enemies aren’t shy about appearing in the level in large numbers, and they take a few hits to go down even in their basic forms. 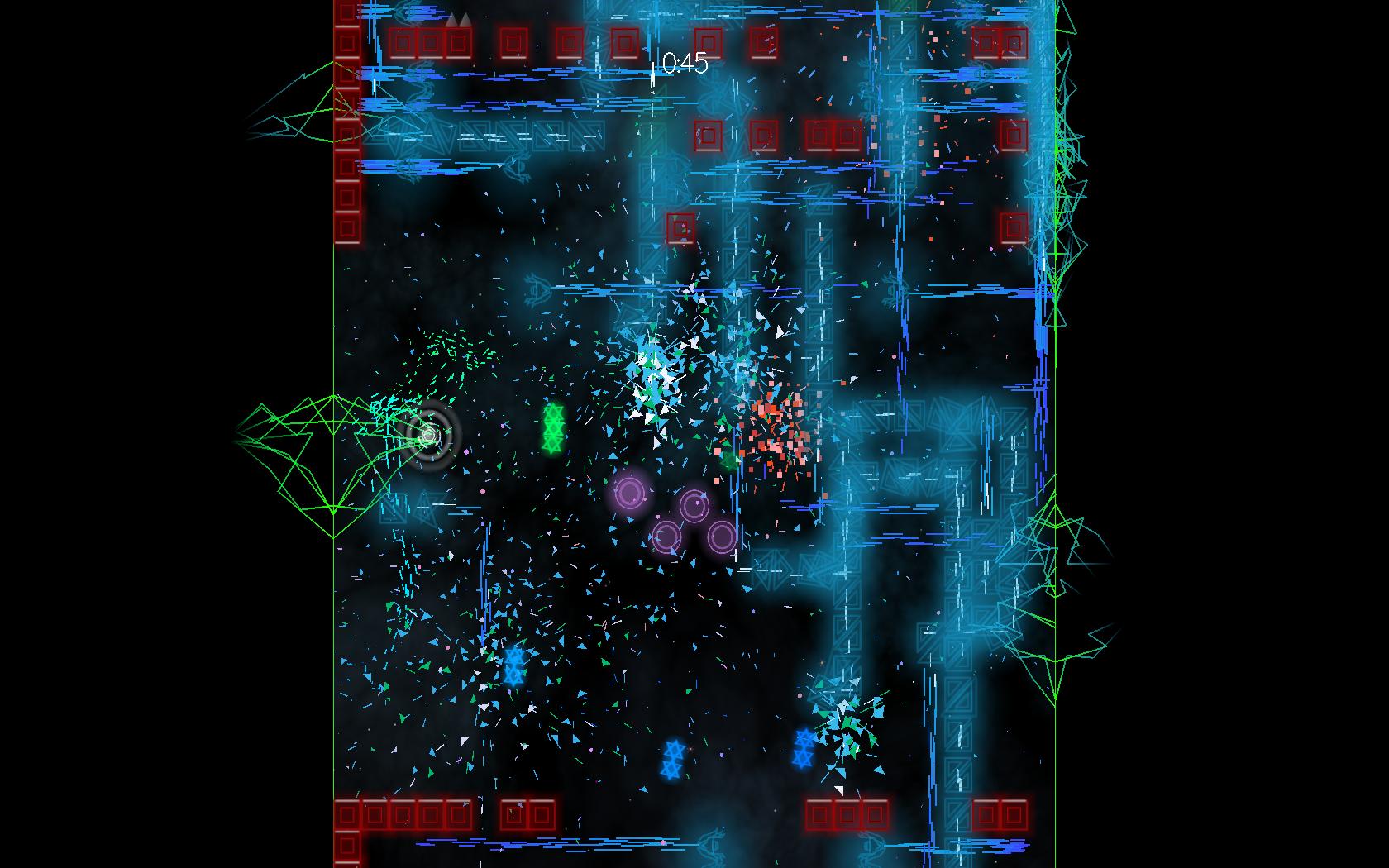 That wouldn’t be much of a problem except enemies can combine, mutating into new forms as they merge to form a creature with the traits of each. Little swarms of triangles are easily dispatched, but they make the circles far tougher when they merge into a spiked ball of pain. The green square-worms fuse with the blue guys who travel in a straight line leaving a deadly trail behind them, creating an ultra-wide barrier criss-crossing the screen.  Or the blue travelers can fuse with a red wall block to create an enemy that travels around the block in a circle, attached to its center by a line you, of course, can’t fly through.  There are enough weird enemy combinations that one of the menu options is a Mutation Log, with 48 spots available and not actually listing the base enemies.

Thankfully, the ship is far from defenseless. The main shot has limited range but a good spread, and you also get a secondary gun that fires a straight shot with unlimited range shooting out at the end of the sparkly tail you leave as you move. It adds an interesting strategy where sometimes it’s better to stay still rather than move, because while the tail will shrink to nothing after a second that’s still a full second of divided firepower. On the other hand, brief moments of creeping ahead makes for a far wider area of cover than you’d otherwise get, so movement becomes a balance between concentrating the attack and spreading it out, or running like mad and letting the tailgun go where it will. Another unique function is a static boost surrounding the play-field, effecting both player and enemy alike. As you get close to the edge of the screen lightning jumps between to the between it and whatever’s nearby, giving it a nice speed boost. 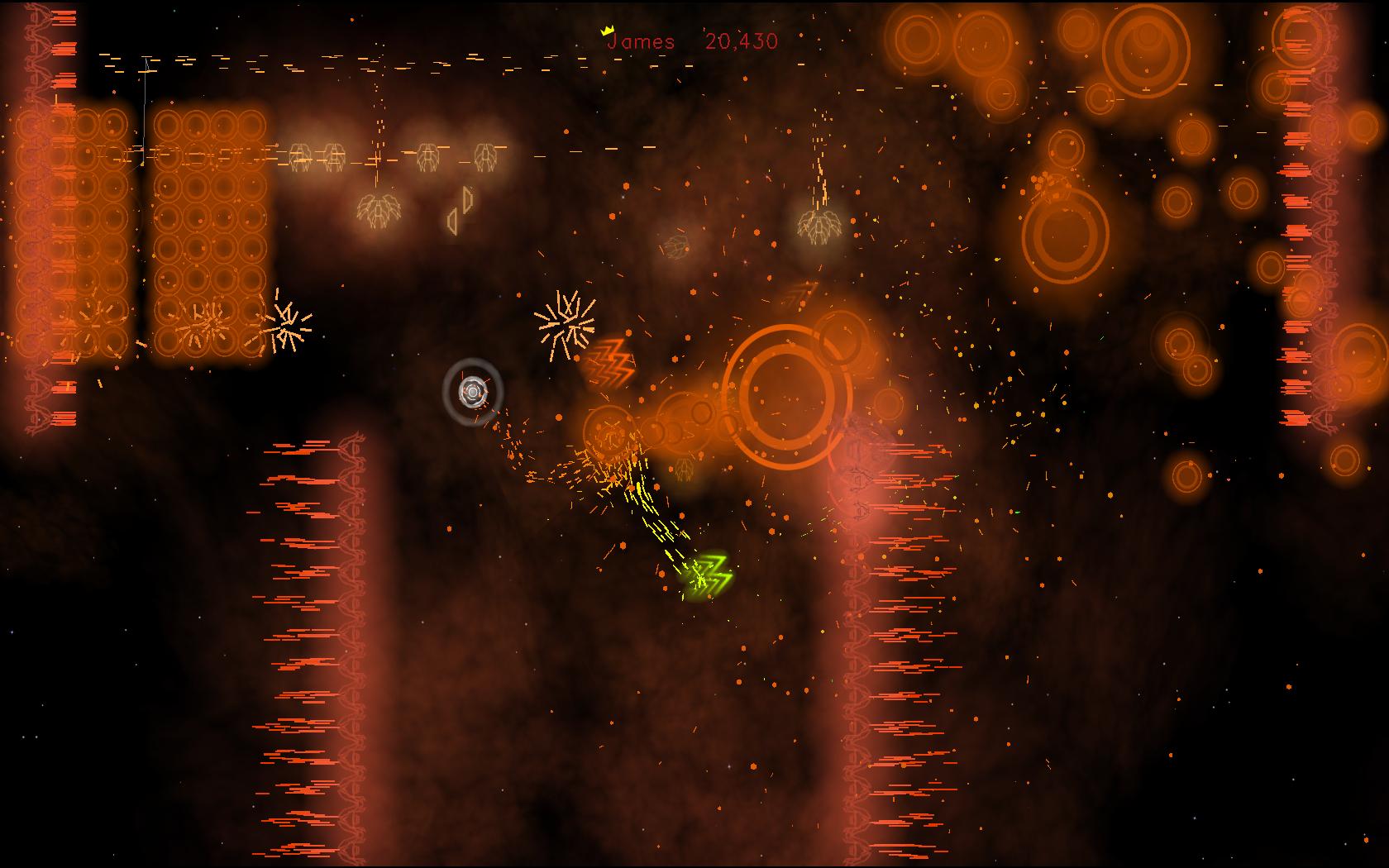 Like Geometry Wars’ later incarnation and Waves, BitFrenzy is divided up into differing modes with wildly varying objectives and enemy behaviors. Tumbler is a small arena that fills up rapidly with a predetermined series of enemy waves, requiring the player to bounce around like a sock in a dryer. Sultan’s Court puts the player in a maze of the red block-walls while sentry-eyes shoot out square beams that slow you down and enemies, of course, can pass through the walls without problem. 60 Seconds is a single minute of quickly-intensifying arena shooting, with enemies showing up in semi-constructed waves that rapidly see you carving out a safe space while hoping the sections of the arena you can’t see aren’t mutating enemies into anything too dangerous. There are three modes open at game start, with others unlocking as you place on the leaderboards, but you can also hop into the options and open up everything but the last one if you lack the shooter-god skills necessary to get even last place. As a first alpha release, BitFrenzy needs balancing, and the game progression is aware of this.

One of the defining features of BitFrenzy is that it’s hard.  As in crazy-hard.  My first ten games working on the Tumbler mode lasted 15 seconds apiece or less, and I’m still fairly sure I haven’t survived a full minute on any mode other than, maybe, the wide-open free-for-all arena of Trials and Tribulations.  Enemies spawn fast, take several bullets to eliminate, and are utterly merciless in their ability to zone you to a guaranteed death if you don’t plan ahead.  There’s only one life per game, but after dying the level moves on without you for a second or two before instantly restarting, throwing you back into the fight with just enough of a breather to get re-oriented.  It’s fairly easy to sit back and let BitFrenzy pull you from one attempt to another, and if the level doesn’t even last 30 seconds then that just makes playing several rounds in a row that much simpler. 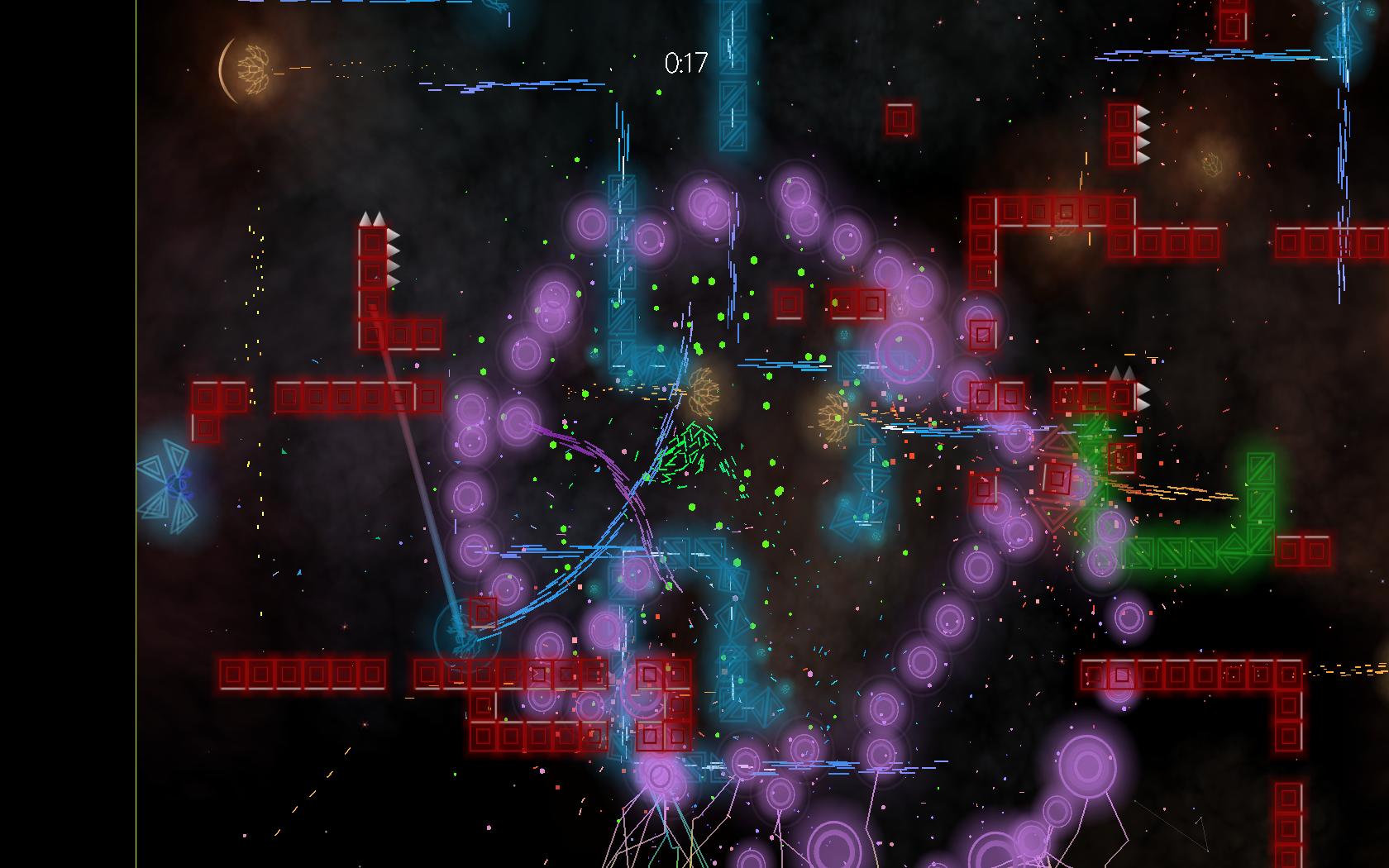 BitFrenzy is in alpha and has some rough edges, but its basic gameplay hooks and modes are well designed.  While it bears an immediate resemblance to its obvious Geometry Wars influence, the mutating enemies and dual firing method give it its own set of tactics and strategies.  It could use a kinder default leaderboard, because otherwise unlocking even one bonus mode (much less the mysterious last one, which requires first place on all other modes) would take hours of laser-focused practice, but once you’ve opened them up in the options menu there’s a lot of creativity in the different types.  BitFrenzy is a frenzied neon twin-stick death machine, but not an unfair one.  With practice and skill it starts to open up its secrets, and previously unattainable goals become possible.  It may be a concentrated dose of player-annihilating brutality, but deep down in its stony glowing heart, it’s a fair one.

The BitFrenzy alpha is available for free over at itch.io.  Head on over and grab it while the getting is good.