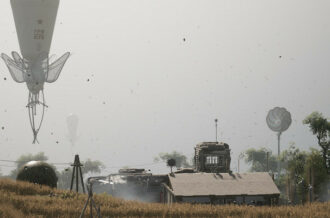 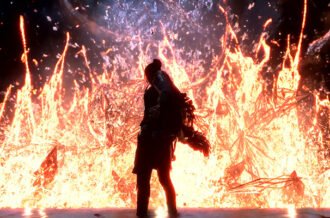 The thing about factory games is that it doesn’t matter what they build.  I mean sure, there’s a certain amount of satisfaction in the classic “ore to rod/plate to industrialized machinery” cycle, with each new creation being a stepping stone to the next, but the important part is building a machine that’s as massively complicated as it is efficient.  Shapez-io has launched on itch.io (with free web demo) and is hitting Early Access on Steam later this week, and it’s a factory game every bit as much about building stuff as it is about stripping the genre down to its basics.

At the beginning you’ve got extractors, conveyor belts and a repository to send the results to.  Mine enough circles and it unlocks splitters, which divide the circle in two when you send them through.  Problem is, splitting isn’t all that quick but the reward for meeting the quota on this mission is a belt divider/merger, which lets you more efficiently use the resources pulled from each extractor.  Every machine and piece is free, so you can divide, process and re-merge to your heart’s content, and the challenge comes from the volume of resources required to clear each level.  You can “win” by setting up a single line and walking off for a couple hours, sure, but where’s the fun in that when you could make a massive tangled rats-nest of belts and processing units instead?  So long as the end product gets to the central input area it doesn’t really matter how it gets there, so a big part of the fun is playing with design. 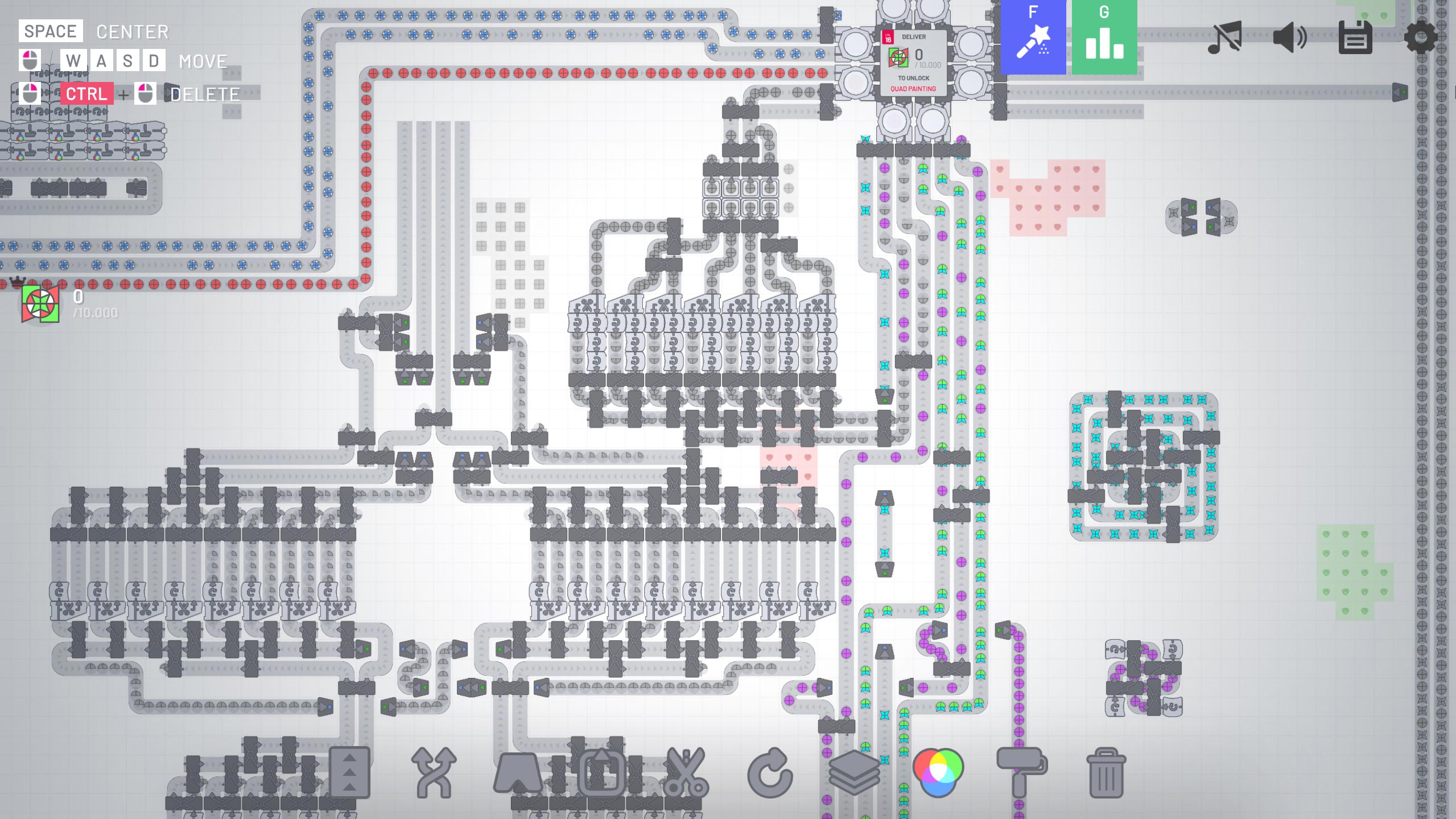 As the game opens up it doesn’t seem like it’s going to get overly intricate in terms of its tool-set, but you can still do a lot with what’s there.  Shapes can be divided down to quarter-pieces, colored, stacked and reassembled whatever way you’d like, and the initial slow pace of the machinery is upgradeable so long as you deliver the required parts.  Each new goal picks up where the last left off, so your production lines are still available to either be torn down to make way for the next set of requirements or left running to pay for a new upgrade, depending on need.  The map extends in all directions, close enough to forever to make no difference, covered in so many patches of shapes and colors there’s no reason not to build over one if your design needs the space.  In all the world, though, there’s only one delivery area, but by the time you need to build too far out you’ll have gotten much faster conveyor belts so it all works out the same.

While Shapez-io is off to a nice minimalist start, it’s worth noting that it’s pre-early access and missing some important quality of life features.  Managing conveyor belts in close quarters can be a pain as they attach to each other in unintended ways, for example, and a giant complicated machine can only be duplicated by rebuilding it part by part.  Need to tweak the placement of part of an assembly?  Delete/rebuild is currently the only option.  On the plus side, the entire game feels solid and impressively bug-free, or at least I’ve run across no technical issues at all yet. 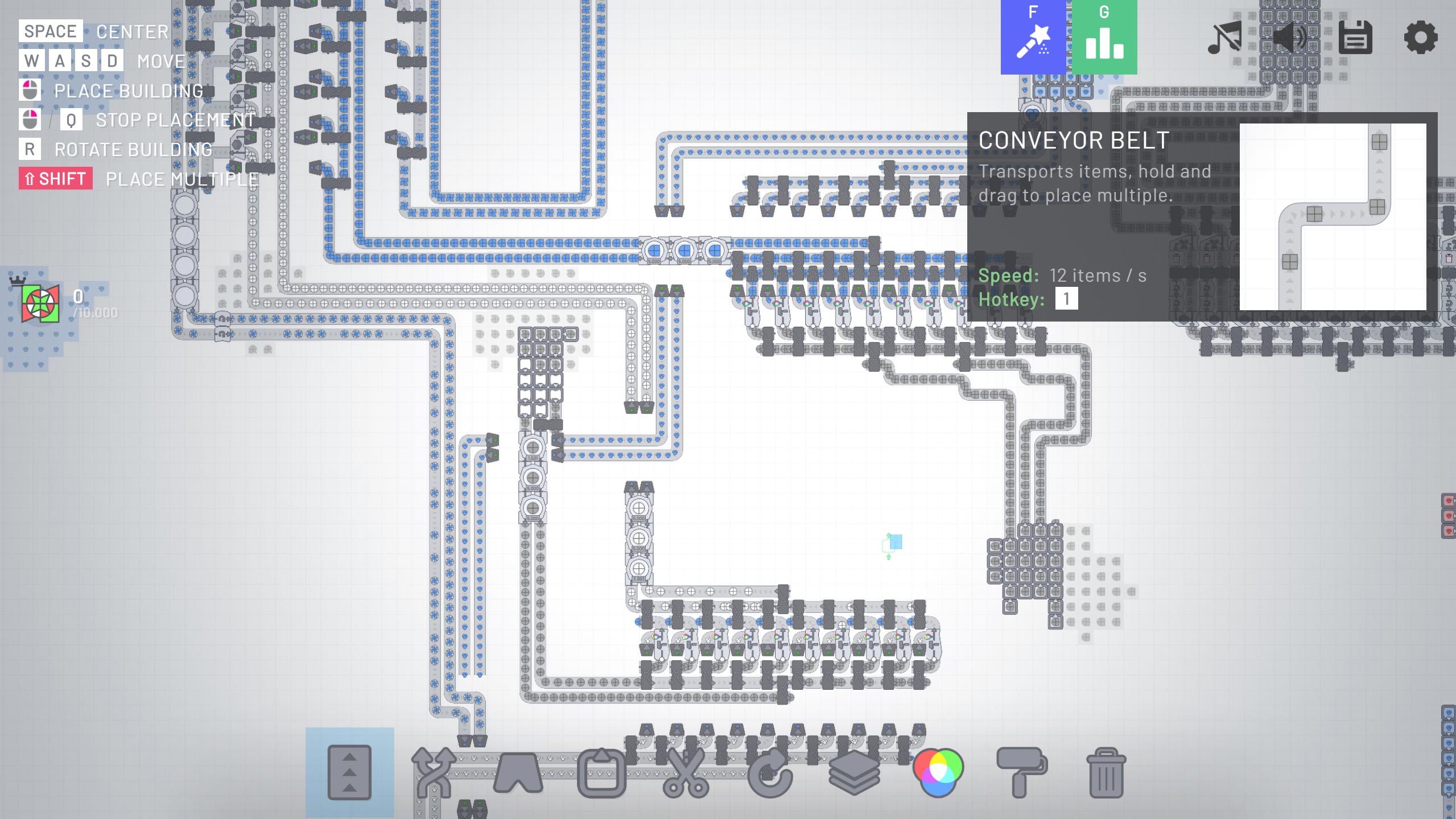 Shapez-io makes a great first impression, simplifying the factory genre but doing a lot with the pieces it keeps.  One of the great feelings of factory gaming is having a rough idea of how a process might work and then testing, refining, tearing apart and rebuilding until everything works right, and when done having created a massive beast of a contraption that seems like it’s far too complicated for its own good, and yet each part makes sense because you built it yourself and you can see all the bits working in unison and debug the parts that could use a tweak.  Shapez-io scratches that itch nicely, and with plenty of additions and upgrades to go on its path to completion, the machines have room to get even more intricate.