The SteamWorld has gone through a lot over the years, including getting blown up at the end of SteamWorld Dig 2.  This would count as a spoiler except the previous game, SteamWorld Heist, took place in the shattered remnants of the former planet.  The steam-powered robots are nothing if not resilient and adaptable, which probably helps explain why each new game is a different genre.  The Dig games are mining-platformers, Heist was side-view turn-based strategy shootouts, Quest a turn-based RPG/deckbuilder, etc.  Now the newest entry in the series is available in demo form and it’s as different from the others as could be expected.  SteamWorld Build is a combination town-builder and mining game, which is a combination that sounds odd on the surface, but somehow clicks once the demo gets rolling.

The kindly, trusting prospector Jack and his daughter Astrid Clutchsprocket have found the friendly and not-at-all menacing AI Core, who’s nothing more than a few wires sticking out of a purple-eyed sphere.  Core can’t do much of anything in its current state but with the kindhearted help of good robots everywhere that shouldn’t be too much of a problem.  Somewhere deep underneath the desert are the broken remains of ancient technology that can lift the robots away from their crumbling planet and into space, and if that takes the monumental efforts of an entire town of robots, then everyone will just have to work together to make it happen.  The old western-style town supports a mine and the mine supports the town, and while the two play differently from each other, they each make the other work. 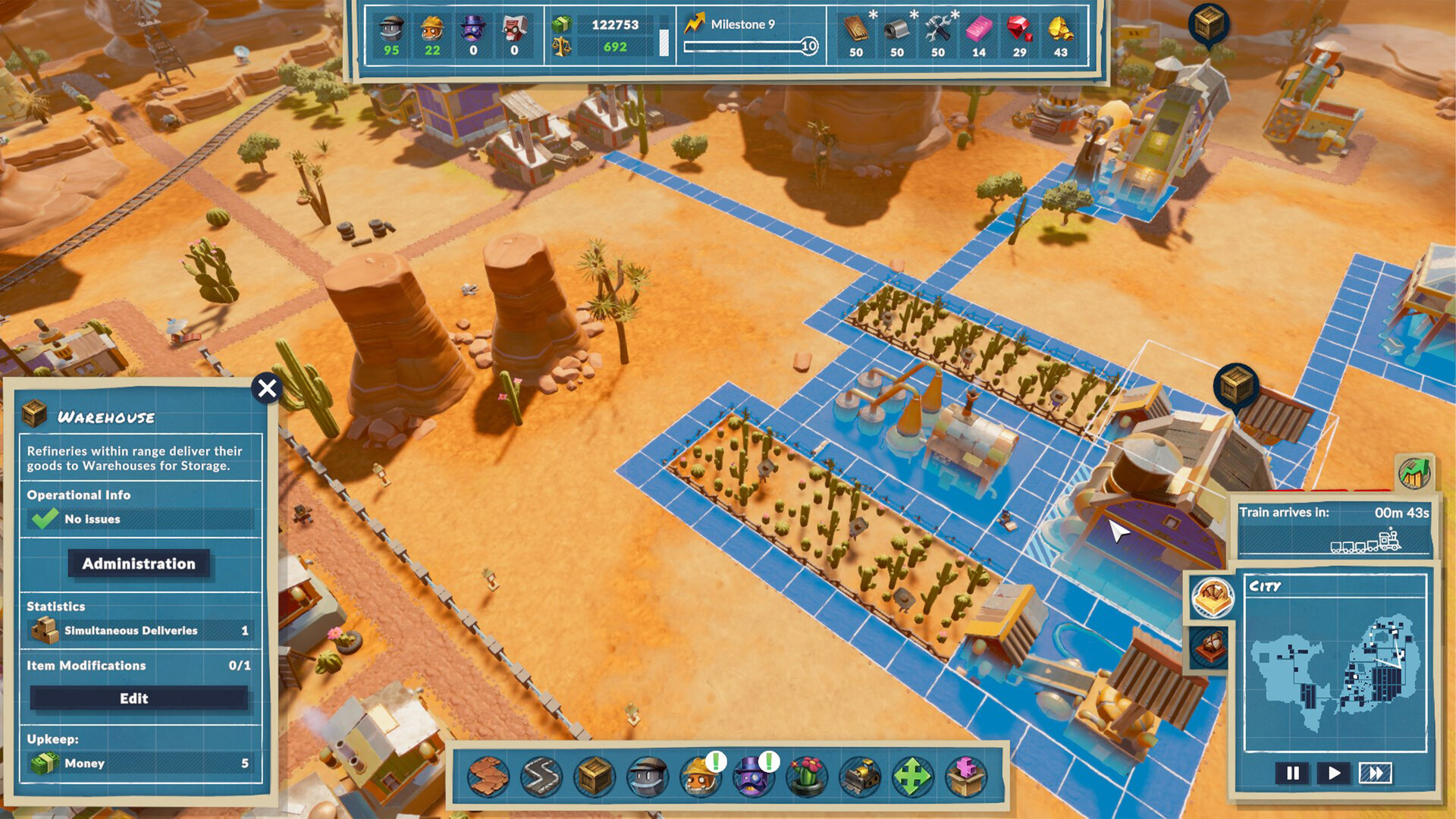 The demo for SteamWorld Build is the intro to the game, starting from an empty patch of desert and ending with the excavation of the first of six techno-relics.  Jack and Astrid lead the wagon train to a a mostly-barren stretch of sand and cactus, with the only notable features being the train station and mining shaft, both broken and unusable.  It’s not like robots need all that much and they did come packing supplies, so the first thing is to set down some worker houses plus a general store and maintenance shop.  Nothing works without roads so some dirt paths connect everything, and while you can choose to make the town ultra-condensed even at the beginning, there are a good number of decorative items that make it tempting to leave a few squares free for a cactus, wheelbarrow or signpost on the grid-based map.  After housing is down the basics of industry need to be addressed so a forester goes near one of the few strands of trees, a lumber mill cuts the wood down to size and the warehouse to stores everything.

With the town off to a good start it’s time for its citizens to get an upgrade, promoting workers to engineers.  Engineers have different needs, such as moonshine and the local bar, and the amenities need to be within travel distance of their homes, so minor planning comes into effect to make sure everyone is as fully served as they’d want to be.  A happy house gets a population bonus, and SteamWorld Build‘s milestones are based on the number of residents, so it’s vital to top everyone’s happiness off.  Once these basics are down it’s time to fix the mine shaft, at which point the second type of gameplay kicks into gear. 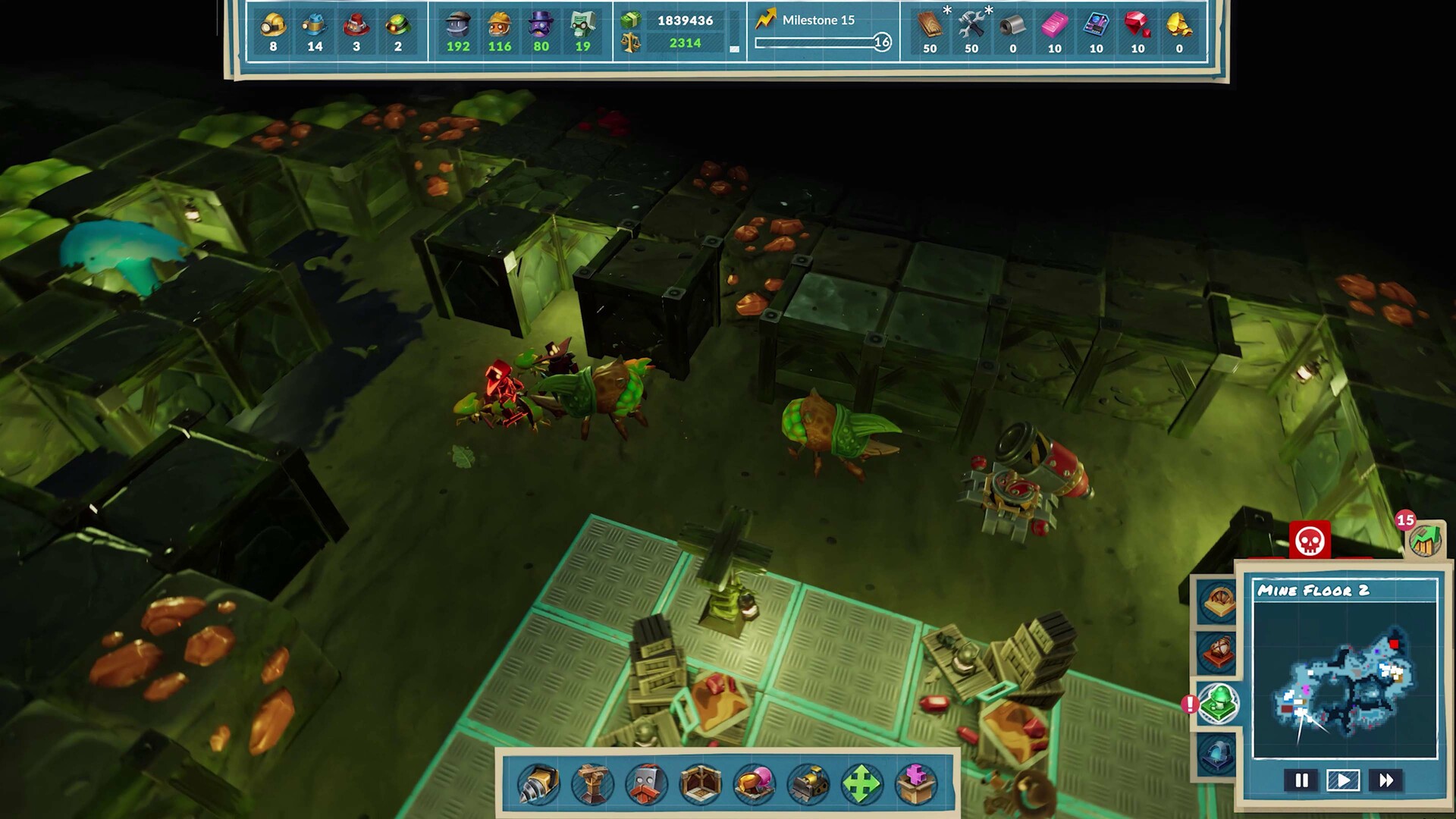 The mining section plays out like a less sadistic version of Dungeon Keeper, in that you’ve got multiple types of workers needing living spaces and other support rooms to do their jobs.  Miners do the basic digging, prospectors gather resources, etc.  The mine also introduces a new type of currency required to build fancier infrastructure up top, such as paved roads that provide a much greater area of effect for shops and other happiness-making services.  You can switch between the town-building and mining at will, and while the two feel like completely different games what ends up happening is that they somehow work together as a constant and welcome switch-up to the gameplay.

While there’s no release date yet for SteamWorld Build, the demo is available on Steam and easily worth an hour or two of play.  The reveal trailer shows a huge number of systems far beyond what’s hinted at in the demo, including more modern buildings, attackers deep underground and a huge number of buildings that most likely provide necessary services but also go towards making the sprawling town become a bustling, chaotic urban robot settlement.  The mine needs the town and the town needs the mine, and between the two of them they should just be able to send the robots to the stars.