“Well, that just leaves the door open for someone else.” So often this has been the take-away with any game, no matter the quality, that has taken solace in simply doing one established thing (or maybe even a number of things) well. Rather than completely, radically or otherwise, altering the conventions we’ve all come to expect, one way or another. It would be foolish to assume to expect that every game is attempting — let alone succeeding at — a reinventing of the figurative wheel. But as the years roll on and those two staple energy bars of red and green become a common staple among many an action RPG, there comes a point where you think, you hope, some form of fresh interpretation is bound to pop up. Naturally, it’s a popular design standard in the field and one that even on its own immediately sparks many a suggestion of challenge, difficulty and means to test one’s self with whatever it is a given developer or studio wants to throw at us. We’ve long past the age where keeping one’s solitary health bar is of utmost importance to survive. It’s that accompanying stamina bar that has now reshaped and retooled the necessity for skill and awareness. In this, a modern age where role-playing and combat needn’t be shackled to some structure of “turn-taking” or planning for long-term strategy.

And then a game like Eldest Souls comes along and seems to ask with a devilish ponder: “but what if it was?” What if we — in this case developer Fallen Flag Studios — refrain from giving players the ability to so freely slash, swipe and possibly spam their way to victory. Mindful of when to duck and dive out of danger they may be. What if (and I’m sticking with this descriptor) combat felt more like a turn-based affair than it did a real-time, let-loose affair? I have to admit I was both giddy and a touch apprehensive on sharing my unhinged, unfiltered (and potentially over-worded) thoughts with members of the team this past week. Sitting down to preview an extended build of the demo offered up as part of last year’s Steam Game Fest. A demo with which was the first time I was made aware of Eldest Souls — a demo I came away from both entertained by and surprisingly enthralled by its indescribably off-kilter approach to combat. How Eldest Souls truly feels like one of the few games in recent years to push the conventions of health/stamina management in action games in a new and interesting direction. 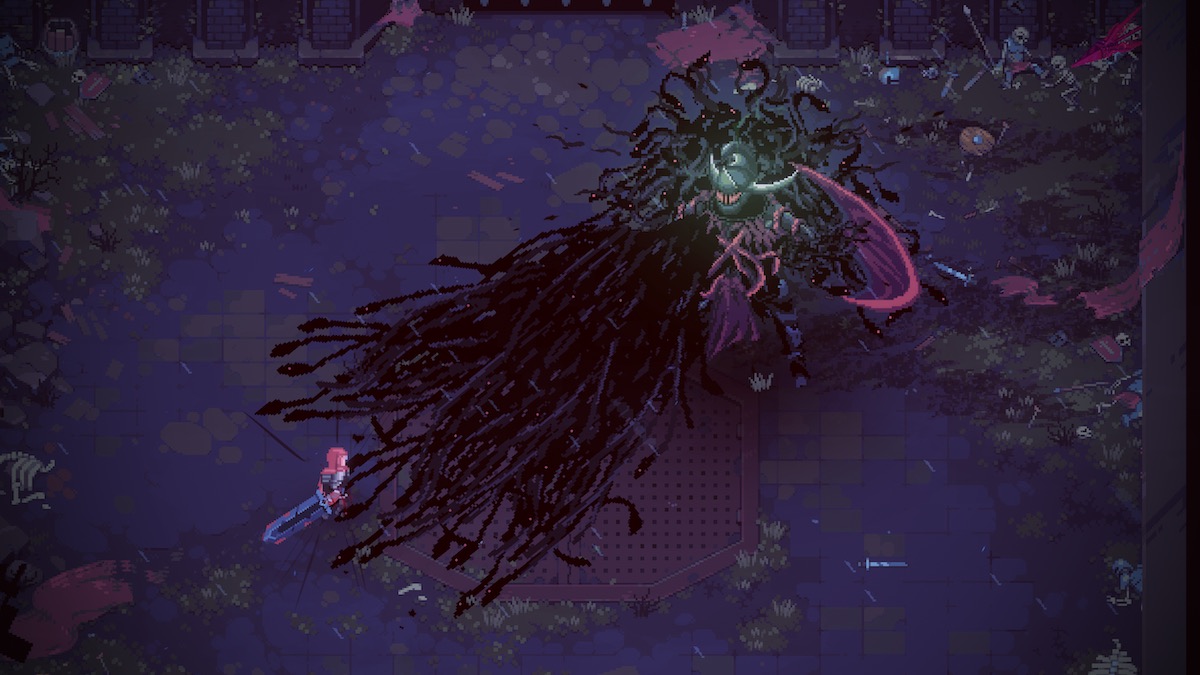 To recap for those who haven’t yet read up on my thoughts last year and/or may be completely a miss as to this game’s pitch: Eldest Souls is the latest, curious trek through ravished, apocalyptic lands amidst a well-populated sub-genre where ruinous settings and real-time combat tend to strangely go hand-in-hand. Indeed, already you may presume that even on initial premise, the material is relatively worn, if met still with modest intrigue as to how it can be handled. Not least in a game like Eldest Souls with its pixel art focus and top-down delivery of boss encounters. Each one more perilous and curse-word inducing than the last. And sure, you can’t knock Fallen Flag for putting the time into making sprite work pop from out the screen, even for just the briefest of attack animations. But well-executed animations and a dazzling variety of visuals to match have (for all the right reasons) become a sort of standard in the world of smaller-scale, independent releases. And then add on top the expectation from us, the player, for these kinds of games to house peril, tension, parts meant to trip us up in that familiarly-punishing way. Players demand boss fights that push us to our limits and many a studio over the years has answered such a call.

So when I asked the team if they felt any sort of pressure to meet, let alone exceed, the expectations of players — given how we’re all so familiar to this cunning way of designing action games — I was surprised to hear the opposite. No, was the response. As Fallen Flag explain to me (coincidentally as I’m on the verge of but yet another death at the hands of the third boss), pressure never seemed to find its way into the equation. The team’s intentions were always to find a happy-medium between their own personal niche’s in the grander action genre. Between the Dark Souls and the Devil May Cry’s of the world — contemporary highlights like The Game Bakers’ Furi also pop up. A stark contrast in aesthetic and style you might think at first, but actually, when we finally get into the promise of the actual combat mechanics makes complete and total sense. 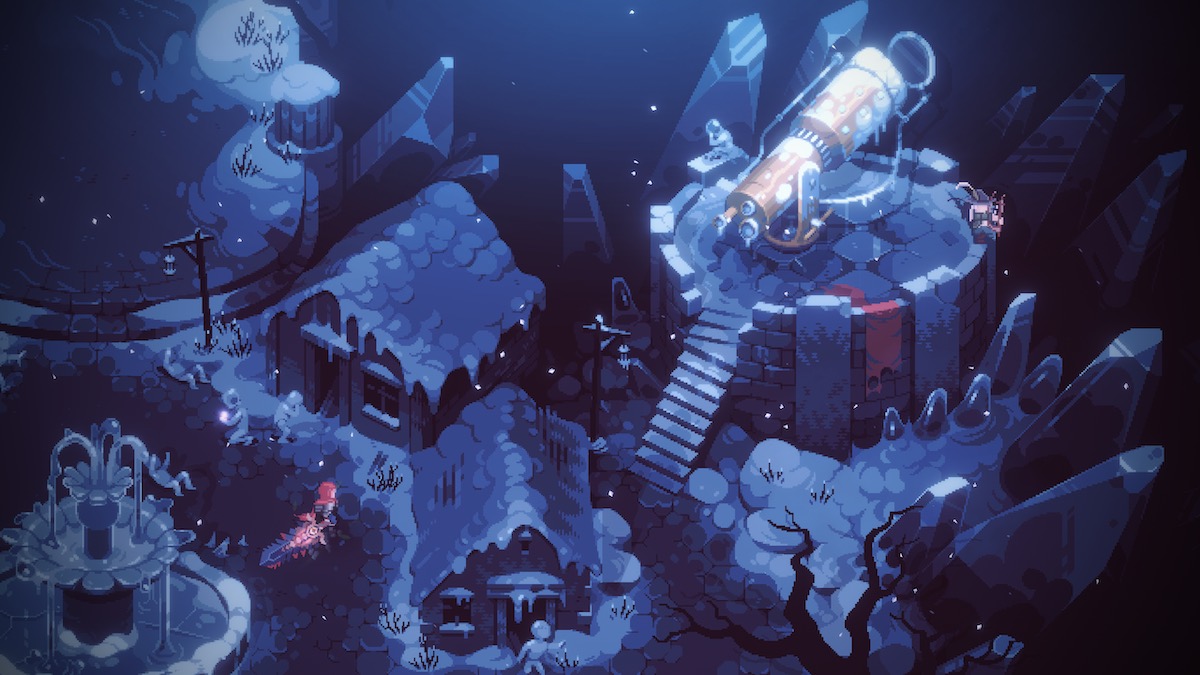 Of course, Eldest Souls is a game about battling through the inevitable racking-up of deaths, in finally — at last — achieving victory. An elated mind-set that quickly settled in during my time coming face to face for the first time with this build’s newly-unveiled third fight. And yes, this is just the third encounter of the game and even from as early a period as that implies, Eldest Souls already finds ways — in terms of its enemy attacks — to be both varied and lethally so. But while the spectacle of the encounters are enjoyable on their own, what gives such moments the edge is the way offense and defense is handled in this game. How, in order to simply strike at a foe, players must carefully aim/position their sword slashes when their attack meter reaches a certain point. Doing so instigates what the game denoted as “Bloodlust,” a kind of frenzied state that not only increases one’s attack power, but also allows you to regain lost health from enemies. A vital asset, given it’s the only means with which players can recover from a costly hit or ill-timed move. Unlike most games of this template, Eldest Souls does not have the obligatory healing item with a set-number of uses. Nor does it have, outside of unlockable skills that can be customized and reset at any time, consumables that can be used during a fight to mitigate damage in whatever way.

Eldest Souls is challenging, but it’s challenging in an entirely new and inventive way that I’ve seldom seen incorporated in games like this. Where the very enactment of combat is more tactile, calculated. Knowing when, let alone where, to strike. Timing not just one’s dodges, but more importantly one’s opportunity to charge that vital strike to reactivate Bloodlust. And lest we forget: trying one’s best not to spam that precious stamina away as you so often would in a frantic moment of hoping, above all hope, that you won’t die. Made even more demanding by the fact Eldest Souls, much like the absence of a main healing item, ditches the concept of a stamina bar per se, instead sectioning off said bar into three opportunities that charge over time. So while it may be all well and good to tap dodge-dodge-dodge to stay well clear of an enemy’s attack, should that foe close the gap thereon and decide on a more close-quarters strike, you’re a sitting duck. 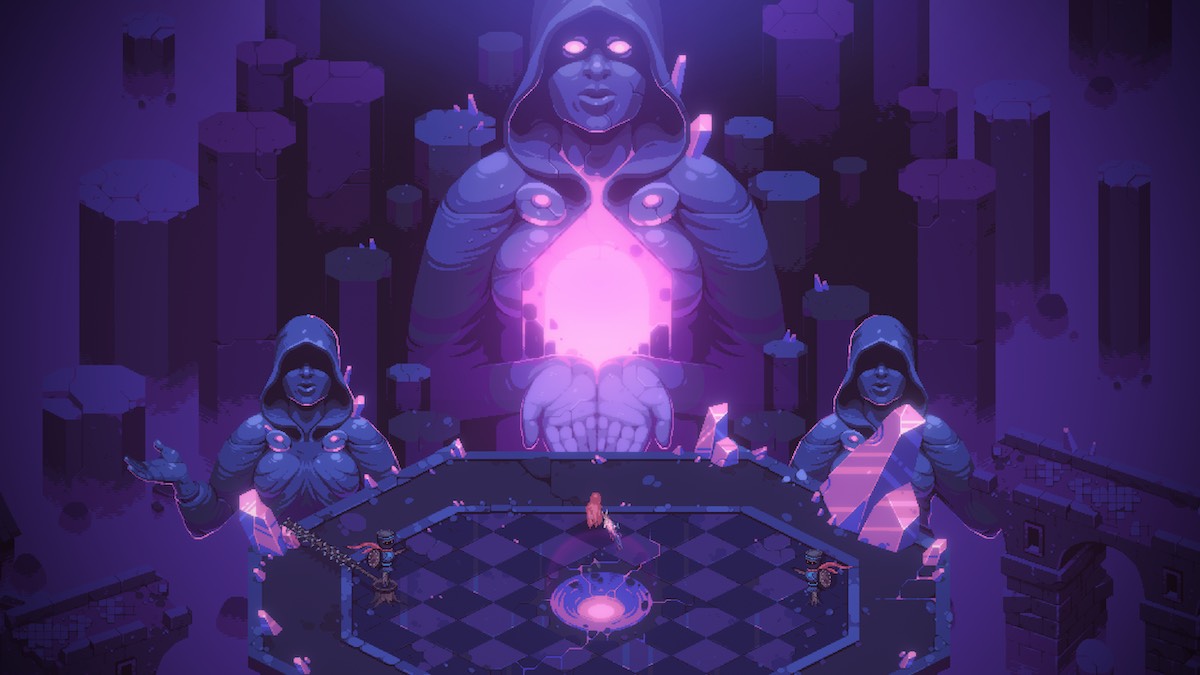 It’s for this very reason why “turn-based” or variations thereon have been so stuck in my head whenever I looked back on my time thus far with Eldest Souls. How the game almost feels like it’s framing itself equally as some progressively-unfolding, thematic encounter in a JRPG, let alone a real-time, free-flowing encounter in an arena. How gameplay seems to unravel in a back-and-forth, tug-o-war between yourself and the enemy. You make a move, the enemy responds, you then counter, etc. It’s a game where the term “slow-and-steady” takes on a whole new meaning. Safety and assurance through one’s lack of greed when it comes to available hits — how that encroaches evermore on your thinking as you decide to sit back. Waiting for that additional section of stamina to regenerate or time when you know for certain a fully-charged strike is doable.

All this is without even going into the nitty-gritty that is having finally memorized a given boss’ attack patterns. Out of both courtesy and sinister delight, I won’t spoil the details, but let it be known that Eldest Souls‘ third (let me repeat, only the third) fight already showcases truly perilous and stressful moments of quick thinking and quicker reflexes. And I’m not just saying this because (so I was told) I was the first, at the time, to actually beat it: Eldest Souls‘ potential to be one of this year’s dark horses, has only grown more so. Perhaps the best way to end this on is simply this: Fallen Flag look to have struck gold with what feels like a unique interpretation of combat mechanics in a modern-day established sub-genre that is the action RPG. Calculated, methodical, yet consistently rewarding as a result. And it could mean Eldest Souls walks away by the end of this month as one of 2021’s stand-out releases.