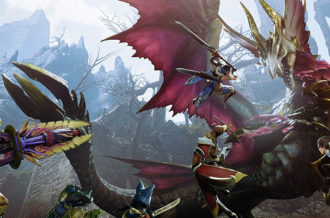 Call of Duty: Modern Warfare II may share its name with the 2009 title, but its subject matter is far from it. While the 2009 title saw the start of World War III, the 2022 title aims to keep things slightly more grounded. It’s more a globe-trotting tale of espionage as Task Force 141 races against time to stop the villainous Major Hassan from enacting his plans. But, of course, that doesn’t mean the campaign won’t have its own share of bombastic moments. 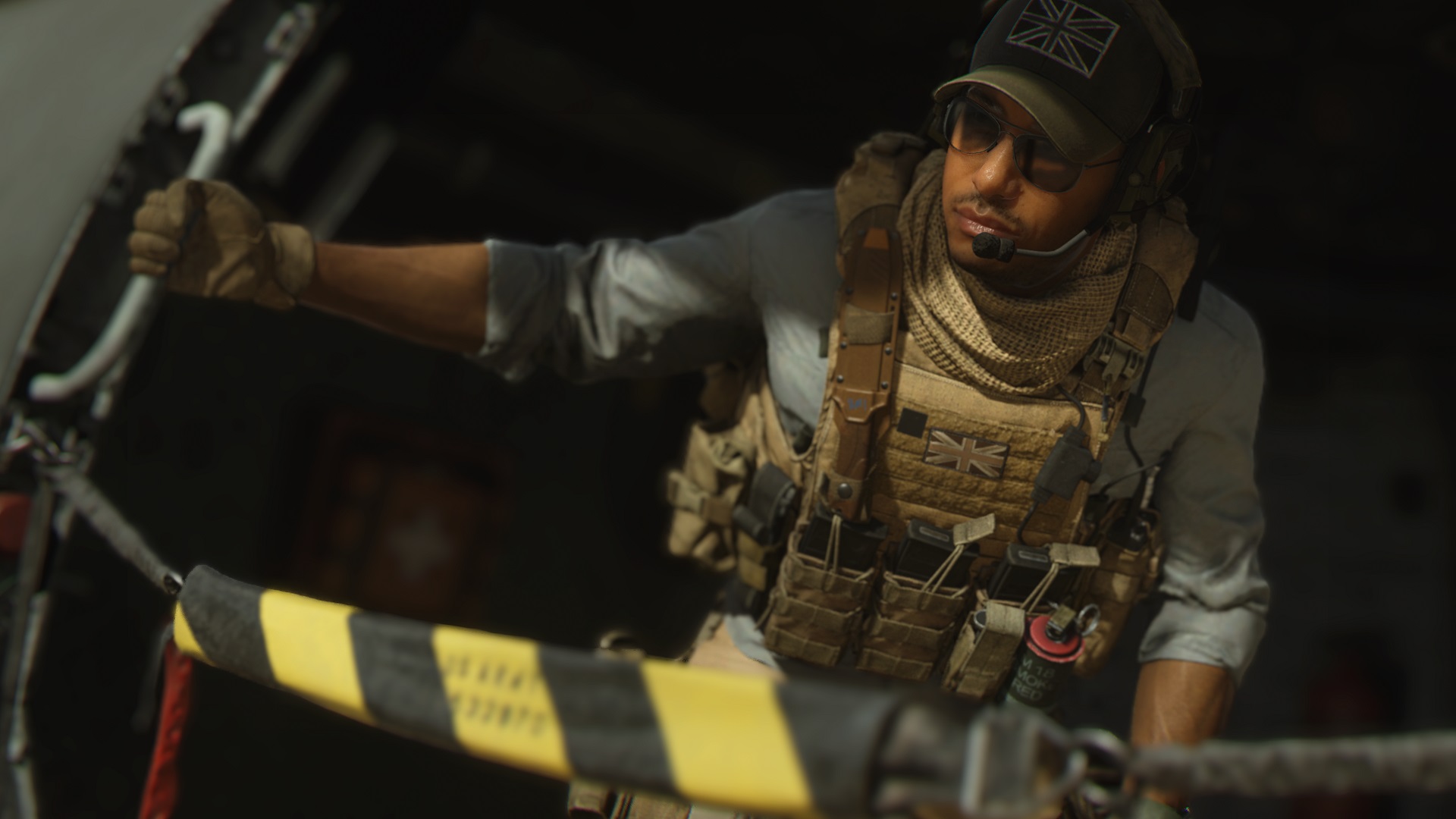 Modern Warfare II picks up three years after the events of Modern Warfare 2019. Al-Qatala has grown into a dangerous, well-organized organization under the eye of Hassan. With the fate of modern civilization in the balance, Task Force 141 must travel around the world to uncover and put a stop to his plan. The game features the return of Captain John Price, Sergeant Kyle “Gaz” Garrick and CIA Station Chief Kate Laswell from the 2019 title. Meanwhile, original Modern Warfare trilogy alum Lieutenant Simon “Ghost” Riley and Sergeant John “Soap” MacTavish make their proper debuts after appearing in Call of Duty: Warzone. Finally, newcomers Colonel Alejandro Vargas of the Mexican Special Forces and Corporal Phillip Graves of the PMC Shadow Company round out the cast of characters.

Infinity Ward showcased two levels while also briefly discussing two others. According to the studio, much of the thought behind the levels was creating brand new scenarios and finding new ways to remix classic scenarios. The first example of this came from Mission: Nightwar, the very first mission in the game.

Infinity Ward has had night stealth missions and rescue missions, but Nightwar is the first time they mixed both together. In it, Task Force 141 infiltrates a compound they believe Hassan is hiding out in. The mission starts innocuously enough with players infiltrating and utilizing the same night vision tech that debuted in Modern Warfare 2019. Then, suddenly, the night sky lights up with gunfire and missiles. Alpha team’s chopper is shot down and it’s up to you and Ghost to infiltrate several houses and relieve pressure on your downed allies. 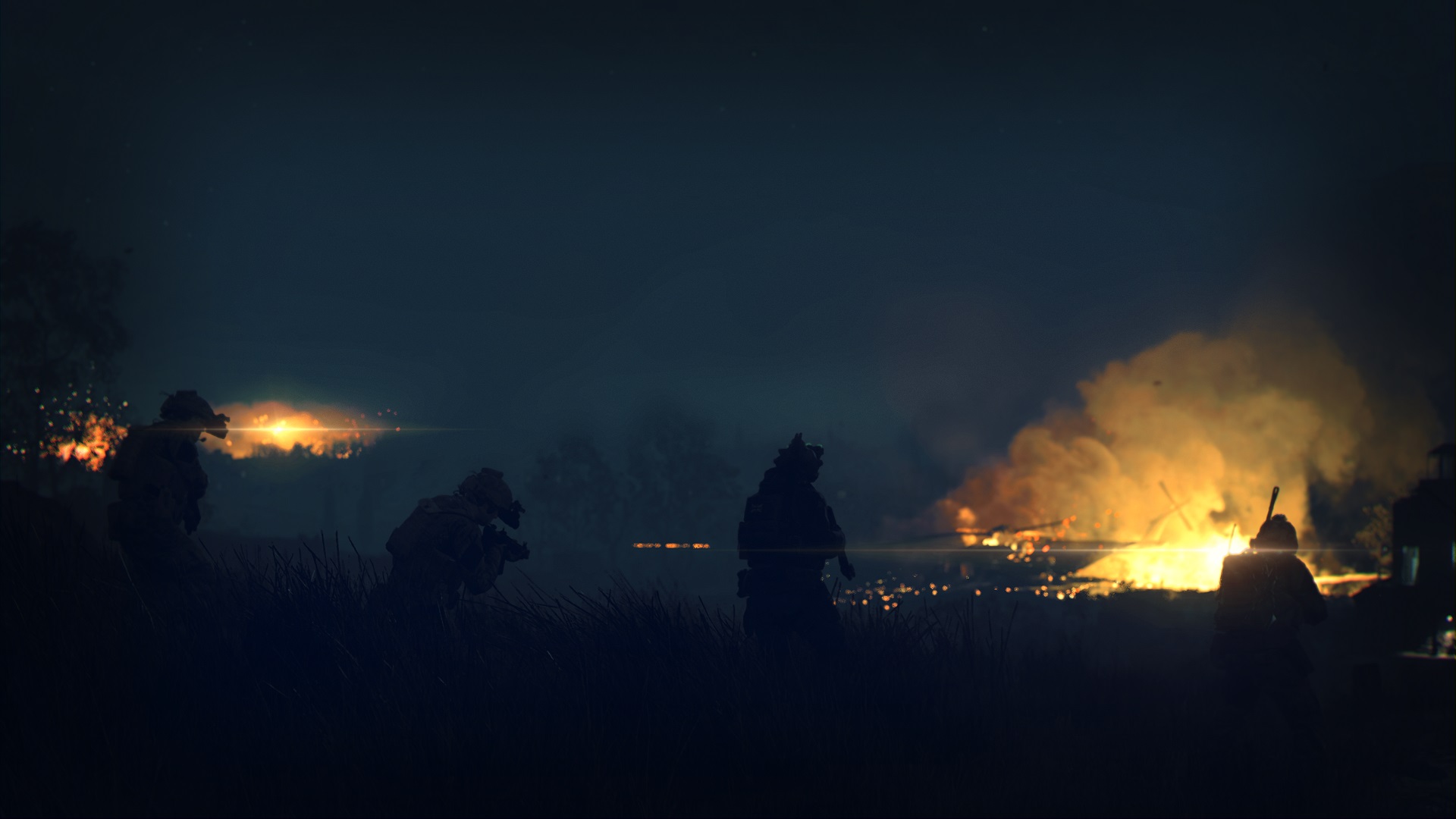 It’s an intense mission with players balancing the need for night vision versus relying on lighting in the buildings. The mission also serves as an excellent showcase for the new AI systems. Infinity Ward has worked extra hard on AI this year, giving them a high level of environmental awareness. We witnessed allies checking every blind spot and maneuvering around the world cautiously, something they’d refuse to do in previous Call of Duty titles. The mission ended with players hunkered down in the chopper, defending against enemies approaching from the tree line.

While Nightwar focused more on action, the next mission focused more on stealth. Mission: Wet Work, the second mission in the game, takes place in Amsterdam with Task Force 141 attempting to uncover Al-Qatala’s smuggling partner. To do this, Price and Gaz must utilize the water in a port to sneak around, take out enemies and ultimately uncover the smuggler.

That’s correct; water and swimming mechanics return to Call of Duty. Previously used in Call of Duty’s Ghosts, Black Ops III, Black Ops 4, and Black Ops Cold War, swimming in Modern Warfare II appears to be a significant upgrade from those titles. Redefining how water looks and reacts to your character and the world is an essential pillar in Infinity Ward’s game design. You’ll experience fine water simulation with caustics, refractions and light transmission when playing the campaign. In Wet Work, we witnessed Gaz using the darker parts of the water and vegetation to lose the enemy’s line of sight. In other levels, the type of water you swim in (i.e., murky versus clear) will significantly impact how you approach combat situations. The mission ended with a stealthy assault that went loud and involved grenades sending water flying everywhere. 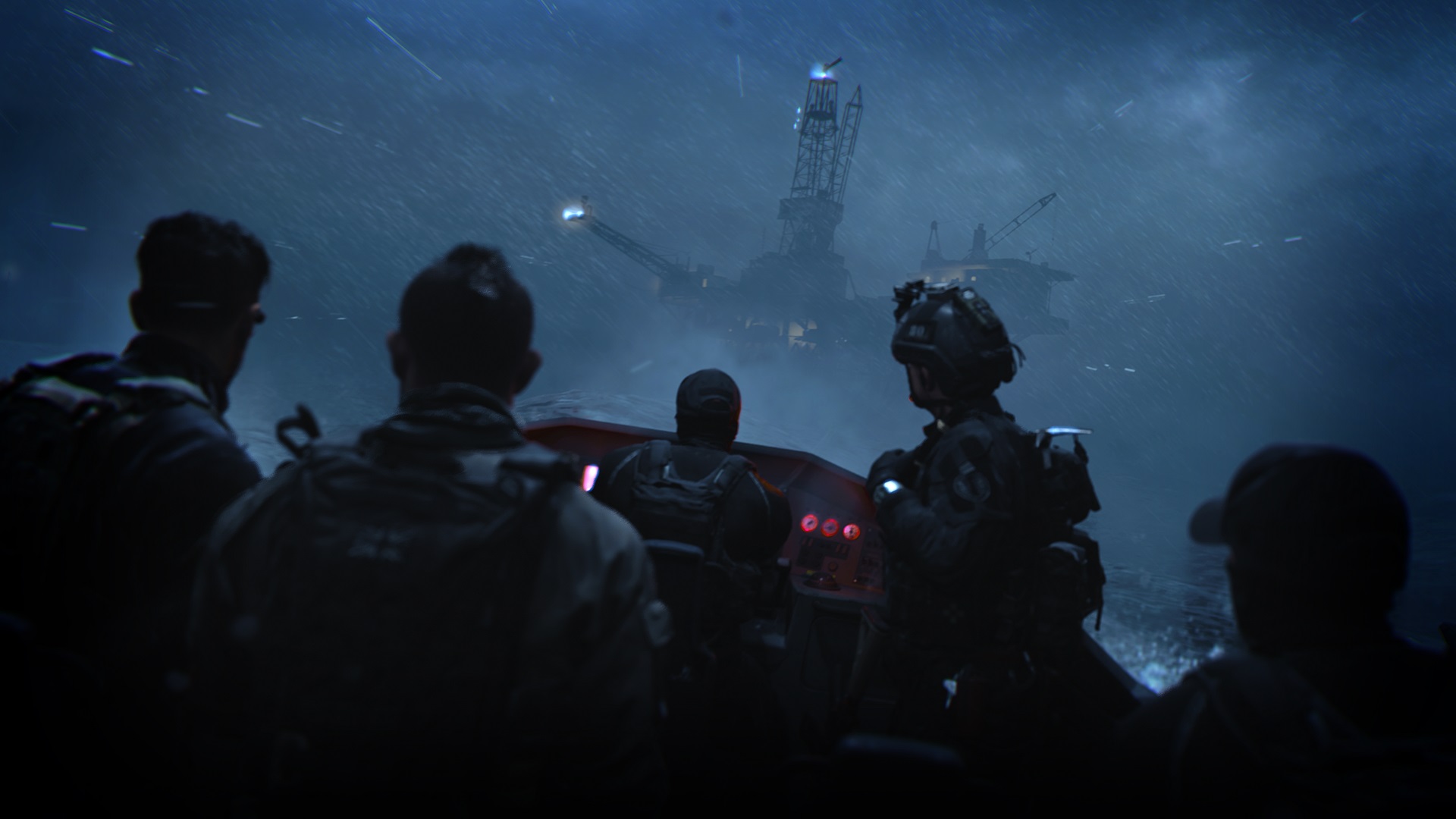 The demos showcased were running on PS5 code, and it was an impressive showcase for the water effects, though it did raise questions about how the game will look and run on PS4 and Xbox One. Performance weighed heavily on the mind when viewing Mission: Convoy. Heavily inspired by Uncharted, this mission sees players jumping across car and truck rooftops, highjacking vehicles, shooting out of windows, and driving at high speeds. It was an impressive first-person take on Uncharted 4 and Lost Legacy’s driving sections, and we have confidence it’ll run at 60fps on PS5 and Xbox Series X|S, but it did leave us worried about how this game will perform on last-gen machines.

Finally, our last look came from Mission: Tower, which takes place in Chicago and sees Task Force 141 racing to stop Hassan’s revenge and is a remix of sorts of ‘Federation Day’ from Call of Duty: Ghosts. Here, players rappel down the side of a skyscraper, taking out enemies and rescuing hostages. While ‘Federation Day’ was primarily a stealth mission, Tower is a setpiece with plenty of shooting and explosions. 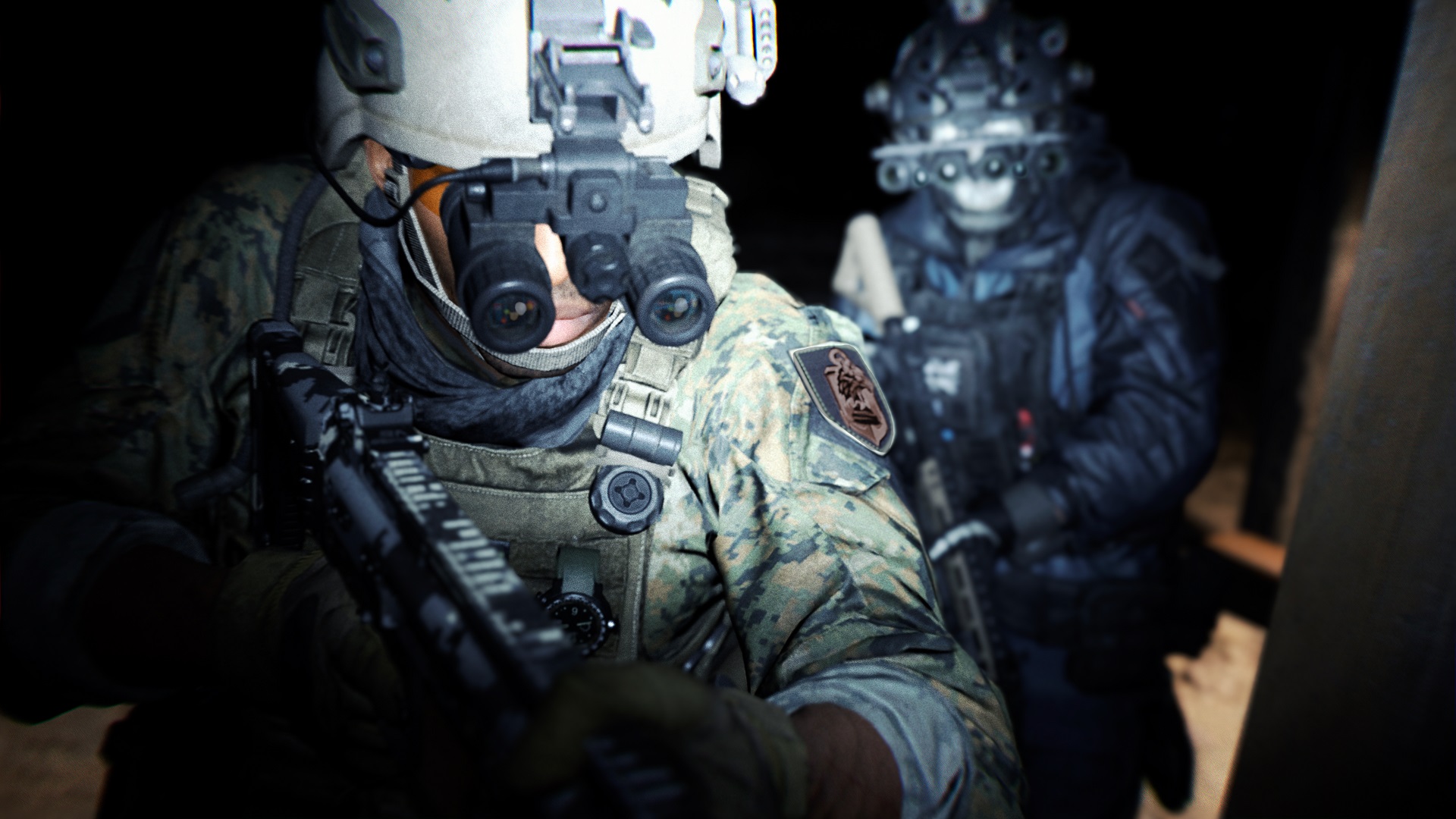 It’s true that players mainly buy Call of Duty titles for the campaigns, but as we saw with Black Ops 4’s reception, there are still plenty of fans who enjoy the campaigns. Call of Duty: Modern Warfare 2019 represented a step-back for Infinity Ward, choosing to tone down the bombastic action in favor of more grounded yet still intense missions. It mostly worked with captivating sequences like the townhouse attack or stealth invasion of the manor. Call of Duty: Modern Warfare II appears set to build on that while including more spectacle without going overboard like the original Call of Duty: Modern Warfare 2. So far, this looks like an exciting globe-trotting adventure. Now, we just need to see how Infinity Ward gets this running and looking good on PS4 and Xbox One and how the team creates a cohesive narrative around what we’ve seen.

Call of Duty: Modern Warfare II launches October 28 on PS5, Xbox Series X|S, PC, PS4 and Xbox One. For multiplayer, be sure to check our write-up on what to expect from the new era of Call of Duty. To learn more about the campaign, check out our interview with Infinity Ward’s Brian Bloom and Jeff Negus.