It’s not exactly a shocker that we’ve been quite the fans of Strafe ever since it first debuted. Pixel Titans and Devolver Digital’s loving ode to the Quake era of shooters has just seemed like an absolute blast of old-school fun ever since we first checked out its Kickstarter campaign, and enthusiasm for the blocky, 32-bit-styled FPS has only increased since then, as our recent preview can attest to. But as it turns out, it isn’t the only blocky, old-school, ’90s-inspired FPS on the block. Developer David Syzmanski has his own one-man show on the way with Dusk, a retro shooter throwing dashes of Hexen, Redneck Rampage, and others into the mix as well. But does it indeed have what it takes to go toe-to-toe with Pixel Titans’ soon-to-be indie juggernaut?

Set in the American Northwest, Dusk begins with you hanging by a meat hook in a barn, freeing yourself, grabbing two sickles, then immediately having to fight off three gargantuan hooded men wielding chainsaws. And from there, it only escalates as you fight through a cavern-filled farm where you soon find yourself attacked by magic-wielding cultists, a militia, and evil scarecrows that come to life. Why is all of this happening? Well, that’s for you to eventually find out, preferably with the help of a crossbow and a pair of shotguns, among other things. In contrast to Strafe being more sci-fi-oriented, Dusk favors a more supernatural angle, with fitting aesthetics and a heavy use of darker colors (fitting for the such a throwback, for better and for worse). 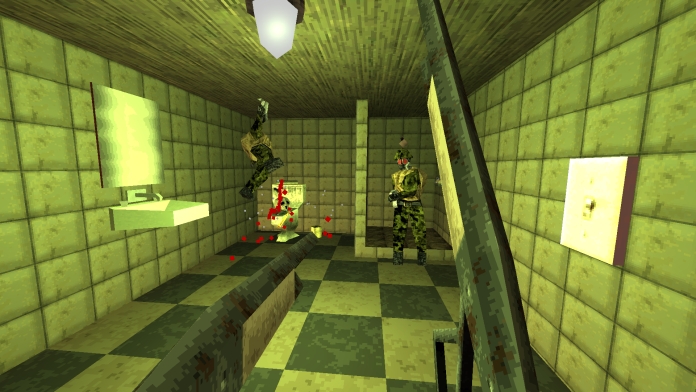 As expected, the game itself controlled simple yet amazingly well. Speed is also the name of the game here, zooming around like the floor was joyfully coated in butter. The demo had showcased both the game’s Endless Mode and the first level, and in both cases it was indeed a nice, old-school challenge to try and take down as many of the forces in your path as you can, which always felt imposing but never impossible. The controls for picking up and moving around objects to reach items on higher levels could use some adjustments, though (physics not exactly being a strong suit of shooters from back then). Basically, Dusk captures the spirit of those older FPS games perfectly, right down to the secret passages and doors found by interacting with the walls and the use of the classic IDKFA Doom code.

So can Dusk compete with Strafe in the battle of the ’90s FPS throwbacks (which we honestly weren’t expecting)? Well, having had some hands-on time with both, I would say that Strafe is looking and playing just a bit smoother, so it still has the edge for now. But that said, Dusk is still shaping up to be an absolutely terrific retro shooter as well, one that brings back those nostalgic memories of the ’90s. It basically is just pure fun and is less Strafe’s competitor than its equal. Both are looking amazing, but Dusk is the one that may slip under your radar, so try not to miss it when it comes out for the PC in 2017 courtesy of New Blood Interactive.