I wouldn’t blame tinyBuild Games had they decided to rest on their laurels a little in 2017 following a rather active past twelve months. 2016 saw no fewer than fourteen titles go through the process of getting released or otherwise announced, which in another light could equate to around maybe four or even five years worth of projects for the more bigger publishers out there. Granted, tinyBuild aren’t exactly honchoing AAA bonanzas with millions of dollars on the line, but the one thing they have going for them is their clear focus for a space in both the gaming market as much the consumer psyche. Perhaps that’s why I’ve spoken rather highly of them in the past and why I consider their efforts in the industry to be on a productive par with the likes of Devolver Digital. And their portfolio has only broadened because of it, helping independent developers that, while not exactly introducing mind-bending new concepts, still manage to throw up an idea or two that causes you to stop for a second and think: “is this going to be not just my dark horse of the year…but the dark horse”

Independent developers have had a knack of being the ones to throw up something from out of left-field that is so often enthralling, let alone enjoyable. Last year, it was the likes of D-Pad Studio, Dreadbit, Superhot Team and more that carved out, though contrasting concepts, games that excelled because of what they ended up providing rather than merely what they promised. And it feels more and more like the same thing is happening when it comes to Team Shifty’s debut release, Mr Shifty. Be it at E3 or PAX — a humble demo or, as I got to try out these past few days, an assemble of levels that make up just a fraction of the final game’s total 120 level claim — tinyBuild, like so many other publishers, are helping to shine a light on the kind of refined (rather than entirely new) idea you can make accepting nods towards. You know the one, the “there’s definitely something here” kind of nod. 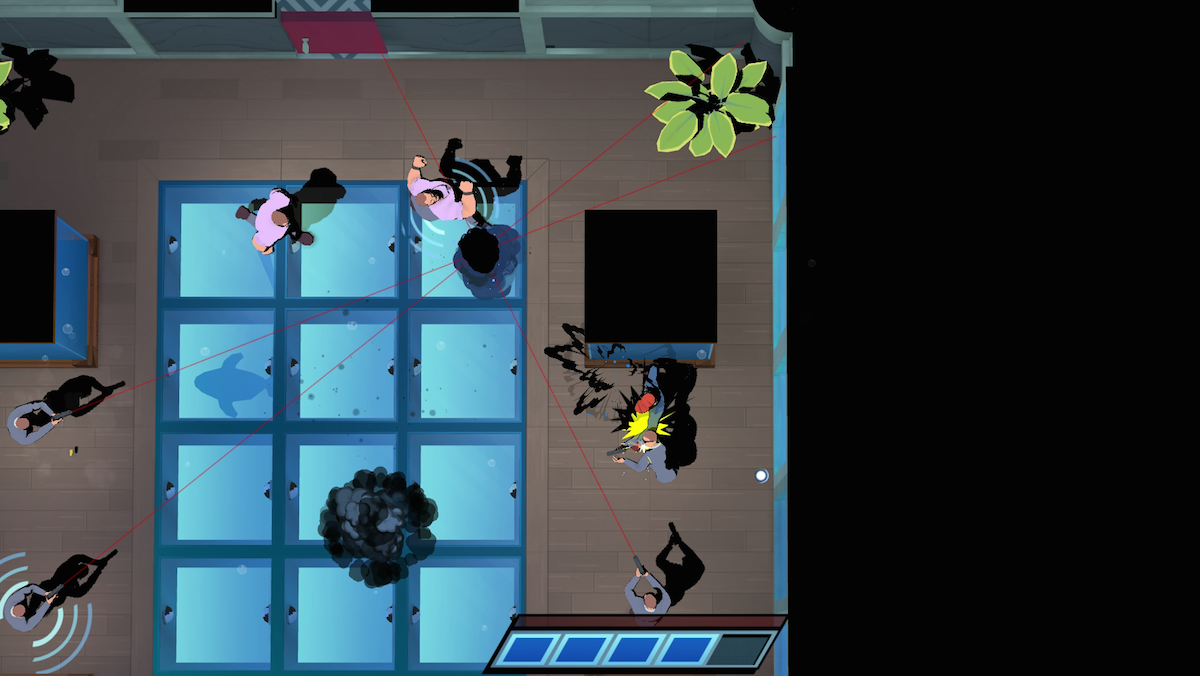 By something, I’m naturally referring to the addictive if mechanically simple premise of phasing from one point to another to not only avoid numerous, perilous deaths but deliver the kind of righteous justice only a comic book crime fighter can deliver. And that’s a right good punch-or-three to the face. If you’re reading this preview of Team Shifty’s current offering than I’m assuming you already know the basic structure of how Mr Shifty plays out: rooms full of cartoony, personality-devoid goons; the ability to quickly teleport over short distances; an attack button…what more needs to be said? Well a fair more actually, given that as I left my laptop-laden first-play of the game half a year ago, an enjoyable taster it most certainly was, there would always be that skepticism that up to now had lingered on — as we made sure to point out when we got a second bite of the cherry at PAX last year. That is, as entertaining a reflex-based (and thankfully not twin-stick controlled) wave-like eliminating of enemies on a level-by-level, floor-by-floor basis, might be…that the question concerning how long the genuine enjoyment would last before the design overall (from comic book-like aesthetic to right-angle shaped rooms alike) would begin to sour, remained.

I’m pleased to say that Team Shifty have, for the moment at least, looked past the dizzying spectacle that is flying around a furniture-filled room like a madman and have ensured that as far as progression goes, Mr Shifty does at the very least throw up new challenges along the way and as a result, conjure new risks that don’t quite equate to simply counting up the number of visible foes on screen. Whether this be automated turrets that fire fast rounds upon appearing in their line-of-sight or precariously-placed exploding barrels (entire rows of them in some cases), the fact these deliberately lethal obstacles actually turn out to be the least surprising unveiling on what players can expect in the final build, goes a long way to expressing how Mr Shifty, as a package, is as much about the short spells of more tactically-sound decisions as it is the longer bursts of endlessly looping shiftshiftshiftshiftshift-die-repeat play-through’s. Naturally Mr Shifty isn’t a game you can simply spam your way through, as we’ve previously discussed, yet it’s also one you can’t just subconsciously recline one’s self into and confide to being all about clearing rooms full of enemies. 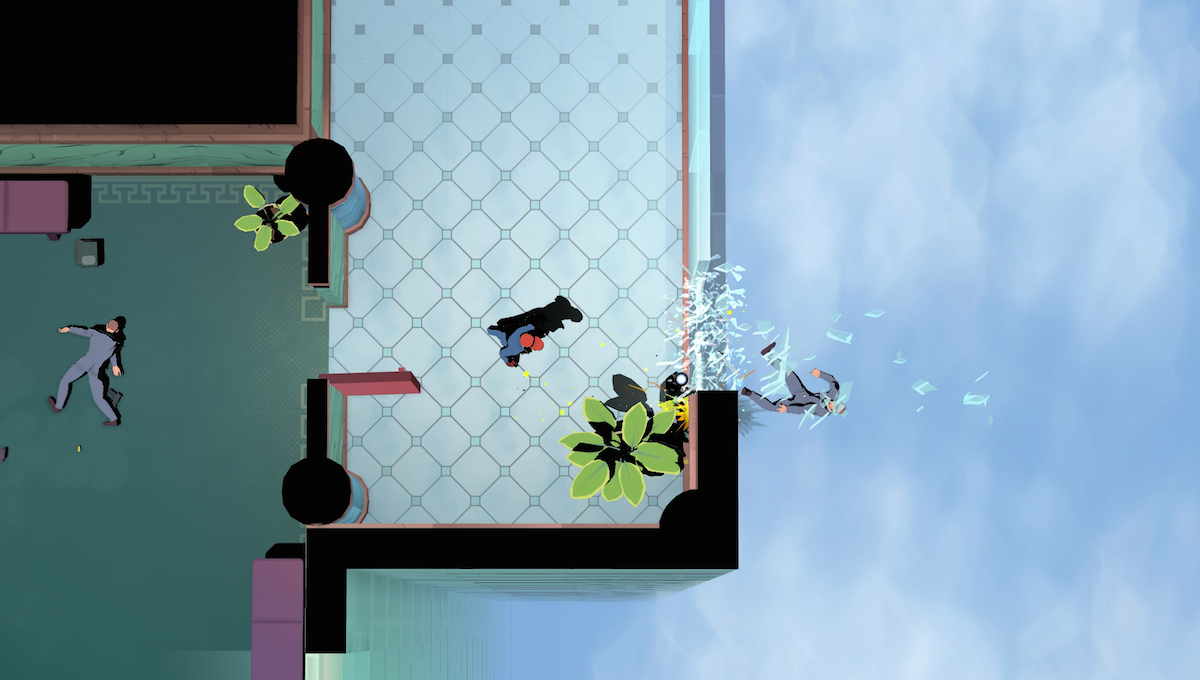 True, that is the main appeal here and I’d be lying if I said retracing one’s step through interconnected hallways and rooms, now littered with dozens (hundreds at some points) of dead bodies, doesn’t raise a somewhat ravenous grin of inner-masochistic delight. But the kind of new ideas that only now I’ve tried out — the ones which I’m more pleased to detail in the recently-released Beta — are those that manage to prevent Mr Shifty from turning into both a visual and indeed structural one-trick-pony. The fact the game feels at points almost like a platformer — even if it does technically maintain the overhead view throughout — as you weave in and out of lasers and even rush down corridors as a salvo of explosions and bullet-fire try to catch you on your six, is proof that Team Shifty themselves haven’t rested on their laurels when it comes to fine-tuning the game’s core melee and agility mechanics as well as coming up with new ideas on how they can be possibly integrated into new scenarios altogether.

Of course, not all said scenarios are relatively as immediate in their appeal (and immediate in finally clearing them after a fair few retries) such as the ocassional “defend the area”-esque round of surviving wave after wave of respawning foes, yet even here Mr Shifty‘s more upbeat, more deadlier teetering-on-the-edge appeal helps spice up what many would consider rather tired set-pieces in a lot of games. It’s a shame that it’s so often these moments that bear most of the brunt of the game’s minor performance issues at present — the sheer chaos on show at points at having numerous AI and visual effects running at the same time causing FPS to fall to around mid-40’s from its once hundred-plus high. Sometimes causing such a storm that it causes gameplay to crash entirely. Not once, but unfortunately twice during my time with the Beta build. 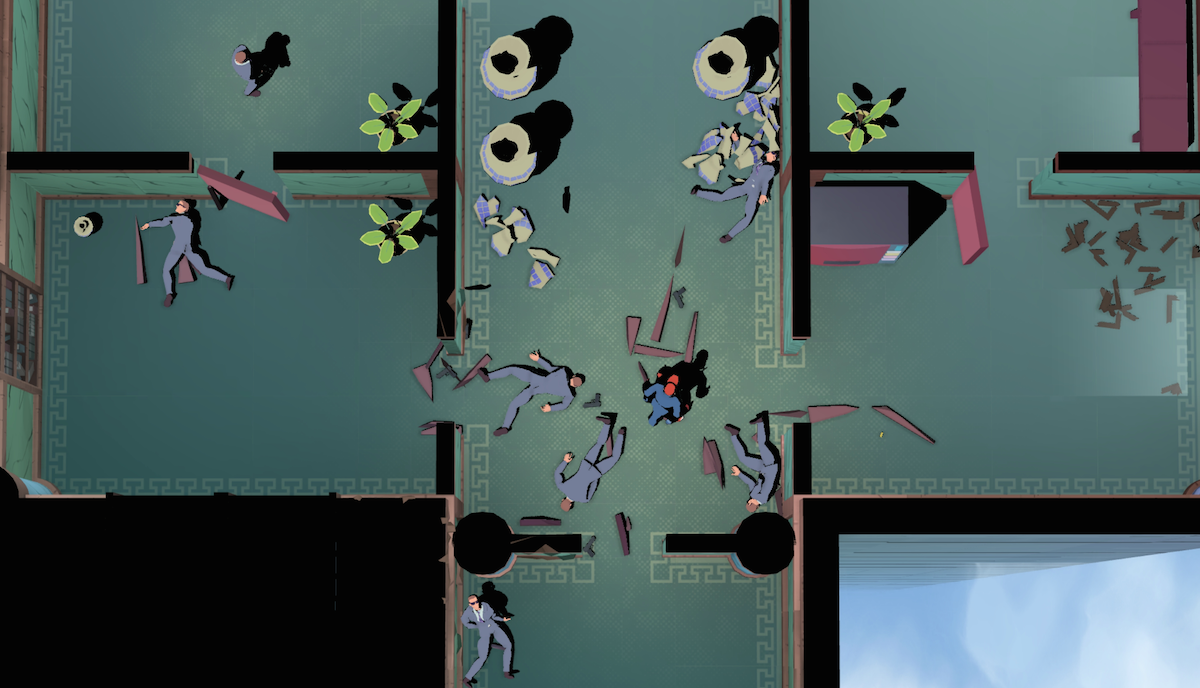 For the most part, Mr Shifty retains its elegance of being a simple brawler with a not-so-simple method of accomplishment in each of its foe-littered floors whom can kill you as much from long distance in one hit as they can at close range. On first look it may appear that Mr Shifty‘s sparse and relatively minimal layout — as far as its level design goes — is a result of an unspecified chosen amount of input/effort on the developer’s side. The reality is that like Hotline Miami before it, Mr Shifty is perhaps cleverly open and spacious so as to invite players into the orderly chaos waiting around nearly every corner. As a means to interest them on first go but also, later down the line, trip them up due to some possibly self-made confidence. Without giving away the finer details, let’s just say the deliberate placement (and indeed coloring) of certain walls/furniture in parts will frustrate. Not at the game, but at one’s self. It’s this reason alone why Mr Shifty has a reasonable chance at climbing, much like the titular protagonist, to the top of indie supremacy later this year.