Only in the world of video games does this preview title make an iota of sense.  Champions of Anteria attempts to combine elements of real time strategy with those of tactical RPGs to create a unique gaming experience.  This tactical real time strategy (TRTS, trademark pending) game takes place in a vibrant and beautiful world, or at least that is how it was described prior to three major factions breaking out in a war whose cause cannot be explained by anyone.

The three major warring factions are the Dune Tribe, which are a nomadic people, the Broken Crown, which were once a band of mercenary soldiers, and the Frost Beards, who are composed of barbarian/viking type of individuals.  The objective of the so called Champions is to bring an end to the three-sided war, which the goal can be achieved by taking down the boss of faction, as is customary in these sort of digital world wars, in a nonlinear campaign.

The world of Champions of Anteria is filled with magic, in which its use plays a substantial role is virtually everything in the game world and is governed by one of five different elements.  The player controls five Champions, each with a unique elemental power which is either Fire, Water, Nature, Lightning, or Metal.  These elements work as a five way game of rock paper scissors, so when selecting the three heroes for load out one should take into account what elements are strong with the enemy in the given level.  These elements not only play a role in the battlefield but also in gathering crafting materials to help build up the kingdom that serves as the primary base of operations.  The Champions don’t gain levels but it is their kingdom that levels up, making time spent building up the home base an important part of the game but that should be expected given its genre. 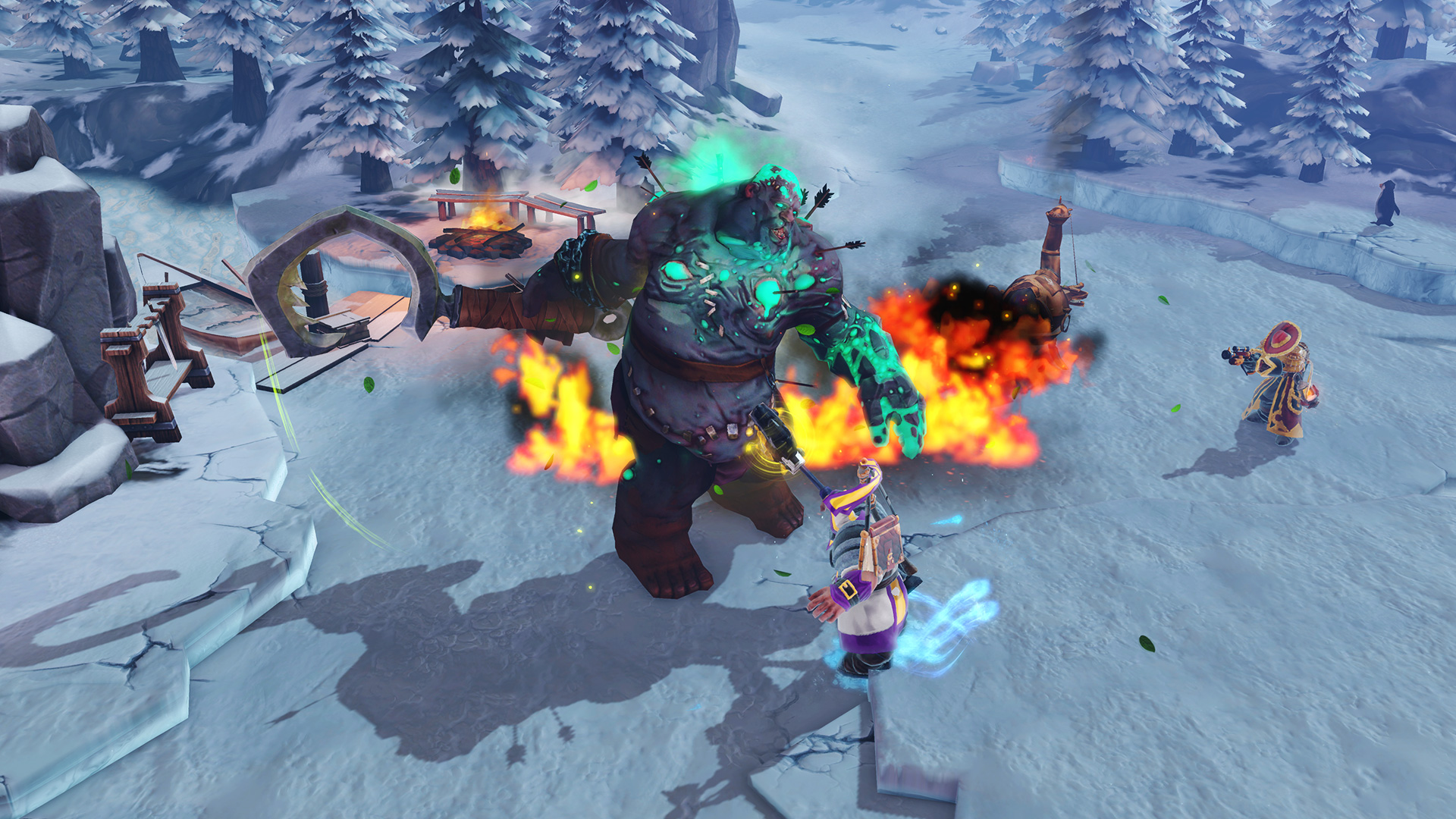 Each turn is the equivalent of one day of game time and one action is allowed, whether this is used to invade or defend a territory.  The world map is divided in four areas, one belonging to the player and the other three belonging to each evil faction.  Each area has several territories within that can be conquered to expand the conqueror’s territory.  With the passage of time each faction gains power which should be factored into how the player wants to go back squashing their mysterious feud.  One approach can be to systematically take out an entire faction before bothering with the other two, while another approach could be to vary who’s the target on the player’s wrath to evenly stunt everyone’s rise to power.  There’s no right or wrong way to win this war, provided whichever approach the player uses puts some thought into it.

When the player chooses to invade or defend a territory the view is presented in a isometric layout.  Using the mouse and keyboard set up the player guides their party of three through the area looking for the objective to fulfill while trying not get killed in the process.  Controlling three characters at once in real time is surprisingly easy with the game’s interface.  Whenever an enemy is engaged the characters will continue to attack on their own until they are given further direction from the player if they are to deviate in their approach.  Even though everyone is assigned an element and different strengths and weaknesses of the enemy are present in each level, playing the “correct” elemental configuration to counter is not required for victory though it does make things easier.  If a player happens to like a particular character’s play style and they’re able to master playing that character, they will still be able to achieve victory through skill even if the element is not the best suited one for the task. 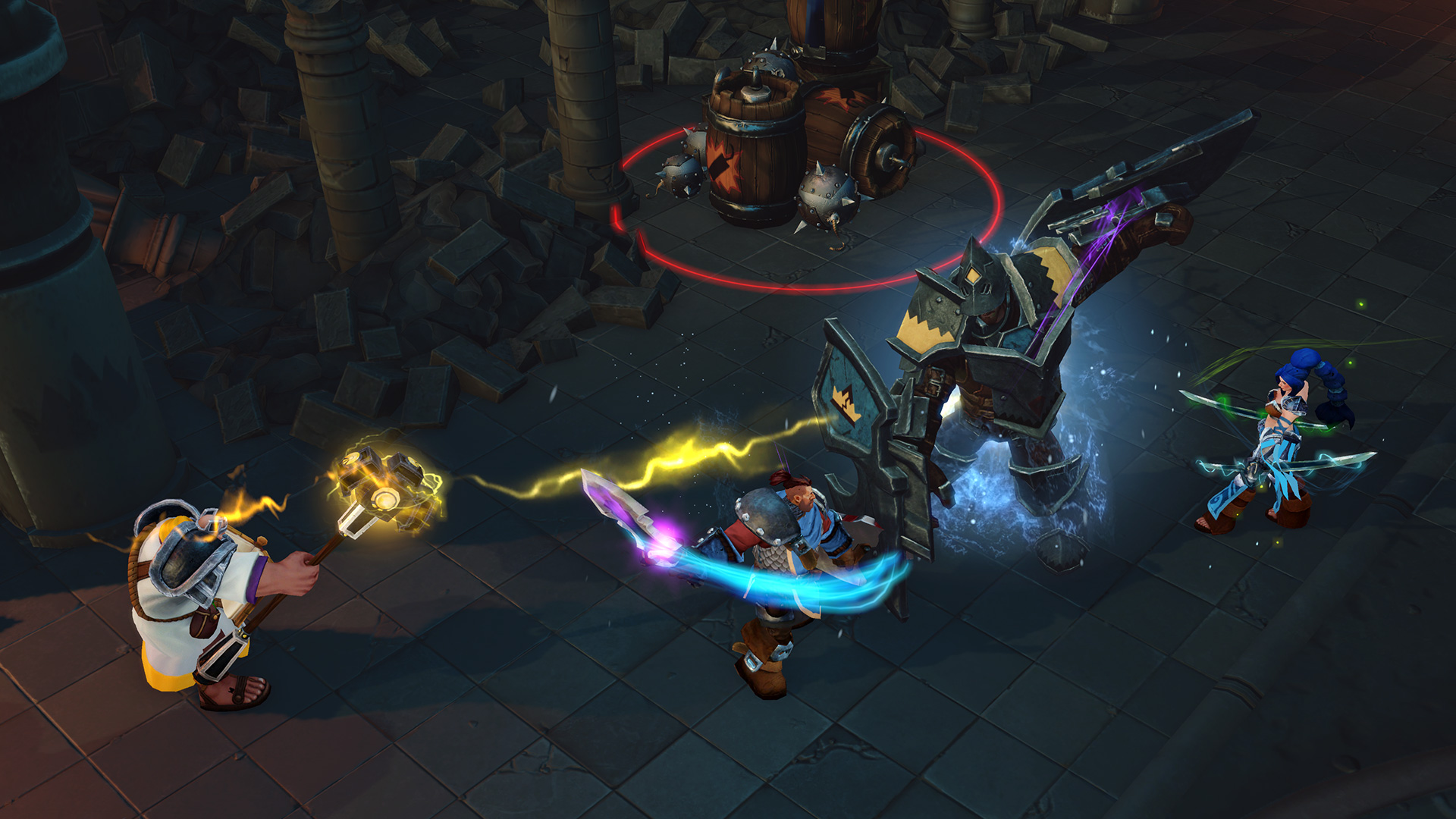 The art design brings the beautiful appearance of the Anteria to life, and even though it’s stated that the beauty was mostly destroyed by the war it is still apparent in its war torn state.  Whether the party is waging war in a great forest or in mountainous arctic tundras, the world is still full of vibrant colors and stunning visuals.  The snarky narrator that explains what is going on in this world, albeit with his own interpretive spin, has the look of a detailed illustration from a children’s fantasy book come to life.

Champions of Anteria promises to be a complex TRTS that can be played pretty much however the player chooses.  With the ability to build up the kingdom through one’s own design and tackle the warring factions in a nonlinear manner, this is a game where the experience will be uniquely tailored based on the player’s decisions and strategic approach, which opens up the game for repeated playthroughs and experimentation.